It’s that time of the year when I’ve finished writing reports and analyzing data and actually get to look at all the stuff I collected last summer.  I’ve just finished identifying my vascular plants and now I get to look at the fungus!  Using the photographs I took of the fresh mushrooms and the notes I wrote up in the field, I settle down at my desk with a hand lens, a ruler and a big stack of mushroom books to try and figure out what I’ve got. 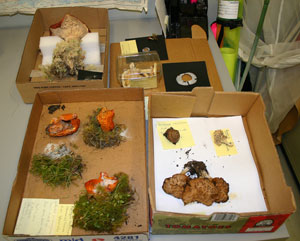 Trays of fungus that I've been identifying. 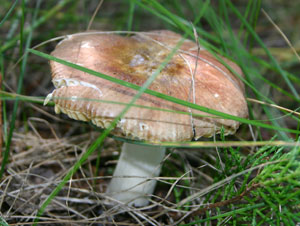 My unknown Russula while still fresh in the ground.

Mushroom identification is a bit different than plant identification because you need to use your sense of smell.  After determining that one of my mushrooms is some kind of Russula, I move onto the species descriptions.  One of the distinguishing characteristics of a candidate species is that it smells “fruity when young and dirty when older” while the other is only “slightly dirty”.  Hmm, how does one ascertain the level of dirtiness?  I’m stumped and decide to move on to the next character on the list: taste.  One candidate species is described as tasting “very sharp and burning” which sounds more like a description of a bladder infection than a gustatory sensation to me.  I decide to skip over the taste part too; I’ve read too many articles about exactly what happens to you if you eat the poisonous ones.  You probably don’t want to know the details: it’s not pretty.  After reading more of the descriptions I finally settle on Russula alutacea and my work on this species is done. 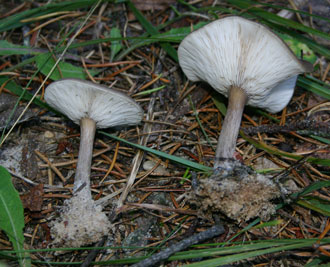 On to the next fungus, which is providing me with a fair bit of grief since it doesn’t seem to have any distinguishing characters at all!  It is beige and light brown with white spores, no volva, no annulus, no partial veil, no bumps.  Plus I can’t really find anything that looks quite like it in my field guides.  I decide to try the internet and come across a wonderful mushroom identification web page by Micheal Kuo (http://www.mushroomexpert.com/index.html).  Using his on line keys I decide that my unknown species could very well be Melanoleuca.  Mr. Kuo writes that identifying species in this genus is nearly as tedious as singing Suzanne Vega’s “My Name is Luka” with the words changed to “Melanoleuca” (http://www.youtube.com/watch?v=yaHeBe9pxkk).  Oh no!  Now I’m going to be singing that song all day.  But the lyrics aren’t quite right.  Ah, here we go “Melanoleuca, it lives on the forest floor, its’ not very colourful, yes I think I’ve seen it before. If you find mushrooms with white spores, flattened caps and amyloid warts, you just might have found this genus, you just might have found this genus, you just might have found this genus”.

As you can probably tell I get a little “office-bound” and antsy this time of year.  It’s actually quite enjoyable to open up the containers that I placed the fungi in earlier in the year because the scent becomes concentrated.  When the container is opened the wonderful earthy, spicy fragrance of the fungus is released and I am transported back to that mossy forest floor where I found it–a nice place to be (even if it is only in my head) on a cold, grey, February day.  Unfortunately, smelling these fungi tends to make me hungry.  Right now I’m craving linguini with mushroom cream sauce and bacon.  Oh well, I guess I know what I’m having for dinner tonight!