The spices we typically associate with Christmas baking, like nutmeg and cinnamon, all grow in tropical areas.  Before the shipping of spices became reliable, they were rare and expensive in Europe, and for this reason used only for special occasions like weddings and holidays.  Many traditional Christmas desserts are made with a variety of exotic spices.  Mulled beverages, like wassail, are prepared by heating the liquid with a mixture of whole spices wrapped in cheesecloth or placed in a tea ball.  The most popular spices are described below.

Allspice (Pimenta dioica)
Allspice is a dried, unripe berry that grows on a small, evergreen tree native to Jamaica.  In the wild, allspice seeds will not germinate until they pass through the digestive systems of birds.  West Indian Arawak and Carib aboriginal peoples were the first to use allspice in cooking.  Christopher Columbus brought allspice to Spain where it was named pimenta, Spanish for pepper.  It is now commonly called allspice because its flavour seems to be a combination of several popular spices.  Allspice is used in British steamed puddings, Scottish Black Bun, mince pies and hot mulled wine. 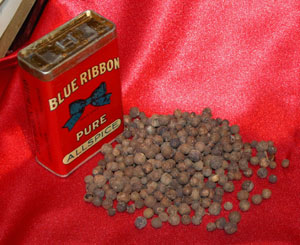 Cinnamon/Cassia (Cinnamomum spp.)
Cinnamon and Cassia are trees native to India and Ceylon.  Cassia is cheaper than cinnamon but not as flavourful.  Once Cinnamomum trees are three years old, the outer bark is harvested.  This distorts their growth forms into dense shrubs rather than trees.  Cinnamon and Cassia have been popular for a long time; Egyptians imported it from China in 2000 B.C. !  Cinnamon is a common spice used to flavour Christmas puddings, cakes, cookies and the Danish pastry Klejne.

Cloves (Syzygium aromaticum)
Cloves are sun-dried, unopened flower buds of an evergreen tree native to the Molucca Islands of Indonesia.  The Dutch originally had a monopoly on clove exports until seeds were smuggled by the French to Mauritius in the 18th century.  Clove oil is used to make vanillin, an artificial substitute for vanilla.  Cloves are used in a variety of Christmas cookies such as German Speculaaas and Pfeffernusse, and are an essential ingredient in mulled wine and hot toddies.  Oranges studded with cloves make popular Christmas decorations. 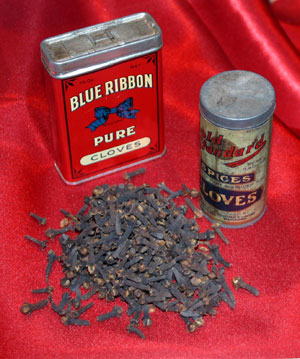 Ginger (Zingiber officinale)
Ginger is the rhizome (an underground stem) of a tropical herbaceous plant native to southern Asia.  Ginger has been cultivated for over 3000 years!  In Asia, ginger is mainly used fresh or pickled in savory dishes, like curries and stir-fries, but in Europe it was traditionally used dried in desserts like gingerbread and gingersnaps.  This is because, until recently, ginger was not sold fresh in other parts of the world.  Ginger is also sold crystallized and coated in chocolate, another popular Christmas snack.

Nutmeg/Mace (Myristica fragrans)
These two spices are derived from the same species of evergreen tree.  Nutmeg is the hard stone inside a fleshy fruit similar to an apricot, while mace is the fleshy net that covers the stone.  The nutmeg tree is native to the Molucca Islands of Indonesia where it is a major cash crop.  This species is pollinated by small beetles that are deceived into thinking that they will be rewarded with pollen or nectar.  Nutmeg flavours British fruit cakes and mince tarts as well as the Italian Certosino cake and is the traditional garnish to a glass of egg nog. 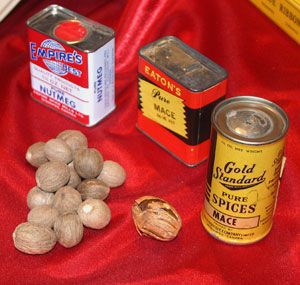 Nutmeg is the "nut" and mace is the "net" that surrounds it.

Saffron is the world’s most expensive spice, recently selling for $18,000 CN per kilogram!  The tiny orange threads are actually the stigmas, or pollen-receiving organs, of a crocus flower that is native to southwest Asia.  The stamens on these tiny flowers must hand harvested, which is extremely expensive.  Fortunately, very little saffron is needed to add flavour and colour to a dish.  The Scandanavian Lussebulle or saffron buns are traditionally made on St. Lucia’s Day, December 13, and served by young women dressed in white.

Vanilla (Vanilla planifolia)
Vanilla is an orchid native to Central America.  The vanilla “bean” is a fruit called a capsule.  Vanilla beans are cured after harvesting, a process that takes six weeks.  The beans are sold whole, or steeped in alcohol to produce extract.  The Aztecs of Mexico mixed vanilla with chocolate to produce a tasty beverage.  The Spanish conquistador Hernando Cortez brought vanilla to Spain in the 16th century.  Vanilla from Central America is naturally pollinated by wild bees.  Madagascar vanilla on the other hand, must be hand pollinated as there are no suitable wild pollinators in Africa, resulting in a higher price.  Vanilla is the main flavouring in Christmas desserts like the Ukrainian honey cake, Medivnyk. 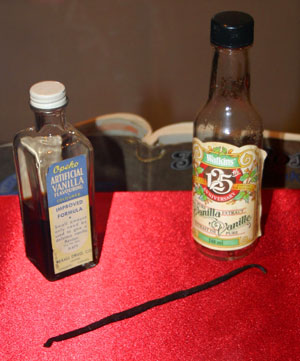 Vanilla "beans" are actually orchid fruits. Vanilla is usually sold as an extract in alcohol.