For many people, roasting chestnuts and snacking on fresh nuts is a Christmas tradition.  Besides humans, the only other animals that can effectively crack the shells of nuts are those with strong, chisel-like teeth, namely rodents.  Rodents, like squirrels, harvest nuts in the fall and store them for the cold winter months just like we do.  Nuts are a good source of protein and contain many vitamins, minerals and healthy fats.  Sadly many people in North America have developed life-threatening allergies to nuts. Not all nuts are alike; some nuts, like hazelnuts, are fruits with thick outer shells.  Other nuts, like almonds and walnuts form a hard pit in the centre of a fruit called a drupe, like a peach or a cherry.

Almond (Prunus dulcis)
Almond is a small tree related to plums, peaches and apricots.  The fleshy coats of almond fruits crack open, releasing the nut inside.  Sweet almonds are edible while bitter almonds, which contain toxic prussic acid, are used to obtain almond oil.  Originally from Asia and North Africa, almond has been planted in semi-tropical areas all over the world.  Almonds need to be insect pollinated; nearly half of all honey beehives in the U.S.A. are located in almond plantations.  Almonds are used in many traditional Christmas desserts including Scottish Dundee cake, Greek Kourabiethes and French Galette des Rois.  Almond paste is placed in the middle of the traditional Dutch and German fruit breads Kerststol and Stollen. 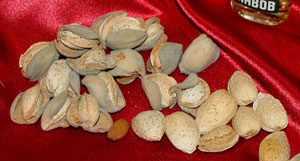 Almonds are encased in a rough husk.

Brazil Nut (Bertholletia excelsa)
Brazil nuts grow in clusters of 12-24 inside coconut-like capsules.  Native to South America, Brazil nuts are popular snacks in Europe and North America.  Brazil nuts are not commercially grown outside South America as they perform poorly in monocultures, relying on wild bees for pollination.  One of the only animals that can eat Brazil nuts is the Agouti, a large rodent.  Agoutis use their sharp incisors to open the hard capsule and shell.  Since Agoutis hide nuts they don’t eat, they disperse them into new habitats.  Brazil nuts are commonly added to Latin American fruitcakes. 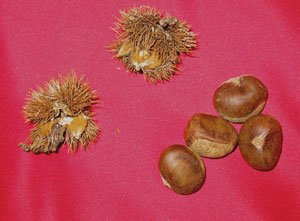 Chestnuts grow inside a prickly husk.

Hazelnut/Filbert (Corylus spp.)
The species of hazelnut we purchase in the store (Corylus avellana) is native to Asia minor and Europe but there are two edible Canadian species: beaked hazelnut (C. cornuta) and American hazelnut (C. americana).  Hazelnuts are a wind-pollinated deciduous shrubs or small trees.  The nuts are encased in a greenish coloured husk.  Hazelnuts were traditionally roasted and eaten by the aboriginal peoples of North America.  In Europe hazelnuts are often used to make chocolates, chocolate butter spread and cakes like the Italian Panforte and German Lebkuchen. 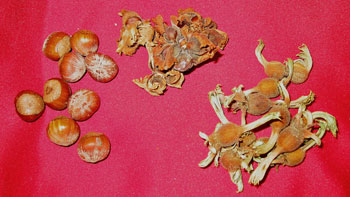 Pecan (Carya illinoensis)
Pecan is a large, wind-pollinated deciduous tree native to North America that can reach heights of 170 ft.  The nut is encased in a leathery green husk that cracks open when ripe.  A single tree can yield over 400 lbs of pecans each year.  Pecans were harvested extensively by aboriginal peoples.  European settlers quickly embraced the pecan, eating them plain, spiced or in baking.  Pecan pie, often served at American Thanksgiving and Christmas dinners, is a classic example of pioneer “fusion” cooking.  Pecans are often added to Canadian butter tarts as well.

Walnut (Juglans spp.)
There are several edible species of walnuts: English walnut (J. regia) grows in south-eastern Europe and western Asia, while black walnut (J. nigra) and butternut (J. cinerea) grow in the forests of eastern North America.  Walnut trees are valued for their timber as well as their nuts.  The walnut, like the almond, is a drupe; the nut is encased in a fleshy, green husk.  Walnuts are used in such Christmas treats as Spanish Pastel de Navidad and Hungarian nut bread Beigli. 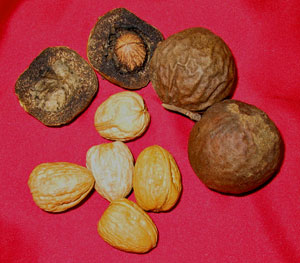 Walnuts occur in the center of a leathery fruit that dries to a brown colour.