The day the birds took over the beach

I was out on Victoria Beach after Labour Day looking for more bugseeds and it was like a scene from an Alfred Hitchcock movie or episode of that documentary “Life After People”. 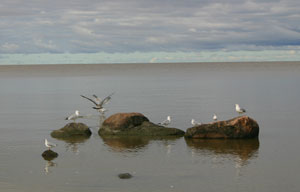 Gulls and shorebirds were the only denizens of Victoria Beach on September 8th.

When I visited Victoria Beach before it was full of families and buff teenagers laying on brightly coloured towels or cavorting happily in the water.  Now the only signs of any human presence at all were the occasional empty pop cans, discarded sandals and cast off fluorescent pool noodles. It was like humanity had vanished off the face of the earth and I was destined to live out my final days as the last member of our species.  The gulls were sitting quietly on the rocks by the shore, masters of all they surveyed.  They looked rather smug, presumably with satisfaction that the human squatters were finally gone, leaving them in peace once more. Or perhaps I was just imagining it.

Later in the week while out at an equally deserted Grand Beach I was puzzled to find an odd animal track in the sand that I had never seen before: tiny little footprints and a pronounced tail mark.  The tracks looked fresh so I figured that if I just did a bit more investigating I’d find the culprit.  I was eventually overjoyed to find a tiny baby snapping turtle, only about 8 cm long from head to tail tip.  He/she was probably only a few weeks old and heading to the lake to find a nice muddy spot to bury him/herself in for the winter.  I’m sure that the journey from the marsh to the lake was easier without hundreds of sunbathers to crawl around or harass it. 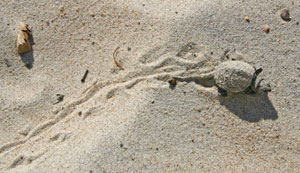 This baby snapping turtle was only 8 cm long.

The absence of people made my task a lot easier as well as I could hike through the dunes without being fearful of barging in on any scantily clad young couples hoping for a few moments of privacy.  I set out early in the morning to hike along shore and see if I could find some bugseeds in the sand dunes.  Fortunately, it didn’t take long.  I had just reached the beach and was bending over to tie my shoe when voila there it was on the eroding bank right next to the stairway.  If only all my field work could be that easy!  Anyway I spent the rest of the day walking along the beach to determine how widespread the species was.  So this trip resulted in the rediscovery of two populations of bugseeds in the area and two new records of bugseeds at Traverse Bay and Grand Beach.  Now it’s back to the laboratory to prepare my plant collection for processing and try to make some sense out of my field notes.

Where I found some American Bugseed.

I’m sure the birds were happy to see me go.