For the last several weeks I’ve been climbing over sand dunes, hiking over hills and sauntering along beaches in pursuit of bugseeds.  What are bugseeds you may wonder? They are a group of annual plants that grow in sandy habitats. Up until fairly recently, they were thought to be weeds introduced to North America from Europe.  Recent research revealed that they are in fact native to the Americas.  After studying herbarium specimens from all over Canada, I realized that some of the species may be rare.  Since most specimens of bugseed were collected 40 to 100 years ago, I decided to try to relocate the old populations to determine if the populations had disappeared or were still present. 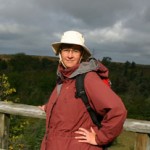 Standing on the lookout platform at Spruce Woods Provincial Park.

My first few days of field work were spent north of Glenboro in Spruce Woods Provincial Park and Canadian Forces Base Shilo. American bugseed was locally common at Shilo due to it’s tolerance and even preference for, areas with some disturbance.  I found it on sandy roads, cutaways into sandy hills, bladed trails, and old sand pits as well as on sand dunes and natural blowouts. Hooker’s bugseed, on the other hand, was found in only one spot in the whole province: firm wind-swept dune blowouts in Spruce Woods Provincial Park. Hairy bugseed was also found on natural dune blowouts in the park and at Shilo. At several sites, particularly along railroads, the bugseeds appear to have been extirpated, their likely habitat taken over by exotic weeds like Russian thistle and Lamb’s quarters. 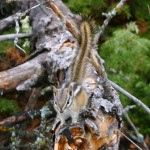 This little guy posed nicely for my camera. 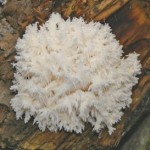 One of the things I love about doing field work is the opportunity to see interesting plants and animals while I’m searching for rare plants.  I saw a tiny little chipmunk on a fallen spruce tree, very kindly posing for the camera for me.  In a little bluff of trees I was thrilled to finally encounter a specimen of Branched Hericium (Hericium ramosum) growing on a rotting log.  I’ve been looking for that species for years.  I was also astounded to find the largest pincushion cactus (Coryphantha vivipara) that I’ve ever seen (about 25 cm high and 60 cm in diameter).  So despite the windy weather that whipped sand in my face and made me feel like I could become airborne, it was an interesting and successful week. 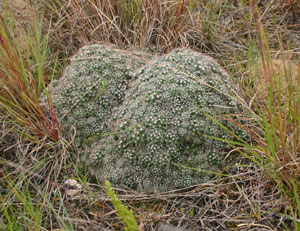 A huge pincushion cactus I saw.