Although I am a botanist by training, over the last six years I developed a real passion for insects.  It all started when I planted a wildflower garden in my back yard.  I would sit on my patio after work, drink iced tea and watch an amazing variety of insects visit my flowers.  When I started working here at the Museum I decided to pursue this interest by studying the pollinating insects in one of Manitoba’s rarest ecosystems, the tall-grass prairie. 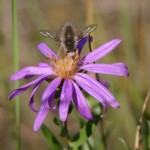 For the last two weeks I’ve been sitting quietly on a stool in various places in Birds Hill Provincial Park to record the visitation sequences of pollinating insects.  My favourite fly (I don’t imagine too many people can say they have one of those) is a little bee fly called Anastoechus. They look like tiny little pussy willows with wings and I think they’re adorable!  They feed on the nectar of Western Silvery Aster and other flowers with their long proboscises, and parasitize grasshoppers by laying their own eggs on grasshopper eggs.  The bee fly larvae then hatch and eat the grasshopper larvae.  Cool!  Gross too! 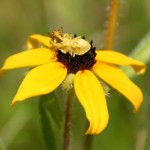 I’m also rather fond of (or more accurately fascinated and repulsed at the same time) by ambush bugs (Phymata spp.).  I remember the first time I saw one.  I was recording the visitation sequence of a bee when all of a sudden it stopped moving.  After a minute went by I moved closer to see what had happened to it.  A strange bug had captured and appeared to be eating it.  I contacted Rob Roughley at the University of Manitoba (sadly, he passed away in 2009), to see if he knew what this insect was.  Being the fount of entomological knowledge that he was, he immediately identified it for me.  Turns out that ambush bugs produce a paralytic poison to subdue their prey very rapidly. Then they inject digestive enzymes into the exoskeleton of the insect to liquefy the goo inside so they can suck it out.  Sometimes they share their meals with each other and sometimes if they’re really hungry, they cannibalize each other.  Cool!  Gross too!

Rob also identified a strange beetle that I had seen on prairie roses.  I was doing field work at Living Prairie Museum when I observed male beetles chewing off all the stamens of rose flowers, which I thought was a bit odd.  Later on I saw beetles mating on the emasculated flowers.  Rob told me it was a “rose-emasculating beetle” (a pretty fitting name), and that the males trimmed the stamens to make a little “love nest” to attract females.  So I guess it’s not just humans that use roses to attract mates. 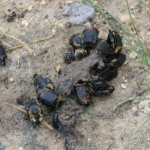 American carrion beetles on, you guessed it, carrion!

Much less attractive scents -from our point of view at least-get other beetle species in the mood for love, namely the smell of rotting meat.  I was hiking along a trail in the park to get to some of my research plots when I saw a congregation of about 20 mating beetles crawling over what looked like part of a carcass.  I hypothesized that they were probably interested in laying eggs in or near the meat.  A bit of research led me to conclude that they were likely American Carrion Beetles (Necrophila americana).  Turns out that if you’re an American Carrion Beetle, carcasses are the equivalent of night clubs; males hang out there and wait for attractive females to show up.  Then when the females arrive, they pounce on them so they can’t meet any other guys!  Pretty clever! 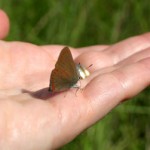 A Coral Hairstreak butterfly lapping up the salty sweat on my hand.

This week I became a willing donor of bodily fluids to one of the local Hairstreak (Satyrium) butterflies.  It landed on my hand while I was monitoring one of my plots and proceeded to lap up my sweat (given the heat this week there was no lack of it), presumably to get the salts. It licked my hand for about 30 minutes and even continued to do so while I walked to my car.  I’ve also, in times past, donated salt to the local sweat bees.  For this reason I usually pause before slapping something on my limbs lest I accidentally squish a friendly butterfly or bee instead of a mosquito (I’m not too keen on donating blood since I get horrible itchy welts).

The more I learn about insects through my observations of them, the more fascinated I become.  Hopefully some of my fascination has now rubbed off on you.  Now get off your computer and go look at some bugs! 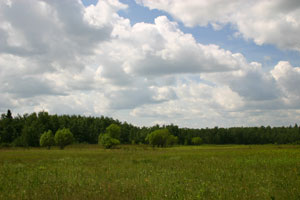