“All I know is that I know nothing”

I didn’t really understand this quote by Socrates until I started working on my Master’s degree.  I soon discovered that no matter how much I learned, there was always much more TO learn.  Although it is fair to say that scientists find answers, it is just as accurate to say that we discover questions.

Research sounds pretty simple.  You start by asking an interesting question about how the world works, and then formulate an idea regarding what the answer will be based on your knowledge of the subject and a literature review (a hypothesis in scientific speak).  If you’ve designed your study well, you should soon have an answer to your question.  However, the answer you get usually creates additional questions that you hadn’t even thought to ask. Questions that need to be answered before you can publish your research, and send you to “back to the ol’ drawing board” to write yet another grant proposal.  Science is kind of like cutting off the head of the mythical hydra: more heads (questions) keep popping up to replace the ones you’ve already dealt with.  Ultimately this isn’t a bad thing as it ensures that good science gets done, but sometimes it can make you feel like you’re running on an unstoppable treadmill.

A good example of this is my recent research on Western Silvery Aster.  This nationally rare plant can be found in nearby Birds Hill Provincial Park.  I discovered that very little was known about its pollination ecology, my personal area of research interest, so I embarked on a plan to identify its pollinators in the hopes of providing useful information to help government scientists prepare their recovery plan. 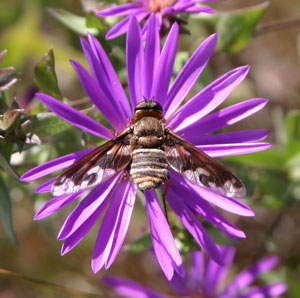 While conducting the pollination study, I observed that flower production was higher in some areas of the park than others.  I began to wonder whether this difference was due to heavier competition with other species for soil resources such as nitrogen.  The following year I attempted to answer this question by establishing some study-plots to determine the impact of fertilization on flower production.  Although there was a slight increase in flower production in fertilized plots, the impact was not as high as I thought it would be, which suggests that there is some other limiting factor at work, perhaps water or phosphorus.  I have yet to design a study to answer that question because I also wanted to know if other plants facilitate pollination of Western Silvery Aster by providing nectar to its pollinators earlier in the year.  Next week I will begin conducting these pollination surveys so if you’re out in Birds Hill Park and see someone sitting on a stool in the middle of the prairie with a white hat and butterfly net-that’s me!

One of things that can greatly affect the interpretation of data is the weather.  One manuscript of mine was rejected because the reviewers deemed that only one year of data was insufficient to make any generalizations about pollinator communities.  Collecting another year’s worth of data allowed me to demonstrate that insect and plant communities can vary substantially in terms of their abundance from year to year due to differences in the weather.  I was fortunate to be able to compare a relatively cool summer (2004) to one that was more typical (2005).  In general, it seems to take at least two field seasons (and ideally more) to detect meaningful patterns in nature due to variability in the weather.  I’ve learned that a scientist has to build flexibility and redundancy into his/her research plans to obtain at least some good data and take advantage of serendipitous observations.

Despite the problems I’ve encountered, my efforts have met with success.  The results of my pollination research on Western Silvery Aster, “A comparison of flower-visiting insects to rare Symphyotrichum sericeum and common Solidago nemoralis (Asteraceae)” were published in the scientific journal Botany.  A second article, “Reproductive ecology of the western silvery aster Symphyotrichum sericeum in Canada”, was recently published in the open access journal Endangered Species Research (http://www.int-res.com/articles/esr2010/12/n012p049.pdf).  You can also check out my earlier paper, “The structure of the flower-insect visitor system in tall-grass prairie”,  in the journal Botany.