Wandering in the Whiteshell

Ah it’s a beautiful day here in Whiteshell Provincial Park.  It’s warm and sunny; perfect weather for lying on the beach. Unfortunately that’s not what I did today because I am not here on vacation: I am working. After a quick breakfast I was on a hiking trail near Falcon Lake, where no botanist (at least to my knowledge) has gone before. What was I doing? After putting on my nearly impenetrable mosquito-proof clothing and gloves, and my backpack full of gear, I set out to collect spring fungi, lichens, mosses and plants (mostly sedges and ferns) that had not been collected in the area before. If you’re wondering why I’m doing this, go back and read my blog “41 Uses for a Dead Plant.” 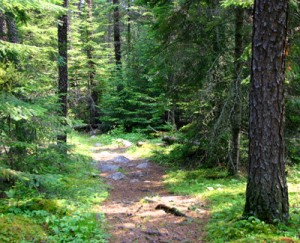 Hiking trail in the Whiteshell.

Even though the trail I was on was only 5 km long, it took me 3.5 hours to reach the end. Botanists spend a lot of time staring intently at the forest floor and periodically crawling around on it to find tiny little plants and lichens. I spent half an hour in one little patch of birch and fir collecting a bewildering diversity of Cladonia lichens. The only problem with pausing for so long is that all the mosquitoes, horseflies and black flies find you. The hike back was not so buggy as I stopped only occasionally to collect a few plants that I missed.

At one point I stopped to collect some mushrooms from an old log. Breathing deeply, I was enchanted by the scent: the rich smell of decaying wood combined with the resinous scent of fir needles and the crispness of moss. It smelled like life. I wondered briefly how many species of insects, fungi and bacteria were in a single handful of this humus? Probably millions. Urban soils, poisoned and stripped of all their diversity, just don’t have the same odor. I’m not sure why people insist on ripping out the native vegetation at their cabins and replacing them with lawn; it just doesn’t smell as good.

At the end of my hike, I was sweating profusely (it was very humid), hungry, thirsty and experiencing “the willies” from being surrounded by the various insects that were intoxicated by the large quantities of carbon dioxide I was exhaling (I’m not in peak hiking condition yet). Once I got to my car, I headed back to the cabin for a late lunch and a much needed shower. After lunch I hiked along the shore of the lake to collect some aquatics. The remainder of the day was spend carefully pressing and labeling my specimens, making spore prints, putting mushrooms in the dehydrator and recording field notes. Tomorrow I get to do this all over again. 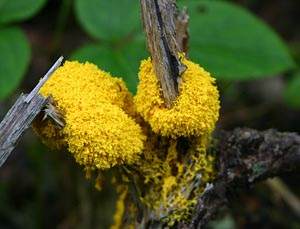 Given the choice between being out here and being in my office at the computer, I would much rather be out here. I’ve seen several deer, leopard frogs, a great blue heron, butterflies, lots of birds and a really cool bright yellow slime mold! At night the local pair of loons serenades me to sleep.