Next week I will be going out to Whiteshell Provincial Park to do some collecting. Why you might ask? I’m trying to fill in Manitoba’s botanical black holes.

The distribution of fungi like this false morel are poorly known.

While looking through several recent botanical publications I noticed an odd pattern. The Canadian distribution for quite a few species was listed as being: British Columbia, Alberta, Saskatchewan, Ontario, Quebec and Newfoundland but not Manitoba. Since the species’ were found on “rock outcrops in the boreal forest” or “acidic bogs”, a lack of appropriate habitat was probably not the reason why they had not been found here. The answer, quite simply, is that no one has ever collected samples of those species in Manitoba before, even though they are probably quite common. In total, there are at least 74 species of lichens and 85 species of moss that likely occur here, but are undocumented, representing a black hole in our knowledge of the provinces’ biodiversity. If we, as a society, are to protect our nation’s biodiversity we need to know what exists here. Although we know which birds, mammals, fish, amphibians and reptiles are native to Manitoba, our understanding of the invertebrate, fungal and botanical diversity is still very incomplete. 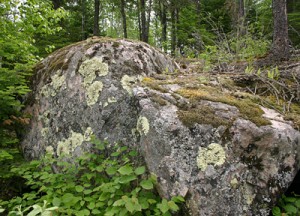 Rock outcrops are covered with a diverse assemblage of lichens and mosses.

For anyone out there worried that I “kill” plants when I collect them, you can stop worrying. I only collect a single branch with a few flowers and/or fruits, leaving the root system intact and the plant still very much alive. Since the bulk of fungi consist of subterranean “roots” called hyphae, collecting a few mushrooms does not kill the fungi. I do much less damage to wild plants when I collect them than the various wild herbivores do when they eat and trample them. Further, I do not collect any species that are protected under federal or provincial legislation, or that are rare and present in small numbers. 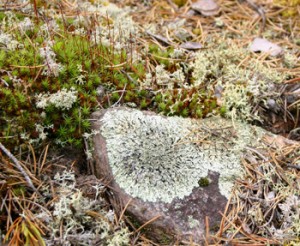 Lichens and mosses are undercollected in Manitoba.

One of my latest endeavours is to try and complete The Manitoba Museum’s botanical collection by obtaining at least one specimen of every species found in the province. In 2008 it was estimated that the Museum possessed slightly less than 83% of all vascular plants, 45% of all lichens, 21% of all bryophytes, 4% of all fungi and less than 1% of all algae. Further, the Museum possesses fewer than five specimens of 45% of our vascular plant species and of most non-vascular plants and fungi. This means that we simply don’t know how widely distributed our native species are or whether their distribution has changed over the years. 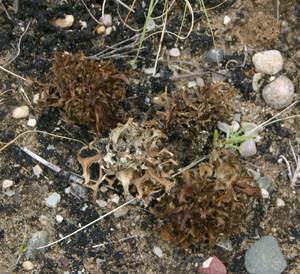 Lichens and blue-green algae are early colonizers of bare soil and rock.

The fact of the matter is that this project will likely never be completed during my stint as Curator here. Documenting biodiversity simply isn’t “sexy” enough to attract the large amounts funds that are needed to do the job properly. I would need to spend several months every year hiking around in the bush with a team of field assistants to achieve this goal. Then I would need staff to properly preserve and catalogue the specimens, and additional collection space to store them in. This year I can only spend 13 days in total to do my field collecting. Given the lack of funding to document the provinces’ biodiversity, the most I can expect to do is make the hole a little bit smaller.