Attending conferences can provide scientists with wonderful opportunities to network, develop new insights into natural phenomenon, refine research, and initiate new partnerships. As a Museum professional I also get to visit Museums and develop ideas for new exhibits and programs at my own institution. On the lighter side, scientists also share a few drinks, commiserate with each other (I had my funding cut too!), meet old friends, exchange field stories and sometimes even get funky on the dance floor after the conference banquet. 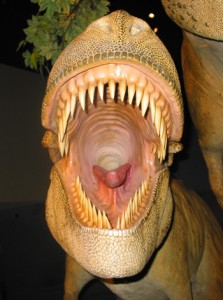 I was inspired by the new exhibits at the Canadian Museum of Nature.

One of amusing things that goes on at conferences is scientific hero worship. Many a young graduate student has fantasized about meeting a famous scientist, dazzling them with their impressive knowledge of natural history, and then forming a fruitful lifelong research partnership (I’d love to spend three years in the jungles of Borneo collecting plants with you and discovering a cure for cancer). In reality, I suspect that this rarely happens. There’s something about meeting a distinguished scientist that makes young scientists go completely blank.
I got to meet the late Stan Rowe (the Canadian ecologist who wrote “Home Place”) when I was a twenty-something graduate student. Instead of saying something impressive, I smiled and stared at him blankly like I was an imbecile for a few seconds before eventually remembering to ask him to sign my copy of his book. It reminded me of that scene in “A Christmas Story” when Ralphie finally meets Santa but can’t remember that he wants a Red Rider BB Gun for Christmas. 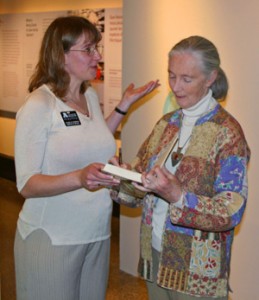 I was reasonably coherent when I met Jane Goodall (she signed my book!).

A colleague of mine recounted a similar tale of how he met the late Stephan J. Gould, one of the most famous palaeontologists in the world. He was visiting the field museum over the lunch hour of a conference but didn’t realize they were serving food, instead choosing to drink three bottles of free beer on an empty stomach. It was in this slightly inebriated state he ran in Stephan. Instead of the witty banter that he would have liked to have engaged in with the world’s most preeminent palaeontologist, he muttered something nearly unintelligible and completely forgettable. Ah such is life! 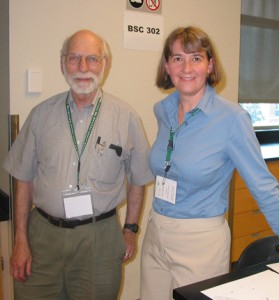 As you get older you clam up a lot less, probably because you actually have some original research of your own to discuss with other scientists. I had a wonderful time chatting with Jane Goodall when she came to the Museum in 2005 for the Chimpanzee exhibit that we hosted. At the Canadian Botanical Association conference this year I was able to meet Irvine Brodo, the Canadian lichenologist that I have admired ever since reading his book on lichens of North America. Who knows? Perhaps one day I’ll know what it’s like to be on the receiving end of the clumsy yet heartfelt admiration that young scientists have for their older colleagues.