Last week I attended the Canadian Botanical Association/Society for the Preservation of Natural History Collections joint conference in our nation’s capitol. I was able to meet Curators and Collection Managers from Museums all over the world, as well as attend a tour of the collections facilities at the Agriculture Canada Central Experimental Farm and the Canadian Museum of Nature. 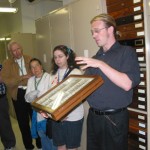 Some of the insect specimens at the Experimental Farm have to be stored in the hallway.

Just about every person I talked to told me about how they are storing specimens in their hallways due to lack of space, losing knowledgeable Curators and collections staff at their institutions (sometimes only half their original staff is left), and scrounging for funding to digitize their collections and facilitate biodiversity research around the world. 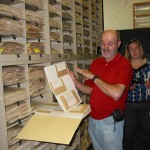 The fungal collection at the National Mycological Herbarium has not been digitized.

It is ironic that at the period in time when biodiversity is in the most crisis, humanity is cutting the funding of the very people and institutions who know the most about it, and possess the knowledge to conserve it. Or perhaps it is not ironic at all, since we are living at a time when we are more interested in technological innovations than in the species we share our planet with. Most people can identify fewer than 10 native plants but more than 100 corporate logos. Biodiversity is valued less and less as we retreat into our digital worlds, oblivious to and seemingly unaffected by the loss of wild species. This is an extremely dangerous disconnect. After all, iPods don’t make oxygen for us to breathe-plants and protists do. Cell phones don’t cure cancer but plants can. HD-TV’s don’t pollinate the food you eat-animals, mostly insects, do. 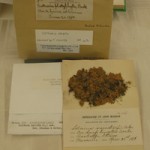 This lichen at the Canadian Museum of Nature was collected in 1898 and can help us monitor air quality.

I don’t have a problem with technology per se; I use the internet and e-mail daily, and I record field data using a PDA and a GPS. But lots of people can’t seem to stop using technology (e.g. cell phones) and become blind to everything else around them (e.g. innocent pedestrians). I once heard about a woman who fell into an open manhole because she was too busy sending a text message to actually pay attention to where she was going!
Oscar Wilde once said that “we know the price of everything but the value of nothing.” The fact that so little money is spent on even the most basic biodiversity work (we don’t even know the number of species on the earth within an order of magnitude) suggests that we as a society do not value it at all, even though it is the most valuable thing on earth. Perhaps the ecological and economic catastrophe that BP (and in fact everyone who drives a car) is responsible for in the Gulf of Mexico will help to change our minds about what is truly important: thriving, functioning ecosystems that help to feed and employ millions of people, or cheap oil for our gas-guzzling SUV’s? Subsidies for big corporations or money for scientific research and conservation? The choice is ours to make.