Recipe for a Perfect Field Day

With field season right around the corner I find that I spend a lot of time reminiscing about my past field work, and musing about what makes a perfect field day. I would say that it goes something like this: 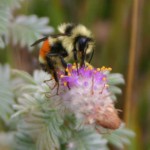 I had a perfect field day once. I was in the Frenchman River Valley of southern Saskatchewan surveying potential routes for a new highway. My plan was to walk the entire length of one route to document the vegetation and identify rare plants. My car didn’t break down or get stuck in mud on the way there. The weather was perfect and the view spectacular. There were thousands of beautiful wildflowers covering the hillsides. Meadowlarks were singing. I found a really cool snakeskin and bird’s nest. There were no mosquitoes. Ah if only every field day was this good.

Sadly most field days are not perfect. Just about anything that can go wrong has gone wrong for me at one time or another. I’ve dropped my portable computer on a rock and lost a morning’s worth of data. I’ve spend an entire day taking pictures only to realize later that I had forgotten to put my card in the camera. I’ve nearly gotten lost. My vehicle has broken down in the middle of nowhere (on several occasions). I’ve locked my keys in the car, miles from a gas station, in an area with no cell phone coverage. I’ve gotten blisters and bug bites and heat exhaustion. I’ve done field work in pouring rain, frosty August mornings (one of Mother Nature’s cruel jokes) and blistering heat. 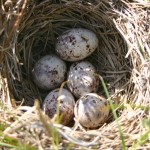 It's always thrilling to find a bird's nest hidden in the prairie grasses.

Every field scientist that I’ve met likes to tell these sorts of “field stories”. It’s almost like a competition where each person tries to outdo the other in terms of the degree of discomfort experienced. One of my favourites was when a friend of mine was rescuing an injured hawk and the bird sunk its talons straight through his hand (and no, he wasn’t exaggerating-I saw the holes). Another is when a gale-force wind blew my husbands’ tent and nearly all his belongings right into Lake Winnipeg. He stood on shore and watched it float away. About a month later I got a call from the RCMP, asking if I knew where my husband was because they found his tent washed up on shore and thought he might have drowned. He was fine but had to spend an uncomfortable night in an old fishing cabin waiting for a plane to pick him up. 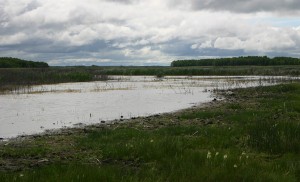 Like many field scientists I’ve had numerous uncomfortable days but fortunately no real tragic ones. Tragedies do happen on occasion so it is important to be as prepared for disaster as you can be. I’ve known at least three biologists who died in helicopter or plane crashes. Another friend was nearly killed by a black bear. Yet another consumed food that was likely contaminated with mycotoxins while working abroad and eventually died of liver cancer. 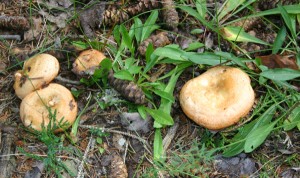 I got eaten alive by mosquitoes while collecting fungus in late September in 2009.

So by now you might be thinking I’m a bit crazy and that maybe a nice desk job would have been a better career choice. Despite all of the discomforts that I have to put up with I would never have chosen another career. The thrill of exploring the wild areas of our planet, discovering new things and being able to see animals up close and personal rather than through the lens of a camera is amazing. I’ve never been more at peace than I have been sitting on a grassy hillside over a valley or swimming in a remote lake. Even the most miserable day has a few perfect moments in it: seeing morning dew on a spider web, watching the sun shine through the clouds, looking into the eyes of another animal being (as Jane Goodall would call them).

I had a wonderful time looking for rare plants in the Great Sand Hills of Saskatchewan.

Furthermore I find that experiencing some adversity makes you more appreciative of the good things in life. I’ll never forget the time I had to hike for 40 minutes through wind and pouring rain to harvest seeds in Grasslands National Park, Saskatchewan. I was cold, wet and my back and knees were aching from hunching over research plots all day. I was never more appreciative of the simple luxuries of life than I was that night: a bath, dry clothes, hot tea, a warm meal and a soft bed to sleep in. Most people (at least in what we call the “developed world”) would not consider these things to be luxuries, but I do. For this reason, experiencing hardship, even a little bit, can make you a more compassionate, less materialistic, and ultimately happier person. I spend my days being grateful for what I have, rather than obsessing about what I don’t. So I don’t begrudge the bad field days. At the very least they make good story to tell.