When I started working here at the Museum I used to spend part of my lunch break peeking into cabinets in the natural history collections room. I was amazed at the variety of organisms we have here: trays upon trays of tropical butterflies, huge beetles, giant fungi, exquisite fossils of long-extinct plants and sea creatures. One day I even came across a stuffed duck-billed platypus; an Australian mammal that I’ve been fascinated with since I read about its’ bizarre physiology (they lay eggs yet nurse their babies) in a textbook long ago. When I heard that 2010 was going to be the International Year of Biodiversity, and that we needed a new exhibit in the Museum’s Discovery Room, I thought that it would be a wonderful opportunity to show some of these amazing organisms to people who are not so lucky in their employment opportunities as I am. I’ve been working on this exhibit with the other Natural History Curators, Dr. Randy Mooi and Dr. Graham Young, for the last six months or so and am pleased that it is now open to the public. 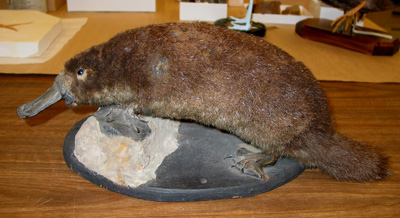 Biodiversity is simply the variation of all life forms on earth. Scientists have documented nearly 1.9 million different species, and estimate that there could be more than 50 million that are still unknown to science. Over 1200 new species of flies alone are described every year. Helping to document new species and preserving specimens that scientific descriptions are based on, is one of the main purposes of museums. Museum specimens are used by scientists to study all sorts of things: climate change, disease transmission and the status of endangered species to name a few. We also care for many specimens that were donated by amateur naturalists and collectors, the source of most of our exotic specimens. 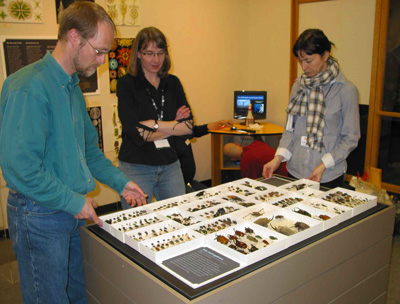 Amazingly, one fifth of all known species are beetles. To illustrate this point, we prepared a display case that contains just beetles, mostly exotic ones, including several huge Rhinoceros beetles. Another goal of this exhibit was to display as wide a variety of organisms as possible, so in addition to the spectacular giant clam and golden pheasant, we included some unusual species that we don’t normally exhibit, like parasites and blue-green algae. To remind people that the biodiversity that exists today evolved from earlier life forms, we’re displaying some fossil specimens, mainly aquatic invertebrates and plants. Several newly acquired specimens-including a very yummy smelling chicken-of-the-woods fungus that nearly ended up on my dinner plate-are displayed as well. 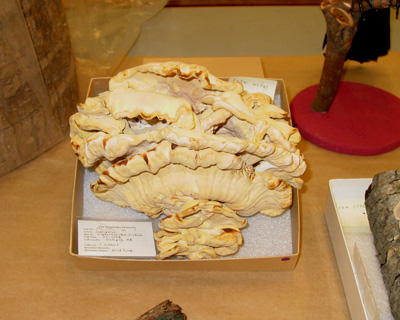 Carol and Bob Hibbert donated this beautiful chicken-of-the-woods fungus to the Museum.

The more I study and observe nature, the more fascinating I find it. I think Charles Darwin expressed this sentiment most elegantly in the last sentence of On the Origin of Species: “…from so simple a beginning, endless forms most beautiful and most wonderful have been, and are being evolved.” I invite you to come to the Museum this summer to appreciate the beauty of nature and marvel at those endless forms in our new exhibit Natural Wonders: A Celebration of Biodiversity. And yes, my beloved duck-billed platypus is there for you to see. 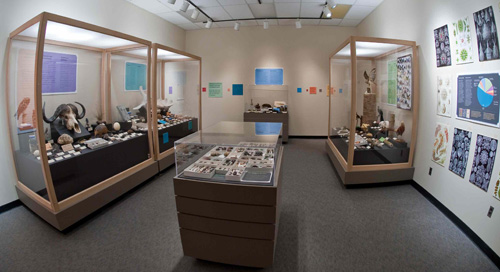 The completed Natural Wonders exhibit in the Museum's Discovery Room.