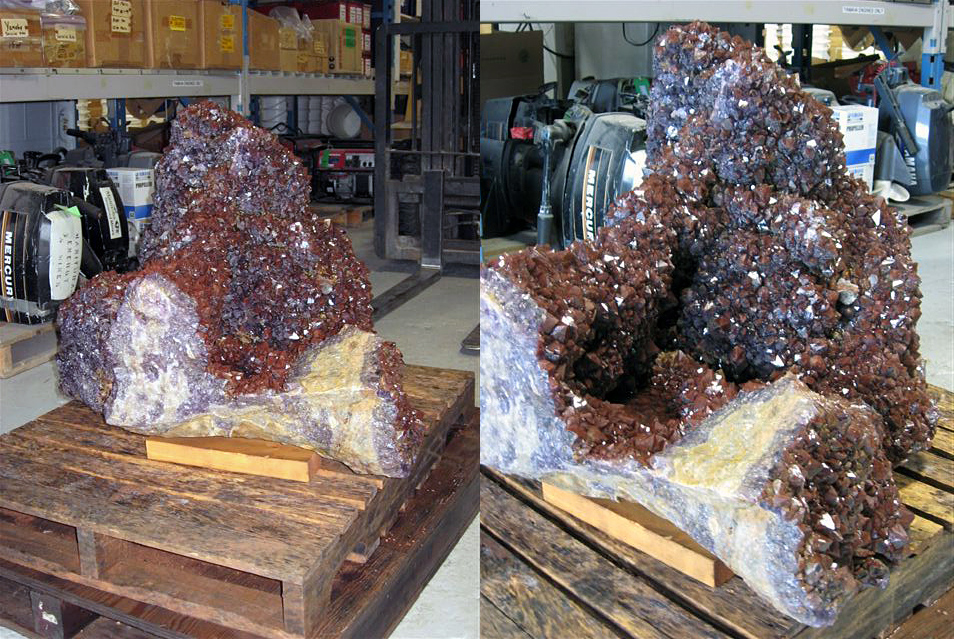 This spectacular crystal cluster was collected in September, 2009, from the Blue Point Amethyst Mine, by Lyndon Swanson, Greg Hasler, and others. It is the largest specimen Mr. Swanson has seen in ten years owning this mine! (photos: Gerry Benger, Manitoba Geological Survey)

For the past several years, I have been working with the Mineral Society of Manitoba to develop a mineral exhibit at the Museum. This partnership has been a wonderfully positive one; among other achievements the Society has donated to us a gorgeous selenite (gypsum) cluster from the Winnipeg Floodway, which I hope to show you on this page at some point.

So it was not a total surprise when in the fall of 2009, I received a call from my geologist colleague John Biczok (who is also president of the Mineral Society), telling me that they had found another superb specimen for us.  The gist of his call was that,

“We have the biggest amethyst cluster I have ever seen, and it is in the back of a truck. Greg Hasler has just pulled it out of the Thunder Bay amethyst mines and it has mud all over it. Where can we deliver it at the Museum, so that we can clean it up?” 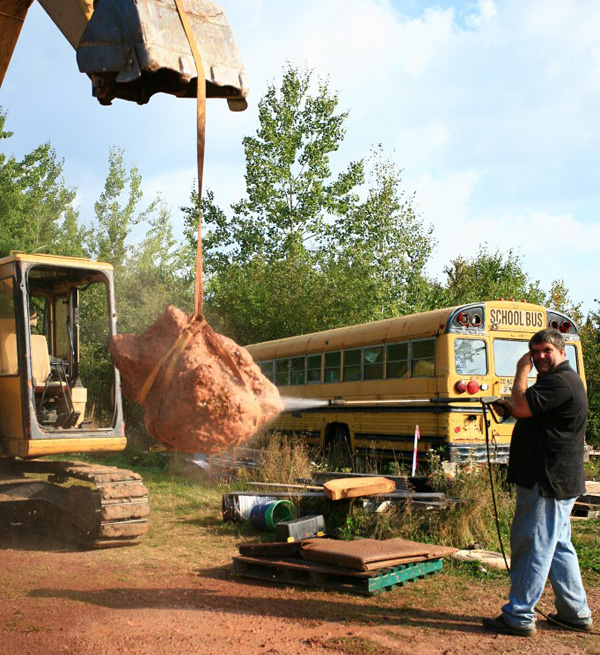 The amethyst was pressure washed at the mine, after extraction from the ground. The Thunder Bay area is home to the most productive amethyst mines in North America. (photo: Cindy Hasler)

Further discussion revealed that this was a piece that covered an entire shipping pallet, and might weigh something toward half a tonne! Now you have to appreciate that, at the Museum, we don’t have immense space available to lay things out, let alone places where we can readily pressure wash the mud from a half-tonne boulder. This specimen was arriving in Winnipeg, and it needed to be taken off the truck and put somewhere secure. Of course it was not only huge, but it was potentially beautiful and we didn’t want to see it damaged. 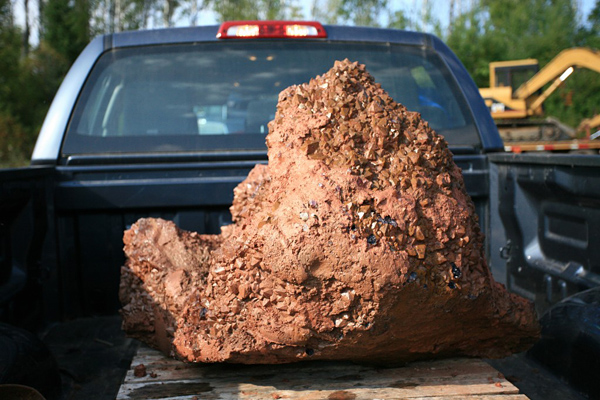 The amethyst rests in the back of Greg Hasler's truck, awaiting transport to Winnipeg. (photo: Cindy Hasler)

I was at a loss for a few minutes, wondering (for instance) if my family would mind having a giant muddy boulder temporarily stored in our garage. I surmised that they might. But then I thought of my friends at the Manitoba Geological Survey, with whom we have collaborated on several projects. A couple of calls later, and we had permission to have the amethyst delivered to the Survey’s core facility in the western part of the city. Not only would the Survey let the Mineral Society unload and wash the specimen in their yard, but they would then use their forklift to move the cleaned amethyst to a safe place inside the building.

And there it sat for the winter, occasionally visited by people from the Mineral Society and Museum, and admired and photographed by Survey staff and visiting geologists. It was truly a wonderful, spectacular piece. The Museum partnered with the Mineral Society to purchase the amethyst for our collections, with a view to putting it on exhibit in the Earth History Gallery. In the early summer last year Janis Klapecki and I carefully bundled the beautiful crystals in layer upon layer of foam padding, and it was shipped over to the Museum back rooms, where it has sat for almost another year.

Now, finally, we will have our first opportunity to share it with visitors, through a temporary exhibit in the New Acquisitions Case in the Museum foyer. This will open to the public on May 10th; I am really looking forward to their reaction!