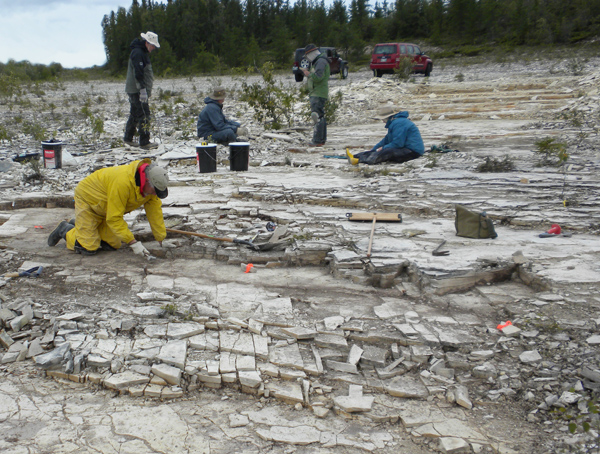 Last week, I discovered several very exciting fossils. Some of these are unusual, so unusual that they will certainly end up as the subject of future scientific publications. One of them is only the second known specimen, worldwide, of a particular group for the entire Ordovician Period!

But how, you must wonder, did I manage to make these discoveries? Was I out in the -20 degree weather, scraping the snow from the edge of a quarry in the Manitoba Interlake so that I could get at the rock beneath? Was I taking time away from the Museum, collecting fossils beside some calm tropical sea?

No, it was not as romantic as either of those possibilities. I was in one of the best places to find unusual fossils: looking through the microscope in my little research office. You may have heard of those situations when a large museum discovers an unknown dinosaur in its back rooms, stored away in field jackets from some long-past collecting expedition. But what you might not appreciate is that many of the most important fossil discoveries are made in museum collections, not in the field. 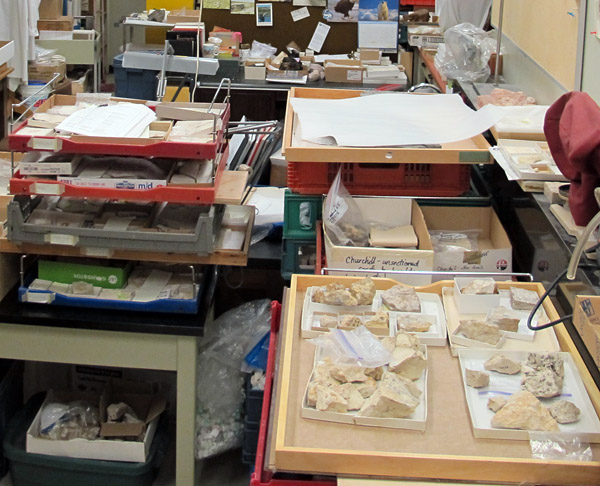 In the paleontology lab, trays of fossils await examination under the microscope.

I had thought about this for a long time, ever since hearing and reading about how Euan Clarkson discovered the conodont animal in a collection in Scotland. Conodonts have been known for over a century as small, fossilized tooth-like structures that are abundant in many rocks from the Paleozoic Era, but until the early 1980s it was not known what they really represented. Euan found the answer when he was looking through drawers full of specimens that had been collected long before from a site near Edinburgh known as the Granton Shrimp Bed. Based on this discovery, he and his colleagues were able to demonstrate that conodonts were eel-shaped fish-like creatures.

It is much the same here. We might sometimes already have an inkling that we have found something unusual, such as a very ancient horseshoe crab. But it is only when we really study things carefully under a microscope that we are able to make sense of them, to discover what they actually are. And there are times that the finds are, like Euan’s, simply serendipitous. When I first started to work at the Museum, I had to sort through some uncatalogued fossils. One of these looked somewhat like a jellyfish, with the note attached stating that it had been found in a schoolyard in River Heights, Winnipeg. 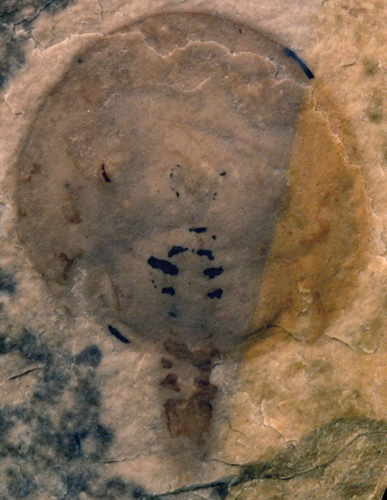 Years later, when I really started to study fossil jellyfish, I pulled out that specimen and realized that it wasn’t just a jellyfish. It was actually one of the best-preserved fossil jellies in existence, and I used a photo of it in a paper we wrote reviewing these sorts of fossils. Since it was found in a schoolyard, however, we don’t actually know its bedrock source. I have my hunches about where it came from originally, but we are still hunting for that jellyfish goldmine! So maybe I will make a discovery in the field, too, but if so it will be because we first found a fossil in the Museum’s collection.

Meanwhile, on these winter days, I will be hunched over my microscope whenever time permits. There are so many slabs of rock to be pored over, fossils waiting to be discovered, and time moves on faster and faster … 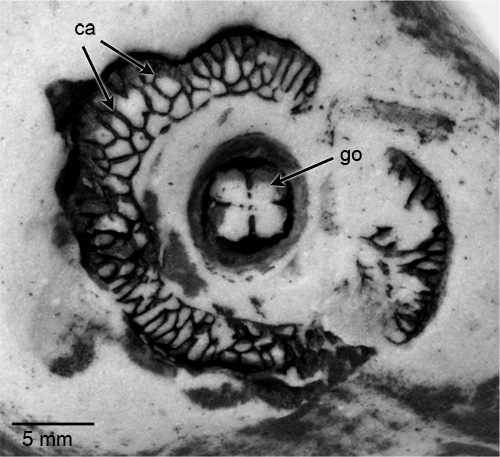 The jellyfish found in a schoolyard in Winnipeg (specimen I-2555; ca=canals, go=gonads)