Beneath the Streets of Wolseley …

The following is modified from a piece I wrote for the Museum’s newsletter Features, with the addition of several images that would not fit into the print version. 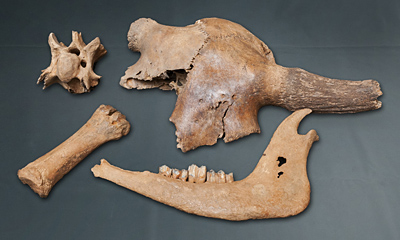 A selection of the bones found at the Ruby Street site (photo: Hans Thater)

Have you ever seen a cartoon that shows the earth cut through vertically, with layer after layer of bones of extinct creatures hidden beneath the city?

Walking through the streets of Winnipeg, I have sometimes imagined the sediment and rock beneath. First the soil, then the old river deposits, beneath them the lakebed clays of Lake Agassiz, and then layer after layer of ancient limestone extending downward toward the Precambrian Shield.

Although we know all of those things are present, we rarely get to see them unless something is brought to the surface by some lucky coincidence. Each of those lucky coincidences can help us to understand the past that is preserved beneath our feet. 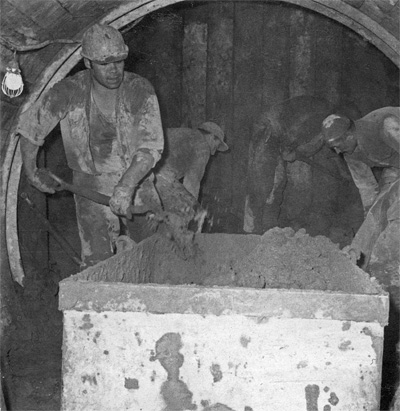 Crew working on the sewer excavation under Ruby Street

In November, 1969, workers were excavating a sewer in the Wolseley area of Winnipeg, near Ruby Street and Palmerston Avenue. At the bottom of a 10.7 metre (35 foot) deep trench, a stiff blue clay was found. Above the clay were sand and gravel containing bison bones, along with clams and pieces of wood.

Tipped off by an anonymous phone call, Dr. George Lammers, the Museum’s first Curator of Geology and Paleontology (and my predecessor in this job), visited the site and collected the fossils. Since then, these unusual pieces have resided in the Museum’s collection, where they have provided much information about Winnipeg’s distant past. 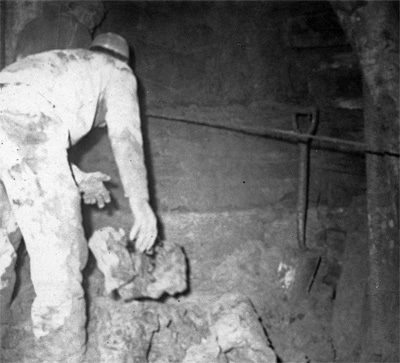 It looks as though sewer excavation was dirty, unpleasant work forty-one years ago (as I'm sure it still is today).

Some of the wood from deep in the trench was radiocarbon dated at about 7,500 years old (7,490 ± 80 years before the present). The bison parts include a portion of a robust skull, probably of the extinct species Bison antiquus occidentalis. This species, which became extinct about 5,000 to 4,000 years ago, had horns that were significantly larger than those of modern bison. We know that the bones came from more than one bison, because they include two left mandibles (jaw bones).

There are other bones that are probably elk, and it is quite likely that all of the skeletal parts belong to animals that had been broken up by decomposition, water flow and scavengers. One of the most interesting associated pieces is a log that had been gnawed by a beaver! 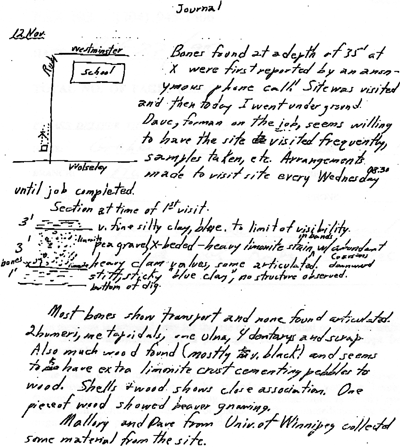 This page of field notes was written by my predecessor as curator, George Lammers, when he first visited the Ruby Street site in November, 1969. If you go looking for this place, please be aware that Erik Nielsen, of the Manitoba Geological Survey, sent me a note in the 1990s suggesting that the actual site was at the corner of Ruby and Palmerston, as the school is on Wolseley, not Westminster.

The age information, together with the sediments and fossils, tells us a lot about prehistoric events in this area. The sand and gravel have features of an ancient river bar, in which the clams lived, and onto which the wood and the bison were deposited. We can imagine a spring flood carrying pieces of wood from oak and larch trees, along with the occasional carcass of an animal that fell into the water upstream.

The clay at the bottom of the trench was probably deposited in Lake Agassiz, the giant lake that covered much of Manitoba as the glaciers melted at the end of the last Ice Age. Lake Agassiz receded from this area by 8,000 years ago, and this site tells us that the ancient Assiniboine River had already cut a  valley within a thousand years after the lake had left the area.

Sometimes we don’t have to travel far to find evidence of long past worlds!

This article from the Winnipeg Free Press of March 14th, 1970, shows how exciting the Ruby Street find was considered at the time!