Specimens for the Cambrian exhibit are laid out on a lab table together with a draft design of exhibit copy (those hands belong to conservator Lisa May).

Last week, in our lab and in the small layout room next door, we were juggling specimens for two Earth History Gallery exhibits. We are developing a timeline that will lead the visitor from the formation of the Earth (4.5 billion years ago) right up to the Ordovician Period of our Ancient Seas exhibit (about 450 million years ago). This timeline will feature quite a number of unusual geological specimens and reconstructions, each of which will be placed in a little case. So there was a group meeting of the people involved: the designer, collections staff, conservators, and me. We contemplated each specimen, as I lifted them in turn to show how they should be oriented and placed. In the course of an hour or so, we contemplated a piece of the oldest rock in the world, a banded iron formed on an early seafloor, some beautiful Cambrian sponges, and many other pieces. I can hardly wait to see these installed in the exhibit, but that is still a couple of months off.  We are continuing to work together on the “look” of the exhibit; more of that in my next post. 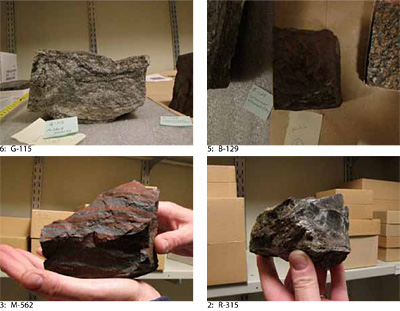 As exhibits are planned, specimens are photographed as they will be oriented on mounts. Then the conservators and technical staff get to work to produce the beautiful permanent supports. These are some of the Precambrian rocks and fossils that will be placed in the timeline exhibit.

Meanwhile, the final specimens for our Ancient Seas exhibit were being “staged,” along with their mounts, prior to being moved downstairs for final installation in the Earth History Gallery. The main part of this exhibit was opened early in the spring, but some of the specimen installation and lighting were delayed until now because mount-making and light installation are very laborious tasks and cannot be rushed. 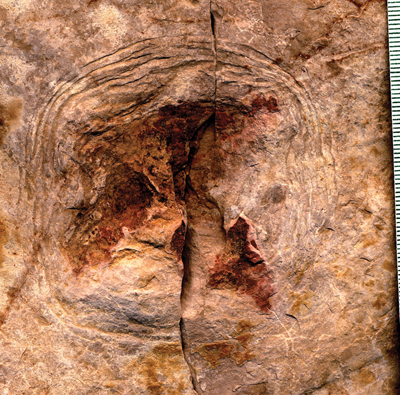 This splendid Ordovician jellyfish from central Manitoba was inserted into a case in the Ancient Seas interpretive rail a couple of days ago.

At the end of last week and start of this week, we placed specimens into special “windows” that had been cut into the boxes of the Ancient Seas info rail, so that the visitors will be able to see at least one fossil for every kind of creature depicted in the video animation. As the job is complicated, we were only able to install a couple of specimens each day. 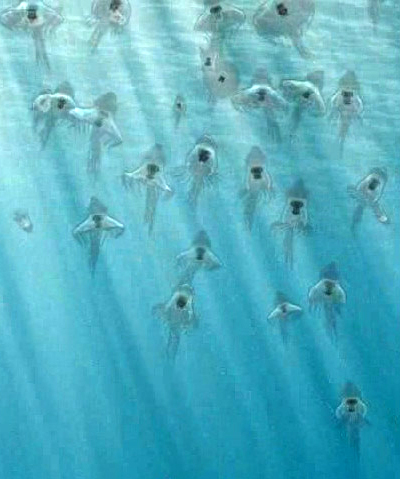 The animated jellyfish in Ancient Seas are based on the fossil jellies from central Manitoba.

Under the guiding eye of designer Stephanie Whitehouse, technical wizards Bert Valentin and Wayne Switek sorted out the complicated fibre optic lighting and mounts, then they worked with conservator Lisa May to place each specimen in exactly the right position. I came in toward the end of each installation to serve as quality control on the placement and lighting (or as chief pain, perhaps), then each case was closed up and ready for the public. The exhibit is now absolutely, finally, 100% complete, and it is gorgeous!

The Ancient Seas exhibit, in a photo from earlier this year. This week, we finished installing the final specimens in cases in the rail in front of the video.