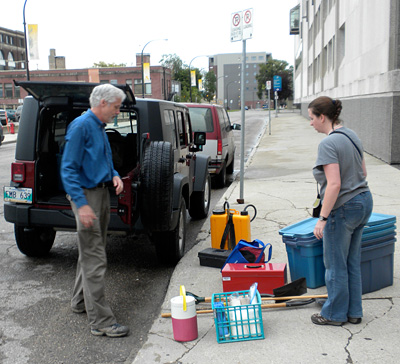 Outside the Museum door, Debbie Thompson (R) and I are contemplating how to fit gear into a Jeep as we prepare for 2010 fieldwork in the Grand Rapids Uplands. (photo © David Rudkin, Royal Ontario Museum)

Last week, in the lab next to my office, we finished sorting and putting away the remainder of the gear from this summer’s field expedition. As you might expect, there were hammers, chisels, and field bags, the basic necessities for collecting fossils from hard limestone bedrock. But in addition to these, we washed multiple pry bars, shovels, geo-tools (mattocks), knee pads, and gloves. We sorted tool boxes, whisk brooms, insect repellent, bug jackets, camera equipment, permanent markers, pencils, tarpaulins, metal tags, wires, nails, coolers, and thermoses, and filed away long-life food items to await our next field season. 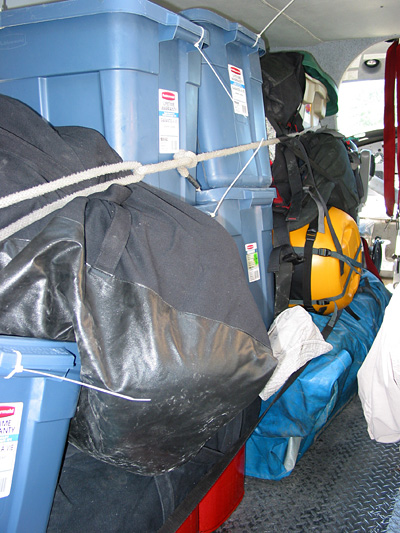 The field gear jams one side of an Otter floatplane, on the way to our camp at McBeth Point, Lake Winnipeg (August, 2006).

I often hear from people outside the “business” that it must be a lot of fun to do paleontological fieldwork.  Of course it is, but many of those people probably don’t realize that a collecting trip carried out any distance from the Museum can be a very complex operation, one that may require almost military planning. When I started this sort of work, I certainly didn’t realize that I would have to become a “master of gear.” Depending on the type of fieldwork, we have had to become familiar with items as disparate as a firefighter’s backpack sprayer, a laser levelling survey device, and a Zodiac boat.

I am always fortunate that other people (Ed Dobrzanski in particular) take on a lot of the hard work of assembling field gear, but as I am often the leader of the field party, it is up to me to ensure that we have the requisite tools, food, and transportation. And woe betide me if I forget some of the more “subtle” essentials such as toilet paper! 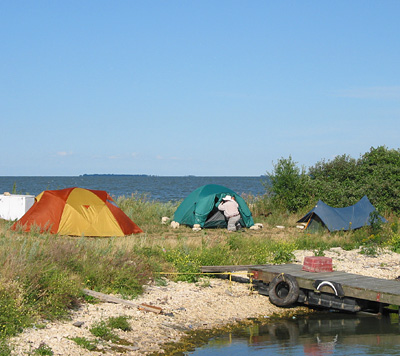 Our tents are set up on the shore at McBeth Point in summer, 2006.

Sometimes we travel around with very strange things in our vehicles. We have had tens of gallons of water sloshing around in the back of a van, or hundreds of pounds of plaster and bales of burlap. As paleontological researchers we don’t have to deal with the very dead animals that our zoologist friends sometimes transport, but our equipment does occasionally raise issues. One of my colleagues was once driving into the US with students, on a fossil collecting expedition, when his vehicle was selected for routine inspection. He had a difficult time explaining why he was travelling with his trunk full of “burglary tools,”  but fortunately, his expressions of innocence finally won over the American border officer. 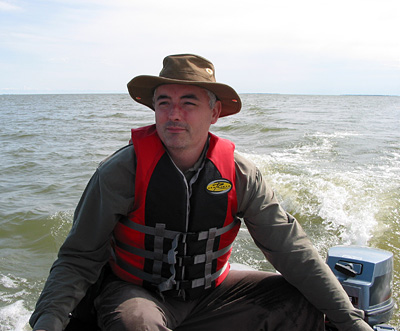 Of course, all of the gear experience can have its practical advantages.  I feel that I have nearly expert knowledge when it comes to selecting cold chisels or hammers.  I know which types of tents are likely to stand up to heavy winds (and, more importantly, which ones aren’t!).  I know how to enter and exit a helicopter or a float plane, and can shoot a cracker pistol to ward off bears. I can assemble a Zodiac boat from a few packages of unlikely looking parts.  Not without bruising and bleeding, occasionally, but at least I am capable of practical and potentially useful tasks that may seem unlikely for someone in an academic discipline. 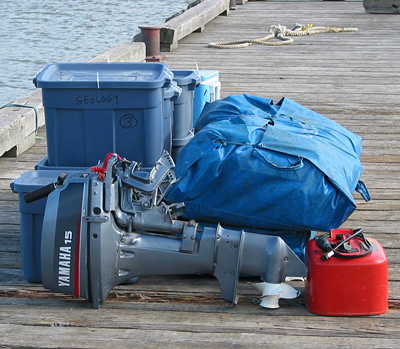 A mound of gear on the dock at McBeth Point awaits the arrival of a turbo Otter (below) for the return trip to civilization. As it turned out, winds prevented the Otter from tying to the dock, and we had to carry the hundreds of kilos of gear all the way around the harbour and load from the float! 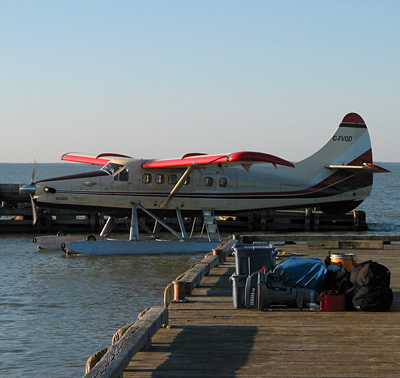