I’m sure you’re all wondering what’s happened to the blog, I promised a Part 2 for the story of Tullauhiu’s leg and I have yet to deliver!

Truthfully, I’ve fallen down the rabbit hole of research.  Although I’ve discovered some interesting tidbits, I want to wait until I’ve uncovered the full story before I present it to you here.

I had some great feedback from Part 1 of this blog post, from a variety of different sources, all of which lead me in different directions.  As someone who loves a good mystery I embraced these leads like any research detective would, and this has only led me further and further down the rabbit hole.  The further I went, the less I felt I could blog about it until I had the facts straight.

This story entwines archaeology, oral history, and the broken trails of early record-keeping.  I think it will be a fascinating tale, and I hope I will find out how we came to acquire this artefact.

In the meantime, I try to maintain my focus on what this prosthetic leg meant for Tullauhiu.  The loss of a limb would be a devastating experience, and within Inuit culture this was felt even deeper.  One of my colleagues mentioned that a person with a severed limb was no longer considered whole.  She sent me a chapter from her MA thesis which discussed this:

“A person with a severed limb or organ is considered of a lesser kind then other human beings. Only an angakkuq, a shaman, could survive a “disarticulation”.  In fact, going through such an experience was part of the shamanic rite of passage. Angakkut stood at the articulation of the terrestrial and cosmological worlds (Saladin d’Anglure 1983, 2006a; Trott 2006).” (Cloutier-Gelinas 2010:62).

Imagine then what the gift of a prosthetic leg would have meant for Tullauhiu!

After consulting with some folks, I decided that while I sort through the details of this mystery I’d leave something for Tullahuhiu to let him know I understand the importance of this artefact.  Although food was suggested, I knew our conservators would not be pleased with me if I left some jerky in the storage areas.  Instead I chose something else that could be of some use, a small iron file. 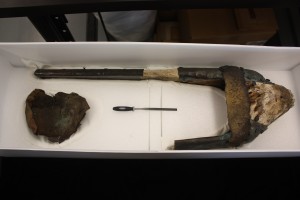