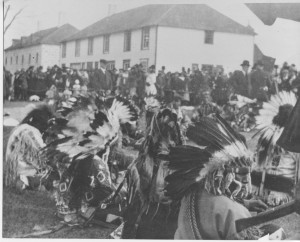 the firm’s 250thanniversary in 1920.  The HBC was keenly aware of its role in the development of Canada since 1670, and commemorated the event with a variety of special events, re-enactments, and pageants across the western and northern regions of the country.  Although the HBC “Historical Exhibit” was not created in time for the 1920 celebrations, the initiative continued, and the Exhibit was opened in the Winnipeg retail store of the HBC in June 1922. 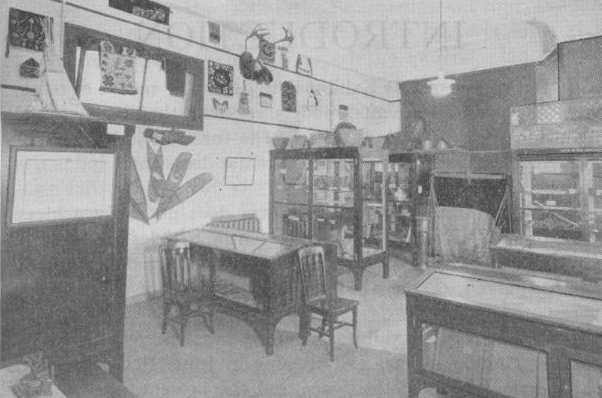 With the cooperation of his employer, the federal Minister of Mines, Harlan I. Smith, an ethnologist at the Victoria Memorial Museum in Ottawa, travelled to Winnipeg in 1921-22 to assist in organizing the Historical Exhibit, selecting objects for display and writing text “to interest visitors.”  The Exhibit’s mandate to depict aboriginal life and culture corresponded well to Smith’s own anthropological work for the federal government. 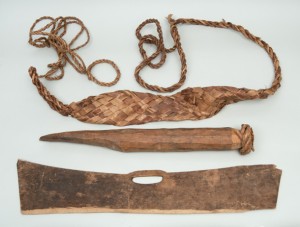 These and the following objects were collected by Harlan I. Smith in Bella Coola. At the top is part of a climbing harness, for harvesting the inner bark of hemlock trees, in the middle is a yew wedge, used for splitting planks, and at the bottom is a bark pounder or hackler used to prepare cedar bark. TMM, HBC 1530, HBC 1531, HBC1508.

In 1920-21, he was engaged in fieldwork among the Nuxalk and Tsilqot’in people in the Bella Coola Valley of British Columbia, focusing on the traditional uses of plant and animal materials.  For his 1922 fieldwork 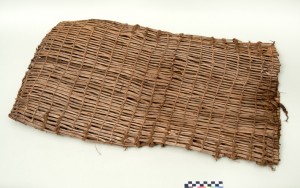 Eulachon strainer, used to extract the grease from eulachon, a smelt-like fish. The eulachon grease was a valuable commodity, used as a condiment for various dried foods, such as the inner bark of the hemlock tree. TMM HBC1512.

season, Smith “kindly offered to secure for the Hudson’s Bay Historical Exhibit typical specimens of Indian work in that District.”  These objects form an interesting assemblage within the HBC collection, reflecting Smith’s interest in traditional Nuxalk culture and society – objects chosen more for their functional than aesthetic value.  This is enhanced by the field notes and visual records Smith obtained at the same time.  A pioneer in using film in ethnology, the objects he 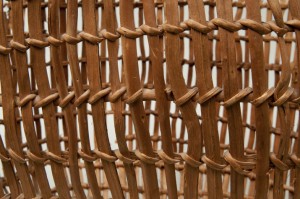 collected for the HBC Museum Collection are complemented by the still and moving images held today in the collections of the Canadian Museum of Civilization in Ottawa.  The clear provenance [information about the origin and ownership of an object] and complementary documentation transforms this small collection, assembled to represent everyday life for the Nuxalk people, into another treasure within the HBC Museum Collection.

Rack made of red cedar used to dry food such as berry cakes and fish, for preservation. TMM HBC 1504.