Feb 29, 2012
I started my position as the Curator of the Hudson’s Bay Company Museum Collection in January, and am familiarizing myself with this fascinating collection, comprised of objects which reflect more than three centuries of HBC operations.  There is not a single organizing principle, other than objects having some association with the HBC or its employees.   The vast majority of the collection was donated by the Hudson’s Bay Company to The Manitoba Museum in 1994.  Of the roughly 25,000 objects in this collection, about 1/3 are of indigenous origin – “curiosities of the country” collected by HBC employees – while about 2/3 are of Euro-North American origin.  The collection contains some remarkable and iconic objects, but an equally important aspect is the ways in which the collection symbolizes and evokes larger themes in corporate, Canadian, and world history.

An example of this is the Halkett boat – a mid-19th century inflatable or collapsible boat intended for the use of travelers and explorers – in the HBC Collection.

A recent request came from Jeremy Ward, Curator of The Canadian Canoe Museum, Peterborough, ON. www.canoemuseum.ca   He was interested in obtaining an image and information on this object for an upcoming exhibit on collapsible and folding watercraft.  The information he provided, and my search into the records at The Manitoba Museum, produced some interesting results.  First, it is one of two known Halkett Boats surviving worldwide.  The other, in the Stromness Museum, in the Orkney Islands of Scotland, was associated with the Arctic explorer and surveyor Dr. John Rae – who was employed by the Hudson’s Bay Company.  www.orkneycommunities.co.uk/STROMNESSMUSEUM/

Rae considered the boats very useful on his Arctic voyages in the 1840s, which included a search for the lost expedition of the famous Arctic explorer Sir John Franklin. 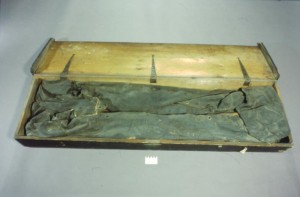 The Halkett boat in the Hudson's Bay Company Museum Collection in its shipping box, labelled "Sir George Simpson," prior to conservation. TMM, HBC 40-95.