A recent web-based discussion about the identification of an odd-coloured bluebird reminded me of a similar odd bluebird in the Museum collections. There are three bluebird species in North America: Eastern, Western, and Mountain. Contrary to what one might expect from their names, Manitoba is home to the Eastern and Mountain Bluebird, the Western being found in Canada only on the other side of the Rockies from us. 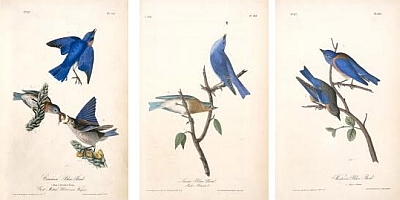 Males and females have different plumages in each species, but at least the males of all three species are quite easy to tell apart when the birds follow the rules and look like the picture in the book (or on the App, as the case may be!) and live where the maps say they must. But, as with so many organisms, variation is the rule, and sometimes things just don’t look quite as they should or show up where they should. That’s why so many people are interested in looking at birds (or insects, or almost any natural organism); they are endlessly varied and can sometimes make unexpected appearances.

What does this have to do with Museum collections? Because of that amazing variation, the specimens held in a museum are very useful for comparison and the museum collections themselves are a good place to deposit unusual specimens that might need a harder look later. Bluebirds are a good case in point. In the late 1960’s, an ardent bluebird worker in Manitoba, John Lane, found a very strange-looking male bird at one of his nest boxes. Its coloration suggested a hybrid between an Eastern and a Mountain Bluebird. Hybrids among bluebirds were not known at this time, and this was rare enough that he got in contact with the Museum and the unusual step was taken to collect the apparent hybrid, its Mountain Bluebird mate, and raise the young in captivity (for more details, see an article by John Lane in The Blue Jay, 1969, pages 18-21). 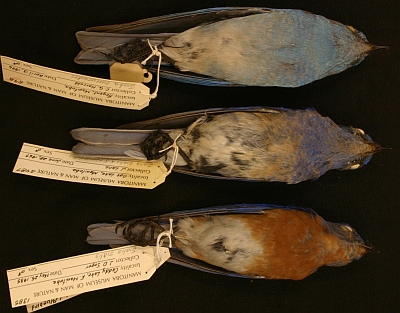 The hybrid male bird is certainly strangely-coloured. It has the quality of blue of an Eastern Bluebird, but rather than the typical rusty-orange throat and breast of this species, these areas are mostly blue, similar to the pattern of a male Mountain Bluebird. There are, however, some dashes of reddish mixed in. A look at the back shows the difference in blue colour of the Mountain Bluebird and the possible hybrid and Eastern birds. 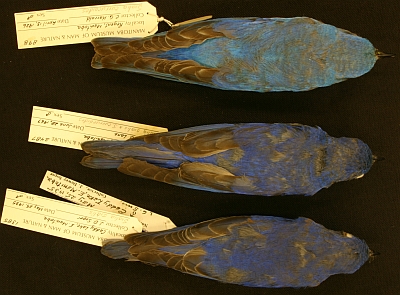 Dorsal (back) view of the same birds as the previous image with Mountain Bluebird above, hybrid middle, and Eastern Bluebird below. Note the quality of the blue is similar between the two lower specimens. Also note that the length of the wings and tail of the possible hybrid are intermediate.

The bluebird species also vary in size, although with overlap. Once the potential hybrid was at the Museum, measurements could be made to see where it might fit. As an example, wing length (measured officially as ‘wing chord’) for male Easterns ranges from 95-105 mm and for male Mountains ranges from 108-121 mm. The hybrid’s wing length, at 104.5 mm is at the high end of Eastern, but nowhere near the Mountain Bluebird size range. This same pattern holds for other measurements.

One possibility not considered by Lane is that the odd-coloured bluebird might be a hybrid of Western and Mountain. Western Bluebirds have a blue throat with an orange breast, and are slightly larger than Eastern Bluebirds, making the measurements fit that species. The blue breast of the hybrid would be the possible Mountain parent contribution. One issue with this is that Western Bluebirds usually have a rusty-orange patch on their shoulder or back, absent on the possible hybrid.

There is one more way that the hybridization question might be resolved with the Museum specimen. Dried skins, like these birds, can provide samples of DNA, the molecules that are the instructions for building and operating living things. Just as human DNA samples can identify a particular person or determine to whom they are related, animal DNA can be used to identify parentage. Perhaps a biologist interested in bluebirds will one day run a sample of DNA and help to solve which species might have hybridized to make our strange specimen.

But without the specimen in a museum collection, we would never have the chance to check.