When a small thing means a lot

As summer comes to a close, I am finally getting an opportunity to go through some of my fieldwork photos. I ran across this one of a culvert that connected a large marsh with a roadside ditch along Highway 6  just south of Tan Lake  (about 30 kilometres north of St. Martin Junction). 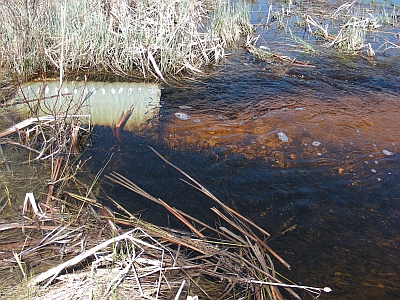 Clouds of brook sticklebacks in a roadside ditch, May 15 2011.

The large dark cloud in the water on either side of the culvert is a school of brook stickleback (Culaea inconstans), a common non-game fish found in ponds, marshes, bogs and streams across most of Manitoba. In spring, these small fishes (to about 60 mm long) move from larger bodies of water to smaller ones where the females lay eggs in nests built and guarded by the males.

So finding migrating brook sticklebacks is not particularly noteworthy, but from the photos I estimate there are about 8000 individuals in this one school!! This is an incredible number of fish in a small area. This huge mass of fish got me thinking about the number of small animals that we tend to take for granted. We pay attention to the billions of mosquitoes (although not so many this year!) and the 1.2 million people in Manitoba, but what about the small vertebrates like sticklebacks that don’t seem to have much impact on us? 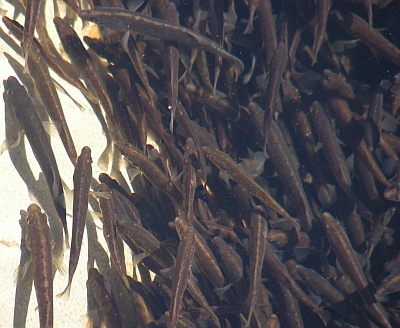 Brook stickleback are very common, but many of us don't know they even exist or we take them for granted.

Brook sticklebacks, like many small fishes, are an annual species, meaning that individuals born one summer are the adult breeders in the next. Very few last more than two summers. This is a huge turnover in biomass – think about that school of 8000 fishes, and a brand new one of those every year in just that one place! This kind of turnover is very important for nutrient cycling within the ecosystem. These small fishes grow fast and eat a lot of insects and aquatic larvae, and are themselves food for larger fishes, birds and mammals. 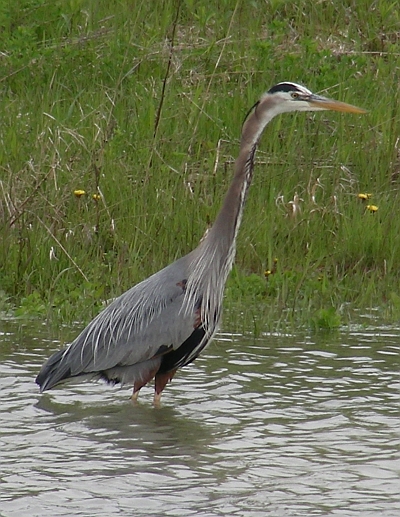 The large numbers of small fishes and frogs cycle nutrients up to more conspicuous top predators like this great blue heron.

We hear a good many frogs in spring as they call for mates, but tend not to think about them for the rest of the year as they become  less noticeable. But they are there all year, and in large numbers. During my fieldwork, I hear boreal chorus frogs (Pseudacris maculata) all along Highway 6 . If we take a 50 metre swath on either side of the highway to cover roadside ditches, and conservatively estimate one singing frog for every 500 square metres, that would mean 200 calling frogs for every kilometre of road. Calling frogs are male, so with equal sex ratios we have 400 chorus frogs each kilometre, or about 300,000 chorus frogs in the ditches along Highway 6 from Winnipeg to Thompson! And there are thousands of kilometres of roadside ditches all across the province.

A boreal chorus frog from north of Flin Flon. These small frogs (about 25 mm long) are extremely common in Manitoba and come in a variety of colour patterns from green to brown and plain, striped or spotted.

If somewhat less than one tenth of the range of boreal chorus frogs in Manitoba is suitable habitat, there are almost 50 billion square metres of chorus frog living space in the province. Even at the conservative estimate of one pair per 500 square metres, there would be almost 100 million chorus frogs in Manitoba! In June, with an additional 100 or more tadpoles per pair, there could be as many as 5 billion individuals in the province’s chorus frog population at its peak. That is a lot of bugs eaten and a lot of food available for other more conspicuous animals that we enjoy in our travels.

Even if these rough estimates are off by two orders of magnitude, there are still millions of chorus frogs in Manitoba, just as there are additional millions of individuals of other species of frogs and small fishes (like brook stickleback). These under-appreciated, inconspicuous animals in our fields and forests play a huge role in maintaining a functioning environment. Our tiny fishes and frogs are living examples of when a small thing means a lot.