I’m sure you are familiar with this scenario: getting on the internet for a specific nugget of information and then finding yourself some significant time later on some odd, but interesting tangent, and wondering, “How did I end up here?!”   Browsing the Museum collections can be a bit like a 3-dimensional internet search, where examining one specimen can bring you on a voyage across space and time to a fascinating and unexpected place.

I recently had that experience when checking our collection to see what material we had of Black-legged Kittiwake. In an earlier blog, I related my recent sighting of this gull species in southern Manitoba where it is very rarely seen. I was curious to see if we had any kittiwake specimens. As it turns out, we have no adult specimens, but I found that the Museum houses some kittiwake eggs! 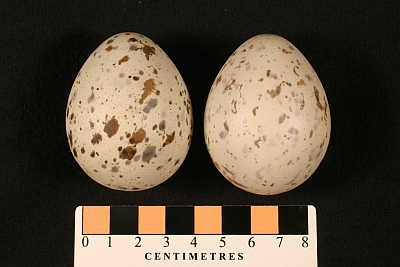 Kittiwakes do not breed in Manitoba, so of course these were not collected in the province. It is not all that surprising to find specimens from out-of-province in the collections; we use this material for reference and to put more local collections in a world context. The kittiwake eggs had come to the Museum as part of a Winnipegger’s private collection obtained in 1969, a collection that also happens to provide some of the earliest specimens of birds from Manitoba that the Museum has (Sandhill Crane and Bald Eagle, 1894). The fact that got me hooked on the kittiwake eggs was that they had been collected 100 years ago by none other than Arthur Cleveland Bent.

Now, unless you are a student of ornithology or an avid birder, you are unlikely to recognize this name. Bent was a successful businessman with an interest in birds, and was commissioned by the Smithsonian Institute in Washington, D.C. to write a series entitled, Life Histories of North American Birds. This series became his own life history, as he eventually produced 21 volumes published from 1919-1968, with the last few completed posthumously from his notes. Although encyclopedic in nature and remaining a standard reference, these books are surprisingly entertaining to read and contain some wonderful natural history writing that gives an authentic account of what fieldwork and life (not just bird-life) was like in the early 1900’s, and shares the joy of discovery.

And here in Winnipeg, we had kittiwake eggs collected by this same Arthur Cleveland Bent in 1911! Now curious, I checked and was rewarded to find that we also had an egg collected by him in that same year of the Parakeet Auklet, a mostly grey, puffin-like bird that lives in the northwest Pacific Ocean. 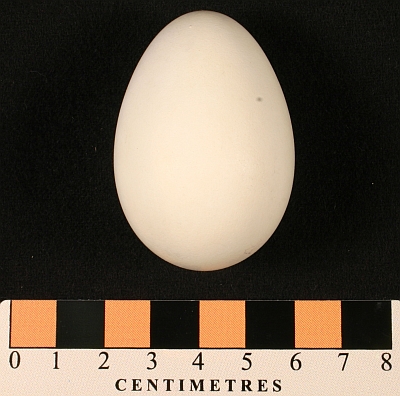 In two of his marvelous volumes (Diving Birds, 1919; Gulls and Terns, 1921), we find Bent’s original field notes describing the collection of the eggs we have in The Manitoba Museum. Both the kittiwake and auklet eggs were collected from tiny Walrus Island just off St. Paul Island in the Pribilof Group off Alaska. Bent described these birds as spending “…the greater part of their lives at sea and return[ing] to these lonely fog-bound islands in Bering Sea to rear their young, where they are wholly engrossed with the cares of reproduction.”

Getting to the islands was an adventure in itself: “Our introduction to the famous fur-seal islands was characteristic of that dismal climate. We had been sailing by compass all night from Bogoslof Island, and morning found us still groping in the prevailing thick fog, which serves to keep the seals’ coats cool and moist, but is a menace to mariners. At last, when we had about concluded that we had missed our reckoning and had passed the islands, we began to see a few of these large white-breasted auklets flying past us to the eastward. Turning, we followed them, and before long we could hear the barking, roaring, and bellowing of the fur seals in their rookeries on St. Paul Island. Feeling our way carefully toward them until we could dimly see the outline of the cliffs, we crept along the shore into Village Cove [the main town].”

How about navigating by auklet instead of GPS!! That would sure cramp our style nowadays when we even have to punch in coordinates to find the local Tim Horton’s, never mind a tiny island in a northern sea! 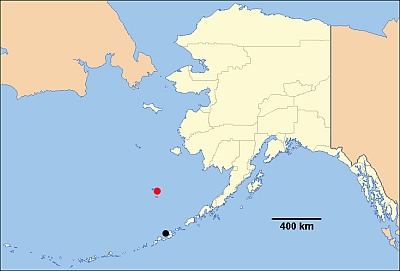 A map showing the location of Walrus Island (red dot) in the Pribilofs and Bogoslof Island (black dot) in the Aleutians. Bent sailed from Bogoslof to St. Paul Island (the main island near Walrus), some 400 km, through a thick fog by compass only. They found the island by following sea birds.

Despite the initial doubtful outcome of the trip, Bent had no reservations about his work once there: “On July 7, 1911, I spent one of the most eventful afternoons of my life studying the nesting habits of this and the hosts of other sea birds that make their summer home on the wonderful, little, rocky islet of the Pribilof group, Walrus Island.”

I am fond of Bent’s description of the kittiwakes and their nests from which our Museum eggs came: “In Bering Sea we found this to be one of the commonest gulls and found it breeding on all of the islands where it could find high rocky cliffs. On Walrus Island, where there are no high cliffs, we had an unusually good opportunity to examine the nests. Among the hosts of sea birds which made their summer home on this wonderful island a few little parties, of from four to six pairs each, of Pacific kittiwakes found a scanty foothold on the vertical faces of the low, rocky cliffs. Here their nests were skillfully placed on the narrow ledges or on little protuberances which seemed hardly wide enough to hold them, and often they were within a few feet of nesting California murres [another puffin relative] or red-faced cormorants, with which the island was overcrowded. The nests were well-made of soft green grass and bits of sod securely plastered onto the rocks and probably were repaired and used again year after year. They were well-rounded, deeply cupped on top, and lined with fine dry grass. Most of the nests, on July 7 [1911], contained two eggs, some only one, but none of them held young. The incubating birds and their mates standing near the nests were very gentle and tame. We had no difficulty in getting near enough to photograph them.” Or, apparently, to collect a few of their eggs! 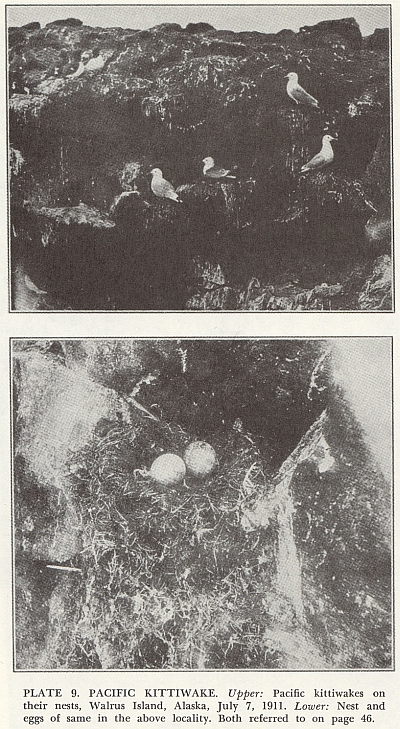 A plate from A.C. Bent's "Life Histories of North American Gulls and Terns" (1921) likely showing the birds that laid the eggs in the Museum collection, and perhaps our eggs in the nest.

Taking short trips like this in the Museum time machine, via collections and the natural history and human stories they tell, makes me wonder at times if I was somehow born a century (or more!) too late. Not as a knock on the modern approach, but wouldn’t it be fun to open up a modern nature guidebook and find such enjoyable, yet informative prose? Bent’s descriptions convey a joy in observation and discovery, as well as a respect for the organism that is inspiring. Museum collections and the stories they tell can help us make a better connection and foster a deeper appreciation for our fellow Earthlings and their habitats, something that can only be for the good as our world view is increasingly dominated by concrete, steel, asphalt, and electronic/entertainment media.