“I will be unavailable until…” has been a frequent message when my number has been dialed over the last two months. And although a couple of days might have been vacation, the majority is explained by time spent on fieldwork, hence the lack of blogging. So what is “fieldwork”? For Museum curators, it means getting out of the office to collect information relevant to our collections or research projects. In zoology, this usually means to be out standing in the field – or sometimes forest, stream or pond. 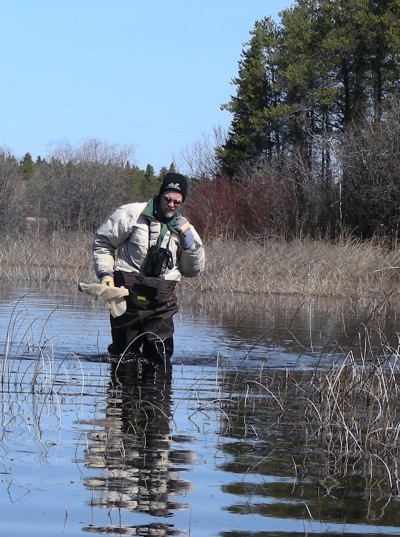 As wonderful as it is to be out of the city, away from phones and e-mail, and in a remote part of the province searching for fishes, frogs, toads, and snakes, fieldwork is challenging for all these same reasons. In the city, we have more-or-less regular hours, a family to come home to, and our needs and wants are only a phone call (or mouse-click) away. On remote islands, dirt tracks, or wading muskeg north of 60, you better have all you need in your backpack. 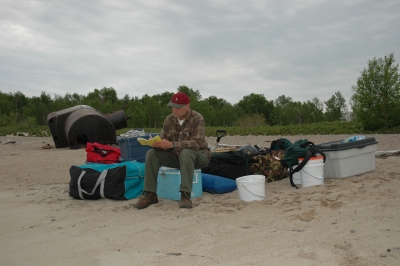 Wonder if we brought enough food if the plane doesn't show up?

And you don’t do fieldwork because the hours are good. For frogs and toads, daylight hours are used to scout out potential habitat and to look for eggs and tadpoles. But to find the adults in any numbers, you need to return to these sites when it is dark and males are serenading for lady friends. Up north in June, when the mosquitoes are hungry, many frogs and toads don’t begin calling consistently until about 11 pm! It can make for a long day (and night).

Regardless, we’re crazy enough to enjoy it – the thrill of the chase and of the discovery is alluring. And the beautiful surroundings, fresh air, and the sounds of nature are interrupted only by the occasional late-night/early morning trucker trying to make a deadline.

A truck zooms by a collection site towards Ponton at 4am.

But why are we out there all hours of  the day and night? Even basic knowledge of many species in Manitoba gets to be pretty thin once you get out of the southern quarter of the province. The distributional limits of even common vertebrates like frogs and toads, never mind invertebrates (like spiders and insects), have not been accurately determined. This kind of basic knowledge is important if Manitobans want to know what kind of impact we might be having on the environment, or if we want to know if climate change might be altering living conditions. If we don’t even know where the animals (or plants) live, how can we know if their distributions are changing?

A Canadian toad, left, faces off with an American toad, right.

In the south, the American toad (Anaxyrus americanus) and Canadian toad (A. hemiophrys) are reported to have a contact zone just east of Winnipeg running south from Patricia Beach to the Canada/U.S. border. Over the last few decades it appears to be moving westward. Is the same happening in the northern parts of the province? We just can’t say because we don’t even know for sure if there IS a contact zone.

This spring, I extended the known range of Gray Treefrog (Hyla versicolor) northwards to the Saskatchewan River and that of the Spring Peeper (Pseudacris crucifer) westwards to almost the border with Saskatchewan. Are these recent species movements or just an artifact of more thorough searching and finding them where they’ve always been?
Future fieldwork by Museum personnel and by other scientists will give a clearer picture of where our animals (and plants) live now, and allow us to monitor these species for any changes in distribution This seemingly basic information is critical to formulating environmental policy and to making informed decisions about the kind of province we want to live in. It also provides the data necessary to investigate the history of how species re-populated Manitoba after the last ice age. And museums, like The Manitoba Museum, play an important role in providing and archiving this information through fieldwork and collections, as well as analyzing it.
So the next time you call a curator and hear, “I will be unavailable until…”, we might just be trying to figure out what lives in your backyard and how it might have gotten there.