From Acquisition to Exhibit – One Artefact’s Journey

The artefact is a horse watering trough, which would have been a common sight in public spaces up until just over a century ago. TMM did not have anything like this in its collection, so it was approved for acquisition. Normally, once the collections management process is followed, it ends with the artefact or specimen being found a home in one of our storage areas; however, in this case, Curator of History Roland Sawatzky thought that there was an empty area in the Urban Gallery where the horse trough would naturally fit.

We have a formal Exhibit Procedure at the museum, so Roland followed this while the artefact was proceeding to be accessioned, catalogued, photographed and condition reported. Ultimately, the idea was approved for this unique object to take its place in TMM’s permanent galleries.

The horse watering trough is made of painted steel. It is quite stable, but did need some conservation treatment – a good cleaning – before it was at its best to be displayed. 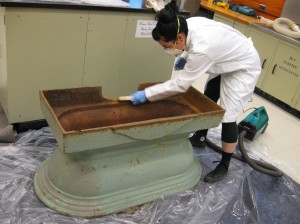 Conservator Lisa May cleans trough with a wire brush

After the conservation treatment and documentation, the watering trough was brought down to the Urban Gallery on a Monday when we’re closed to the public, and placed in position against the wall between the Proscenium Theatre and Amy Galbraith’s Dress Shop. It took several sets of strong arms and legs to lift and lower it into position. 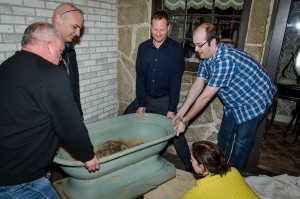 Again, I have to emphasize that this is a rare case, when a newly acquired object goes on long-term display shortly after it arrives at The Manitoba Museum (yes, eleven months is relatively short in the museum world). In this instance, the artefact fills a gap in the gallery space, and helps tell a story we weren’t telling before – a reminder that horses used to be ubiquitous in the city, before motorized vehicles became common. The next time you visit the Museum, be sure to check it out! 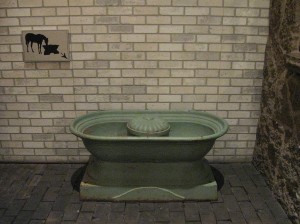 The horse watering trough in the gallery