How to disassemble an artefact

Recently, conservator Lisa May worked with the Museum’s Operational Services staff to smoothly disassemble an artefact so it could be moved out of a basement storage area. The artefact is a display case that came from a prominent Winnipeg business, Winnipeg Music Supply, which closed in 1984, at which time the display case was donated to the Manitoba Museum.

It was stored for many years at the Museum’s storage building on Lily St., in a basement room. In 2010, a pipe break and subsequent water infiltration led to the decision to remove all artefacts stored at basement level, due to concerns of a major mould outbreak (See blog post “Lily St. Storage Move”, Sept. 3, 2010). Every other artefact was removed from the basement, but this display case was too big and heavy to take out as it was. Finally, last month it was taken apart; and last week, it was hoisted up onto the main floor of the storage building.

Taking the case apart was no simple operation. Lisa and carpenter Marc Hébert spent considerable time examining the case to see how it was put together. Lisa drew a diagram indicating which areas should be worked on first, noting things to check as they went along.

First of all, the drawers and all separate pieces were removed. Then the interior display surface was removed, and next the marble trim from the bottom. The pieces were all numbered for ease of reassembly. Then the back was taken off, and the case lowered onto its back side. The top was carefully pulled off. After that, the sides came apart quite easily, and finally the two halves were separated from the centre column. 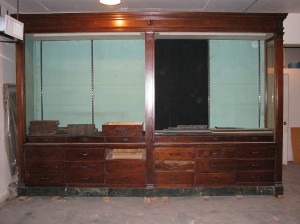 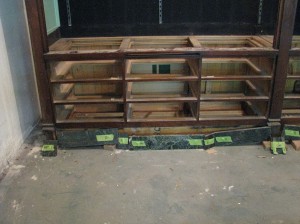 The marble trim was labeled for identification 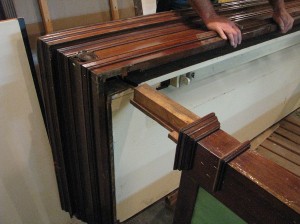 The top, all one piece, was carefully pulled off 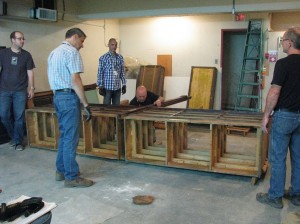 The pieces were lifted to the main level of the building using a hoist, and now sit waiting, with all the other artefacts, for the time when they will be moved into a different storage facility – for this building will be demolished to make way for a much-needed multilevel parkade.

Although a relatively small project, it required careful planning and many hands (and backs!) to accomplish without damaging the artefact. Our Operational Services staff are professional and experienced, but not conservators, so Lisa’s input and guidance was required. Everything went well, and we look forward to the day (coming soon, we think) when this case will be moved into an improved storage environment.