Look up, way up… at the dust on the Nonsuch’s rigging and spars. Museum staff have not been able to climb the ship rigging since Manitoba Workplace Safety and Health regulations were amended several years ago. In order to address the stricter requirements, steel safety cables were installed in the Nonsuch Gallery two years ago. However, they turned out to be less usable than we hoped.

As part of a Conservation Assessment, the Nonsuch was examined by a team including conservation consultants and a ship rigger. One of the recommendations from the assessment was to switch to rope safety lines, for reasons relating to ease of use during climbing. Another recommendation was to add more safety lines, at different spots on the gallery ceiling. 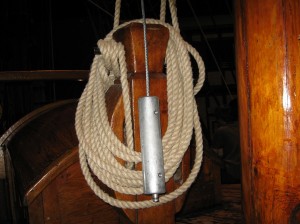 A view of one of the original steel safety lines

As a result, last month an engineer was lying on a temporary platform at the Nonsuch Gallery ceiling, lowering a plumb line so the rigger could confirm the correct spots to install additional anchors for the new lines. 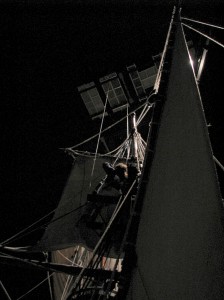 Dropping a plumbline from temporary platform at ceiling

The new locations were confirmed, the anchors installed and new synthetic rope safety lines attached. The last task remaining is to do a Risk Assessment and Job Hazard Analysis. After that, we’ll be able to once again climb in the rigging, to do some much-needed cleaning of the lines and sails. Because it’s been several years, we need to plan how best to attack the dust.

The Nonsuch is an unusual thing: a full-sized ship replica, with working rigging, in an indoor setting. There are few other museum ships like it. Although it is an artefact, it is important to keep the rigging at least in working order. Similar to some artefacts in science museums, keeping moving parts static will contribute to their deterioration – ropes will get stiff and develop kinks, making their movement harder and harder, and affecting other parts such as the blocks the lines run through. Keeping the Nonsuch “shipshape” requires regular cleaning and maintenance; soon, one part of that work will be resumed. 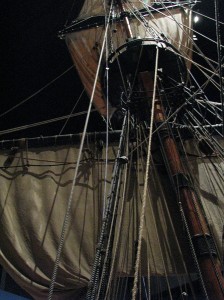 From a distance, the safety lines blend in fairly well. 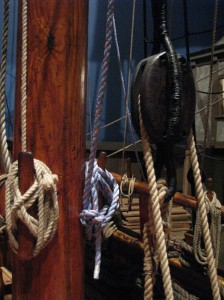 Close up, they do stand out. I think we'll move this one somewhere less visible.