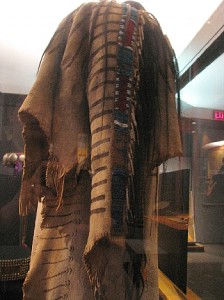 Several beads broke off this sleeve 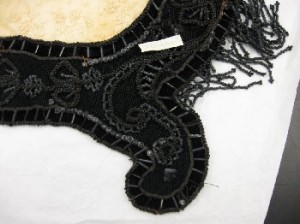 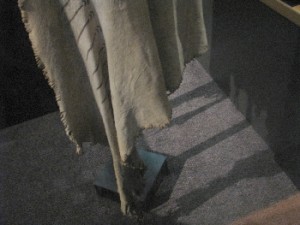 It was hard to see the bead pieces against the carpet 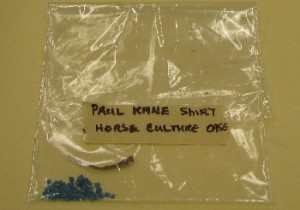 We will try to get the pieces examined and tested

Recently, our Curator of Native Ethnology Katherine Pettipas contracted a photographer to take photos of the varied artifacts in the Paul Kane collection. Paul Kane was an artist who, in 1847, was sent by the Hudson’s Bay Company to travel across the Canadian wilderness, drawing and acquiring objects along the way. One of the spectacular men’s hide shirts from that collection is currently on exhibit in our Grasslands Gallery. When Conservators Lisa May and Ellen Robinson went into the case to remove the shirt for photographing, they noticed that several pieces of bright blue beads were on the floor of the case. They wrapped the shirt on its mount in a white cotton sheet to bring it to the photo studio. When they unwrapped it, a few more beads fell off in pieces. They then called me to take a look at the condition of the shirt.
There is a phenomenon called “glass disease” that causes glass to deteriorate. It’s basically the result of an improper mix of ingredients when the glass was made – not using the ingredients in the right proportion. It‘s often accelerated by high humidity, and it’s irreversible – the glass can’t be “fixed”. The glass beads on this hide shirt seem to be spontaneously falling apart. The most likely cause is glass disease, but the beads don’t have the characteristic white surface coating usually seen in the process. Is it glass disease, or something else? We may have to get the beads examined and tested.
If it is glass disease, there’s not much we can do to stop it. The chemical reaction could be halted by putting the beads in an oxygen-free environment, but that involves either building a specialized exhibit case filled with an inert gas, removing the shirt from display and putting it in an oxygen-free container or bag, or removing the beads from the shirt. None of these are simple solutions. Alternatively, we could monitor the condition of the beads – so far, only a few are affected- and attach a covering of (almost-invisible) silk crepeline over the area of the sleeves where the blue beads are found, so they don’t actually fall off.
It’s something that probably wouldn’t have been noticed if the shirt hadn’t been taken out for photos. The bead pieces were barely noticeable on the carpeted floor of the case, and there weren’t many of them. Now, we should determine if the beads do, in fact, have glass disease. If they don’t, why did they break and fall off? The sinew they were strung on is intact. If they do have glass disease, what do we do? So far, only a few beads on one side are affected. I’m thinking we should just monitor the condition, and possibly cover the beaded part with crepeline. Even that isn’t simple, as there is little to sew to on that panel, but we might be able to use an adhesive. We had no idea there was a problem with this artifact, but now I have to research and consult with colleagues to decide on the best thing to do.