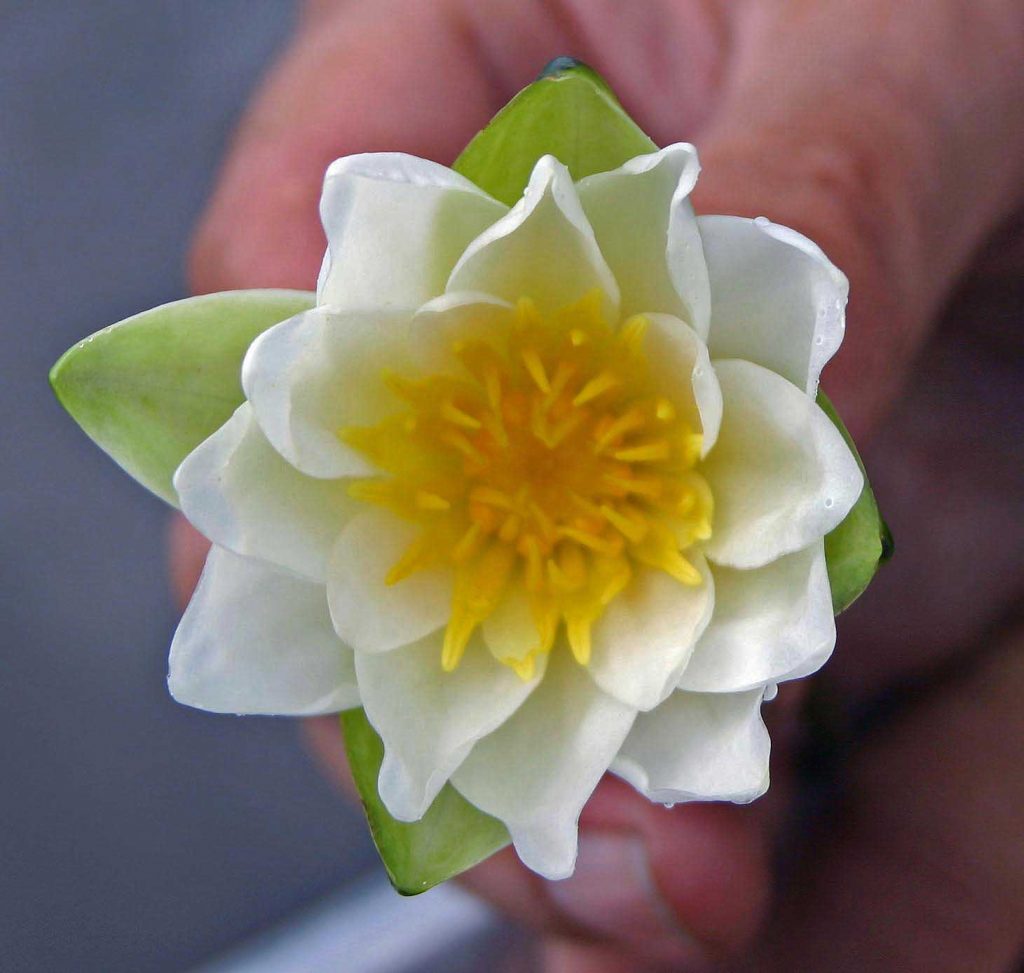 I’m a landlubber I admit it. How could I not be? I’m from Saskatchewan. That’s the driest place in the country! Not only is it completely devoid of coastline, but its largest lake is practically in the arctic. Before I came here I did field work in Grasslands National Park, a place where the Frenchman “River” is shallow enough to wade across. Then I did field work in the Great Sand Hills, a place where there is no water at all, just sand.

When I moved to Manitoba I noticed right away that something was wrong; the air was weird. I’m used to having all the moisture sucked out of my body by hot, dry air. In Manitoba I felt damp, like I was perpetually in a steam room. I began noticing that the vegetation was unusual as well. Plants that grew up to my ankles back in Saskatchewan were up to my waist here. And there were weird mushrooms sprouting up everywhere—even in the city—things that looked like brains and hair and ears. Lichens cover everything that doesn’t move: rocks, trees, benches, farm equipment. Sit on a bench long enough and they’ll probably start growing on you. 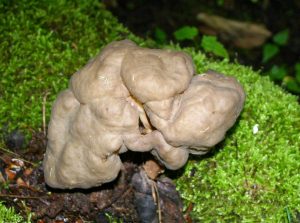 I had never seen so many weird mushrooms until I moved to Manitoba. This brain-like mushroom is a false morel (Gyromitra).

Being a prairie girl, I was attracted to the idea of doing field work in tall grass prairie, an ecosystem that I was unfamiliar with but that I assume (incorrectly) would be dry. So I got permission to do some pollinator research out at the Tall Grass Prairie Preserve in 2004. When I got there, I could barely find any prairie that wasn’t soaking in at least a foot of water.  Eventually I found out about Spruce Woods Provincial Park and its famous sand dunes. “Now that’s my kind of park” I thought “dessicatingly dry”. But as it turns out Spruce Woods ain’t no Great Sand Hills. Sure there are dunes there, but they’re surrounded by spruce forests, wetlands, a river and little springs bubbling out of the sand. Even the deserts in Manitoba are wet! 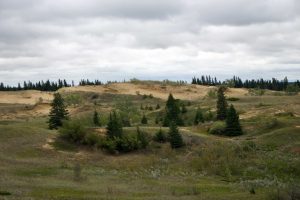 The dunes at Spruce Woods Provincial Park are actually pretty wet. There are rivers, lakes and springs in the park as well as sand dunes.

Then one day I was asked to prepare a collections assessment report to identify gaps the Museum’s plant collection.  I found out that of the 562 species of native plants that are underrepresented in the collection, a whopping 43% of them grew in some kind of wetland: a bog, a riparian area, a lake or a marsh. Clearly, reducing the gaps in the collection was going to require that I get wet. But I was reluctant to dive in to aquatic plant botany, never having done it before so I decided to focus my research on pollination ecology and ugly little rare plants that grew in sand dunes. As a result, I was able to avoid wetlands for many years.

Then one day a man named John Wiersema called me up. John is an American water-lily expert who helped write the volume on those plants in the Flora of North America. He had discovered several unusual herbarium specimens of water lilies from Canada, including one on the Minago River, which he thought might be a different species. But he needed fresh material to do genetic work to make sure. Was I willing to come along with him to search for this species? I was wary. We might need a boat. I don’t really do boats. “Perhaps we could just walk along the river bank?” I suggested.

Well that turned out to be a terrible idea as the banks of the Minago River just off of highway 6 contain the densest collection of deadfall and brush that I’ve ever bushwhacked through. I can’t recall how many times I tripped and very nearly impaled myself on a fallen log. Fortunately, John determined that that part of the river seemed unsuitable for this particular water-lily so we cut our surveys short. We decided to go further north to where the Minago crosses the highway leading to Manitoba Hydro’s Jenpeg Generating Station. Although no one at Manitoba Hydro was available to take us out on the water that day, they generously offered to fly us up at a later date and arrange a boat trip down the river. It was on that trip that I was to see what a real aquatic botanist was made of. 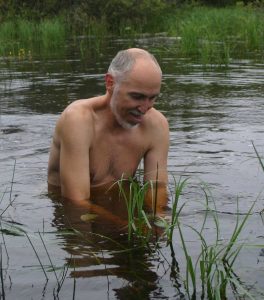 John just jumped in the river when he saw a plant he wanted.

A year later, John and I boarded a plane for Jenpeg. While on that trip I discovered the secret to becoming a successful aquatic botanist: you have wear clothes that you can remove quickly and easily.  When John saw a water lily he wanted, he just tossed off his shirt, unzipped his pant legs and dived right in. As it turns out, jumping into the river paid off. John got the specimens he needed, arranged for genetic analysis and was eventually able to publish a paper describing and naming the new water-lily: Lori’s Water-lily or Nymphaea loriana. Later on we published another article on the ecology and distribution of this species in The Canadian Field Naturalist, which won the James Fletcher Award for best paper in 2016.

It’s amazing how many aquatic plants you can collect from a shore line without actually stepping in the water. I spent many days combing shorelines for aquatic plants that had washed up so I wouldn’t have to go in the water. Out at Turtle Mountain and William Lake Provincial Parks I discovered the joys of lake docks and wetland boardwalks! I was able to collect all sorts of plants by just lying on my belly and reaching as far as I could. When necessary I used my trusty hiking pole to capture a few things that were just out of reach. I even went boating to collect a few things. Paddle boats are great for this. I know they’re the goofiest looking boats invented but for a botanist that wants to collect aquatic plants they are awesome. All in all I was pretty pleased with myself for avoiding the water. 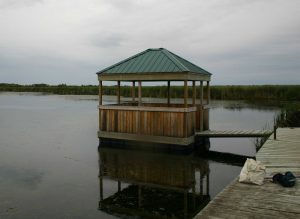 Boardwalks are great places to reach submerged aquatic plants. This one is in Hecla Provincial Park.

Then the moment I had been dreading finally happened. There was an aquatic plant in flower that I really, really wanted. I searched the shoreline in vain for one that had washed up. Nothing. None were in arms reach. I was defeated: I’d have to get wet. So I took off my hiking boots and waded in. To my surprise the water was wonderful! I had spent all afternoon hiking up the Turtle’s Back peak and my feet were hot and sore. Sticking my feet in that cool water and squishing my toes around in the mud felt great. Eventually I realized that getting wet to collect a plant isn’t such a bad thing after all. 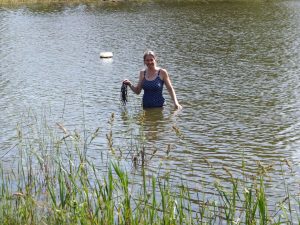 The botanist in the lake with a freshly captured specimen.

P.S. Collecting plants in national and provincial parks is illegal (with the exception of berries and mushrooms) unless you have a permit (which I do).