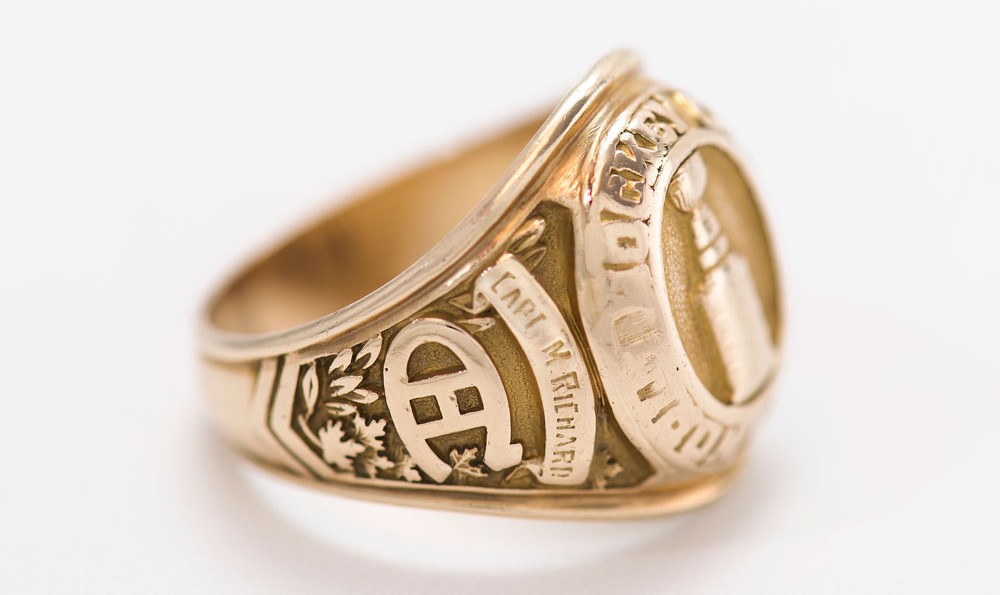 “Rocket” Richard’s ring, Maurice Richard’s Stanley Cup championship ring, Montréal, QC, 1959
© Canadian Museum of History
A tremendously skilled hockey player, Maurice “Rocket” Richard gained a heroic stature that transcended his on-ice career. By the end of his life, he had become a living legend.
(Winnipeg, MB July 5, 2018): From small ponds to massive arenas and from living rooms to boardrooms, hockey matters to Canadians. It’s a thrilling game to play and watch, a rite of passage for children, a cornerstone of popular culture, and a big business. Above all, hockey is a national obsession that brings Canadians together. Now, the Manitoba Museum is getting into the game with Hockey: The Stories Behind Our Passion, a power play of an exhibition developed by the Canadian Museum of History.

Showing until January 13, 2019, this wide-ranging exhibition of artifacts, player profiles, iconic images, memorabilia, and more, will shine a light on the origins of the game, its evolution as a sport, and its enduring power as a cultural phenomenon. It will also reveal what our passion for hockey says about us as a people.

“We are very excited to bring Hockey: The Stories Behind Our Passion to Winnipeg, particularly at this time,” says James Cohen, Chair of the Manitoba Museum’s Board of Governors. “Manitoba was blinded by the Jet’s whiteout this spring. Our lives were taken over by our passion for our team as the Jets fought and scored their way through the playoff rounds. This exhibition is going to help us all understand why this hockey town got hit so hard by the love of the game.”

“Hockey is intertwined with our history and our national identity. The millions of Canadians who enjoy the sport, on or off the ice, are proof that it transcends language, geography, age, and gender,” said Mark O’Neill, President and CEO of the Canadian Museum of History. “We are proud to share this exhibition with the people of Manitoba.”

Hockey: The Stories Behind Our Passion features 280 artifacts that tell the story of the game’s cross-cultural roots and its central role in Canadian communities and popular culture. Some of these historical and contemporary treasures are from the Museum of History’s own collections. Others are from 50 organizations, including the Manitoba Museum, Canada’s Sports Hall of Fame and the Hockey Hall of Fame.

The star artifacts that anchor Hockey: The Stories Behind Our Passion are sure-fire crowd-pleasers. They include: Paul Henderson’s Summit Series jersey worn as he scored the final winning goal in the 1972 game against the Soviet team; Jacques Plante’s revolutionary “pretzel” goalie mask; five-time Olympic medallist Hayley Wickenheiser’s skates and Maurice “Rocket” Richard’s All-Star jersey and Hall of Fame and Stanley Cup rings. But these treasures carry weightier messages as well, about innovations in player safety, advances in gender equality, and shifts in cultural politics.

Also among the artifacts not to be missed ― and which will only be presented at the Manitoba Museum ― is a rare 1934 Ottawa Senators jersey worn by Nick Wasnie of Winnipeg during the team’s last season before the franchise was moved to St. Louis (and then its return to the NHL in 1992).

Other objects, such as singer Shania Twain’s hockey-inspired stage costumes, hockey cards, and table hockey games, confirm the sport’s remarkable cultural influence far beyond the rink and encourage visitors to consider what Canadians’ love of the sport reveals about us as a people.

This unprecedented collection of artifacts from Canada’s game, along with historic highlight reels, photographs, memorabilia and popular hockey-related songs and movies will appeal to visitors of all ages. 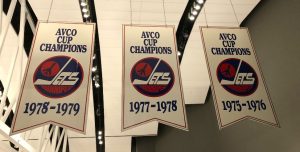 The Manitoba: Heart of Hockey exhibition was developed by the Manitoba Museum to coincide with Hockey: The Stories Behind Our Passion.  Exploring themes of diversity, rural communities, the dream and professional hockey, the exhibit highlights a variety of objects that represent hockey history across the province.

Hockey: The Stories Behind Our Passion and Manitoba: Heart of Hockey are at the Manitoba Museum from July 6, 2018 to January 13, 2019. The travelling Hockeyexhibition was developed by the Canadian Museum of History, where it was presented in 2017.