Manitoba Museum becomes a partner of Winnipeg’s Indigenous Accord 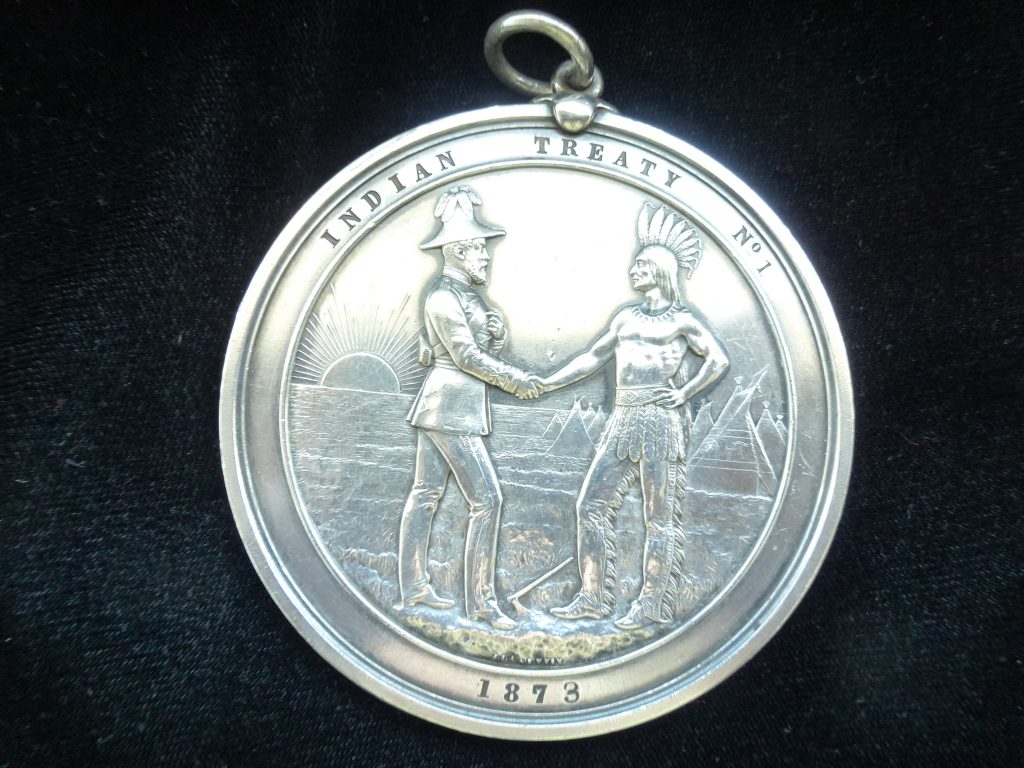 One of the eight Treaty medals in the Museum’s collection, the Treaty No. 1 Medal
(HBC-57-53) commemorates the Treaty negotiated at Lower Fort Garry in 1871.
The medal denotes the binding nature of Canada’s promises to First Nations people.

(Winnipeg, MB: June 21, 2018) The Manitoba Museum is proud to be one of over 100 organizations, businesses, groups, and individuals to join the City of Winnipeg in their commitment to reconciliation by formally becoming partners of Winnipeg’s Indigenous Accord at a signing ceremony at City Hall yesterday.

“The Manitoba Museum has a long history of working collaboratively with Indigenous communities, and we are very excited to join the Indigenous Accord,” says Seema Hollenberg, Director of Research, Collections, and Exhibitions. “We look forward to our continued commitment to reconciliation and inclusivity in the representation, presentation, and interpretation of Indigenous stories and experiences at the Museum.”

Through the Accord, a joint commitment has been made to build a process of reconciliation based on the establishment and maintenance of mutually respectful partnerships with First Nations, Métis, and Inuit governments, organizations, and individuals. The signatories are committed to observing the commitments, shared values, and principles expressed in this Accord, which on June 20, marked its one-year anniversary.

The Museum will work with Indigenous and non-Indigenous Winnipeggers in partnership, respect, equal opportunity, and hope. In this spirit, the Manitoba Museum is committed to responding to the Truth and Reconciliation Calls to Action, specifically 63, 65-69, and 92i. Projects currently underway include: an Indigenous knowledge and language reclamation project Six Seasons of the Asinishow Ithiniwak in collaboration with the University of Winnipeg; the Indigenous Scholars-in-Residence Program enabling Indigenous post-graduate university students scholarly access to the Museum’s collections to advance their academic practice; the Governor-General’s Award winning Sprit Lines Northern outreach project with partners Norway House Cree Nation, Garden Hill First Nation, and University College of the North and; the Museum’s continued commitment to adding Indigenous aural and written language to new exhibitions – the most recent an oral history of first European contact as told by Cree Elder Louis Bird

The Museum has been committed to answering the Calls to Action for many years.  In 2015, the We Are All Treaty People and The Berens Family Collection exhibits were installed, both focusing on First Nations’ perspectives on Treaty- making. Programs and workshops related to Treaties in general, and Treaty No. 1 specifically, have been developed and delivered to many audiences since 2015.

The Mayor’s Indigenous Advisory Circle developed the Accord, and it is unanimously supported by the City of Winnipeg Councillors. Rooted in the Truth and Reconciliation Commission’s (TRC) 94 Calls to Action, the Accord will guide a shared commitment to the Journey of Reconciliation. As a signatory to the Accord, the Museum accepts the responsibility of becoming a partner and will report on the success of their commitment to reconciliation and their future goals in their Annual Report, and on their website on an annual basis.