“All my love for you and you only” 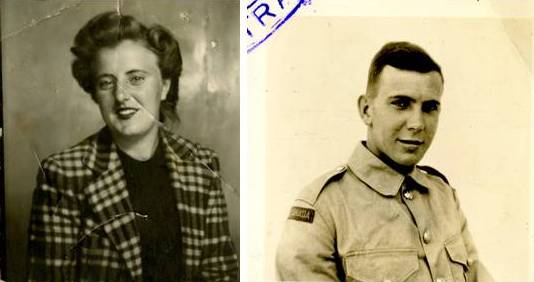 They began courting and after Jimmy enlisted with the Winnipeg Grenadiers, exchanged love letters while he was stationed on garrison duty in Bermuda and Jamaica at the beginning of WWII. His parting words in nearly every letter were “With all my love for you and you only” and he signed many of them “Diamond Jim”, a reference to a popular comic strip of the era, according to his younger sister, Dorothy. 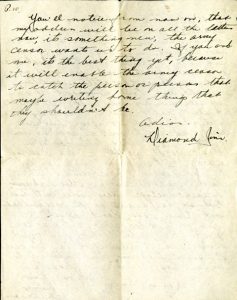 When Jimmy returned to Winnipeg on furlough in October 1941, the couple married at her parents’ home on Bonner Avenue, with her sister Marguerite and his friend Harry Robinson, a fellow Grenadier, serving as witnesses. Within days of marrying, Jimmy and the rest of the Winnipeg Grenadiers were shipped out to Hong Kong. 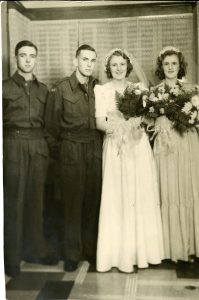 Jimmy wrote to Eleanor about his journey through western Canada and the uneventful voyage across the Pacific Ocean. Upon arriving in Hong Kong, he sent his new bride a beautiful green silk pyjama set and slippers, along with letters about life abroad. 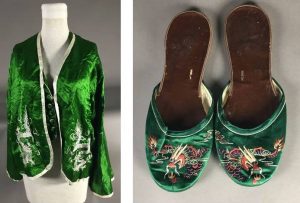 Expecting a quiet assignment at the former British colony, the Canadian military was surprised when the Japanese army descended on the island of Hong Kong on December 8, 1941. After a 17 day fight, dubbed the Battle of Hong Kong, the Canadians capitulated on Christmas Day and Canadian, British and Indian survivors were taken as prisoners of war of the Japanese for the next 44 months. Private James Brady did not survive the battle, dying in combat on December 19, 1941. In the ensuing chaos, his wife, mother and sisters did not receive word of his passing until January of 1943. 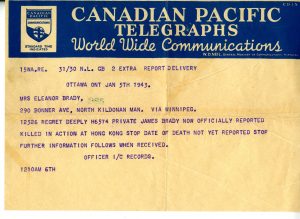 Following the war, widows and mothers of the war dead were given the Memorial Cross medal. Eleanor, widowed at age 17, fastened her engagement ring to the purple silk ribbon of the medal she received and stored it away with the letters, pyjamas, photographs and other objects she had saved from her brief marriage. 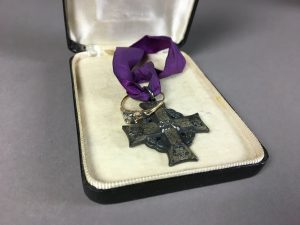 Eleanor went on to marry again and had four children with her second husband. She spoke little of her first love, but even after her passing in 2005, her daughters kept the trove of mementos safe in her stead. Last summer, after learning of the Manitoba Museum’s Hong Kong Veterans collection on the local CTV morning show, her daughters made the decision to donate Eleanor’s treasures to the museum. These objects complement the collection in a unique, albeit tragic, way: we have very few materials from Winnipeg Grenadiers who did not survive the Battle of Hong Kong and subsequent internment. The family also connected us with Jimmy’s surviving sister, Dorothy, who came to the museum to view the new acquisitions –she commented that Jimmy always had excellent handwriting and was a prolific letter writer. Dorothy imparted more information about Jimmy’s short life for our records and donated the Memorial Cross medal her mother had received 70 years earlier, after the loss of her only son. 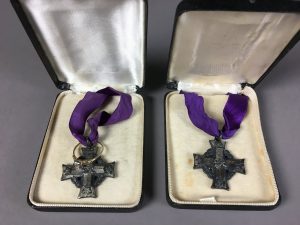 These new acquisitions have been carefully catalogued and photographed, detailing the story of Jimmy and Eleanor, his death and the events that followed. His story continues through the preservation of his written word and the objects he lovingly chose for his young bride. All his love for her and her only. 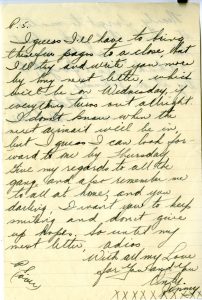