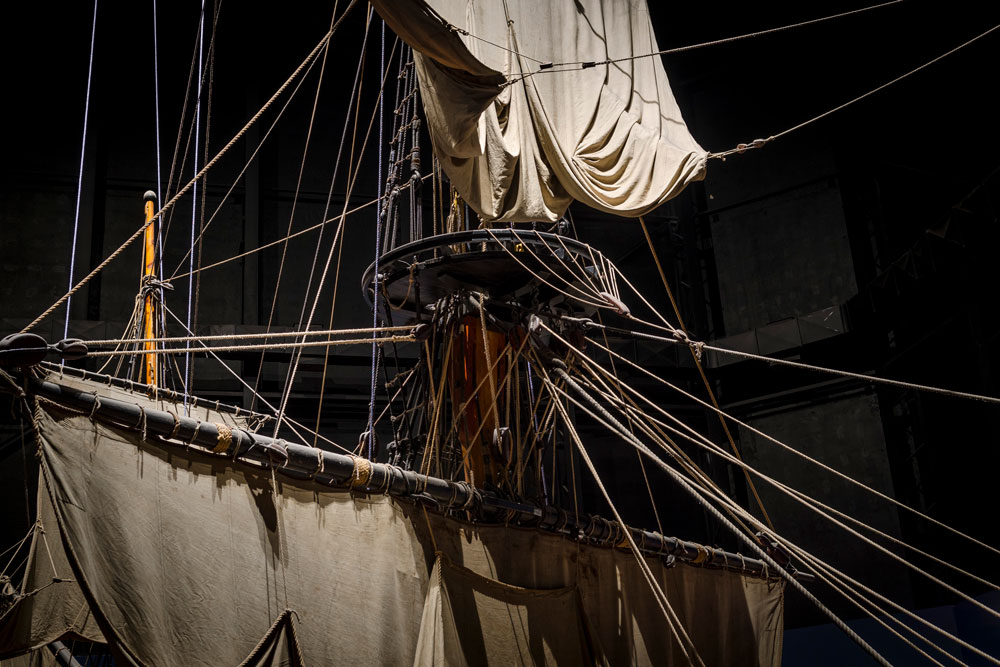 Winnipeg, MB (January 23, 2018): It’s all about sea-faring adventures at the Manitoba Museum these days. he Nonsuch Gallery is being renewed. A team of ship rigging experts will be attending to the ropes of the Nonsuch. A curator will talk about her “expedition tourism” adventure. A scale model of the Franklin Expedition’slong-lostt HMS Erebus wreck will be on display.

It’s Not a Pirate Ship! Stories of Modern Day Rigging

Over the next few months, one of the Manitoba Museum’s most beloved artifacts – the Nonsuch – is undergoing a complete re-rigging to update her ropes, clean her sails, and bring her back to “sea-ready” form.

The Museum is hosting a family-friendly event on Saturday, February 10 between 2 and 3 pm where visitors can find out what it’s like to be a modern-day rigger! The Museum has hired professional ship riggers who have spent years working on ships around the world. From San Francisco, to Sweden, to the set of “Pirates of the Caribbean,” team leader and historical rigging expert Courtney Andersen will share his fascinating stories.

Come hear about what’s happening behind the scenes while the Nonsuch Gallery is temporarily closed for a major gallery renewal. The Gallery re-opens in summer 2018! Tickets to the event include all-day admission to the Museum Galleries and are available online: $14 General / $11 Members, $9 Child/Student / $6 Member. Kids under 3 get in free!

Is There an Archaeologist Aboard? – Brown Bag Lunch Series

Dr. Amelia Fay, Curator of HBC Museum Collection will share tales of her experience on an Adventure Canada expedition tour on Tuesday, March 6 from 12 noon to 1 pm in the Museum Auditorium.

Just as the crew of the Nonsuch was assembled to venture in search of the new world, Adventure Canada brought together scientific experts, artists, and culturalists to offer passengers educational experiences on their amazing two-week Greenland-Labrador voyage.

The role of archaeologist on the trip is especially important as the ship is required to have a permit-holder on board to not only interpret the archaeological sites, but ensure their preservation. Dr. Fay’s expertise in Labrador Inuit archaeology equipped her to fill that role for the journey.

All talks in the Brown Bag Lunch Series are included with admission to any of the three Museum venues (Museum, Science Gallery or Planetarium), or FREE for members!

The Manitoba Museum has received a scale model representing the wreck of HMS Erebus and its surrounding debris field, just as it was first seen by Parks Canada underwater archaeologists on September 2, 2014. The 1:40 scale model can be viewed in the Arctic/Sub-Arctic Gallery from January 26 to March 21, 2018.

The model helps to tell the story of the Franklin Expedition, when Sir John Franklin set sail from England in 1845 with two ships, HMS Erebus and HMS Terror, in search of a Northwest Passage across what is now Canada’s Arctic. The ships and crews vanished and dozens of search expeditions set sail to try to find them. The wreck was found sitting on the seabed only 10 metres below the surface. This model is the result of close collaboration between the Parks Canada and expert model maker Fred Werthman, and based on the original ship plans and current research.

The HMS Erebus model briefly joins the Franklin Exploration pop-up display, which has been on display in the Arctic/Sub-Arctic Gallery at the Manitoba Museum since September 2016 and is included with regular admission to the Museum Galleries.