Dress Up For Hallowe’en All Year Long

We humans are not the only ones who like to dress up; sometimes animals disguise themselves to look like something else, like we do at Hallowe’en. They may be trying to look like something else or it could be a warning. The ecological term for this is mimicry. There are many different types of mimicry, and differing reasons why an animal would try “look” like something else. I was reminded of this recently when I catalogued a clear wing moth that looked like a wasp. Hover flies also resemble bees or wasps to discourage other animals from eating them, as do some butterflies.

I first learned about mimicry years ago during a summer job when I was collecting information about differing types of moths. Near some flowers was a hover fly fluttering about. The research scientist I was working for told me not to worry, that it wouldn’t sting me because it actually was a moth, and it was there to drink nectar from the flower. I thought that was so cool!

Sometimes bright colours are used by animals to warn possible predators that they contain toxic or bad-tasting chemicals. It’s a bit like wearing a costume to scare you.

And other animals may adopt these bright colours pretending to be toxic, when they actually are not! The king snake lives in areas where the coral snake occurs, and looks very similar to the coral snake. It takes advantage of the coral snake’s warning colouration.

Stick insects are not dangerous to humans, but many are predators of other insects. They have evolved an appearance that looks just like a twig. They remain very still, and if an unsuspecting insect wanders too close, they grab it and eat it! There are even some other insects that look just like leaves!

Another reason animals try to blend in with their surroundings is to keep themselves safe. This is a type of mimicry usually called camouflage, and many of our Manitoba animals such as rabbits, mice, squirrels, and deer use camouflage. Our Museum galleries have lots of examples of camouflage. This picture is from one of the galleries in the Manitoba Museum.  Can you can spot the bird? 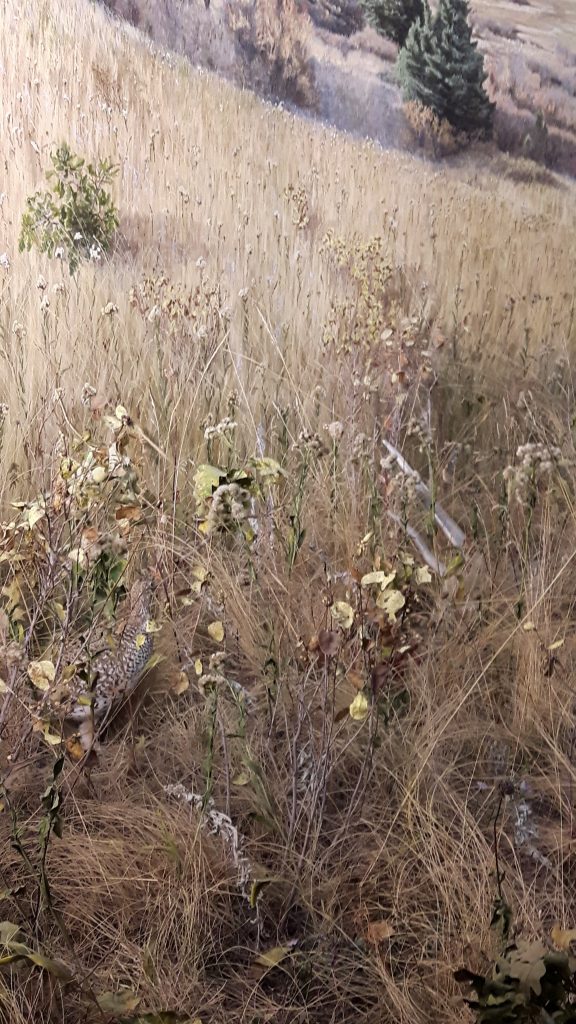