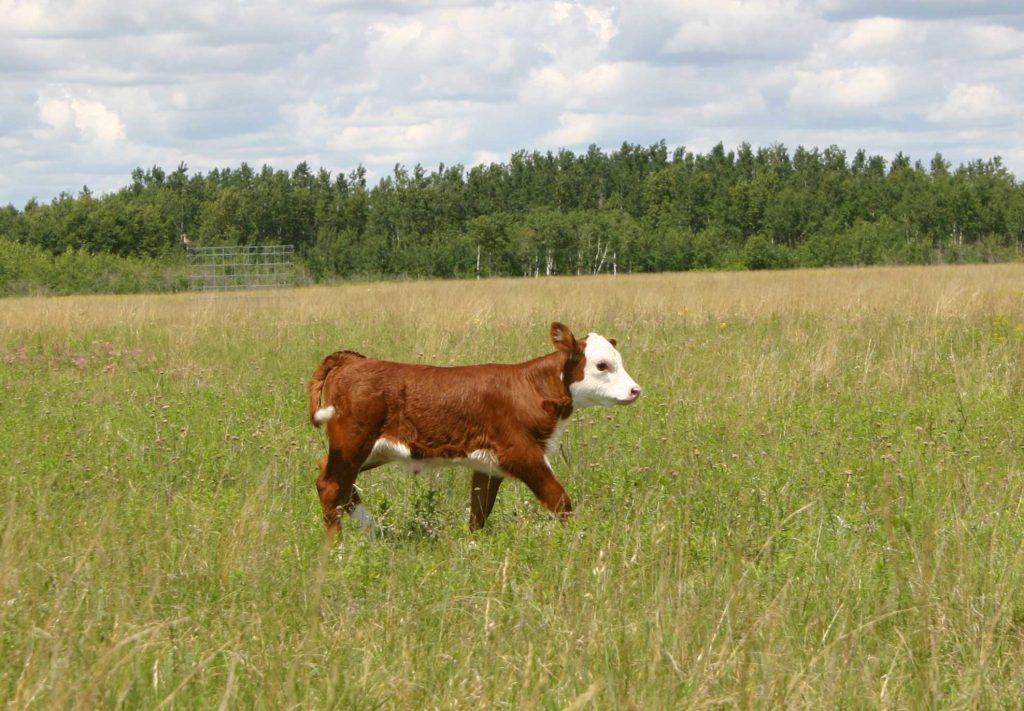 Usually when I do field work I’m by myself. But sometimes I get the feeling that I’m being watched. The main things that have been watching me this year are the cows. The Yellow Quill Prairie Preserve, owned by the Nature Conservancy of Canada, is sustainably grazed by a herd of cows. Aside from using some of my plot stakes as scratching posts and knocking them down, they generally leave me alone and I leave them alone. Sometimes, though, they get a little curious and stare at me with those slightly vacant eyes as if they are expecting me to do something spectacular, and that’s when I start to feel a bit self-conscious. I have no idea what sorts of entertainment a cow would enjoy. Sometimes I moo at them just to see what they’ll do, which is usually nothing. Sometimes they moo back though and then I wonder exactly what was it I said. Where’s Dr. Dolittle when you need him? 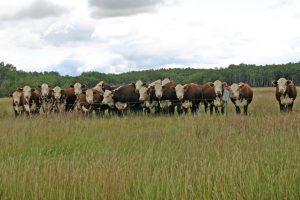 The curious cows at the Yellow Quill Prairie Preserve like to stare at me.

I’ve also been looked over quite thoroughly by the resident Upland Sandpiper. Usually it just chatters at me but last week it flew over a couple times and then landed in the grass and started walking in a circle around my plot for a couple of minutes. It kept peeking out from behind the grass like it thought I was up to no good. Although I would have loved to get a good picture of it, it was just too sneaky and all I got was photo of it as it flew away.

This Upland Sandpiper kept stalking me!

Mammals and birds aren’t the only wary creatures at the preserve. A beautiful Tiger Swallowtail (Papilio glaucus) was there, feeding on the Purple Locoweed (Oxytropis lambertii) but, like most butterflies, it did not want me to take its’ picture. Neither did a Hummingbird Clearwing Moth (Hemaris sp.). Those insects are so fast (like a hummingbird) that they are almost impossible to photograph. I did get one very blurry shot in before I could adjust my camera to “action mode” but by then it was gone. Maybe one day I’ll manage to take a decent photo of one. 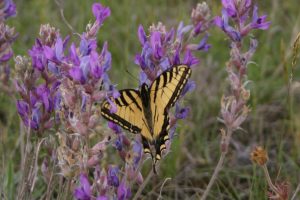 In general, insects that have no form of self-defence, like butterflies and moths, are less apt to let you get anywhere near them. Or maybe they think they’re just too sexy for my camera. The jitteriness of butterflies has likely resulted in a flaw in my field data: I don’t know a lot about what they are feeding on, or how frequently they do so, due to their reluctance to approach me. I try to stay as still as possible, but I suspect that my butterfly and moth observations are low for this reason. Maybe I should start wearing camouflage. 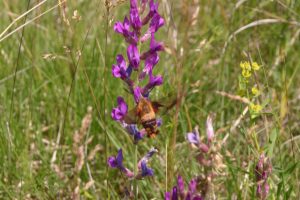 I just managed to snap a blurry picture of this Hummingbird Clearwing Moth (Hemaris sp.) on Purple Locoweed (Oxytropis lambertii) before it zoomed away.

The presence of all these suspicious animals is why my favorite animals on the prairies are the bumblebees (Bombus spp.). Bumblebees are so confident that you are not going to hurt them (due to their stingers) that they’ll let you stick a camera right in their face! As a result I have a plethora of bumblebee images and some really great visitation data. Yeah bumblebees! 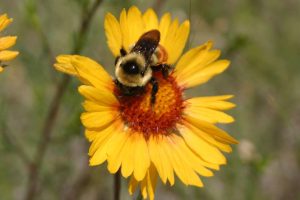 A Bumblebee (Bombus sp.), seen feeding here on a Gaillardia (Gaillardia aristata) flower, is just too busy to care if you take its picture.