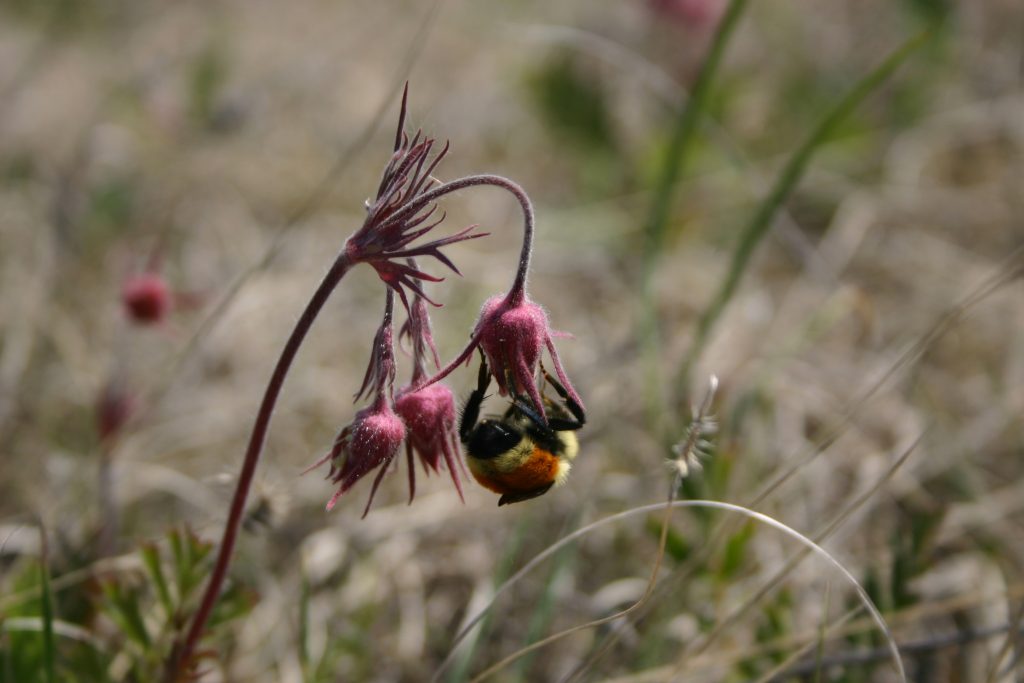 Once again I am studying pollinators at the Nature Conservancy’s Yellow Quill Prairie Preserve (http://www.natureconservancy.ca/en/where-we-work/manitoba/featured-projects/yellow_quill_prairie.html) just south of Canadian Forces Base Shilo. Last year I made the mistake of starting my field surveys too late and missed the blooming of a number of early flowering plants like prairie crocus (Anemone patens), three-flowered avens (Geum triflorum) and chickweed (Cerastium arvense). This year I did my first survey on May 11, which was already almost too late for the crocuses but just in time for the others.

Spring is not the busiest time on the prairies as bee populations are not at their peak yet. However, it is a very important time because the queen bees start feeding. Bee queens are the only ones that survive the winter, going into hibernation in the soil. In spring, the hungry queens begin feeding on both pollen and nectar from the early blooming wildflowers. Once they have fattened up a bit, they select appropriate nesting sites and lay the eggs that will produce the first worker bees. Some queen bees brood their eggs, keeping them warm until they hatch. The workers typically start showing up in June.

My task this May was to find out what the queens were feeding on. Bumblebees (Bombus spp.) were most fond of three-flowered avens with 61% of all visits being to that species followed by chickweed (25%). Andrenid bees (Andrena spp.), on the other hand, preferred the chickweed visiting it 95% of the time. The little sweat bees (Lasioglossum spp.) weren’t terribly abundant yet but only visited the chickweed. In fact, one day it was so windy that I didn’t see any sweat bees at all. If they had ventured out, they would have been incapable of flying without getting completely blown off course as the wind speed was almost 50 km/hour. The few big insects that were out (e.g. bumblebees, clearwing moths) were zooming past me very quickly, if they were going in the direction of the wind that is.

Interestingly, I also saw domesticated honeybees (Apis mellifera), visiting three-flowered avens and chickweed in equal amounts. These honeybees are being kept by one of the nearby farmers and, since there are no crops in flower yet, they were out searching for something to eat. To me, this clearly demonstrates the value of prairie preserves. Although some consider wild prairies to be “waste land” because they aren’t being used to grow crops, they do provide us with benefits: they help pollinating insects survive and reproduce, are a safe place for nesting, and are a source of honey for us to eat.

Happily, except for the strong wind that one day, the weather was great during my surveys: sunny and warm. Hopefully my luck will hold out and I’ll have clear skies for my next field trip in early June.