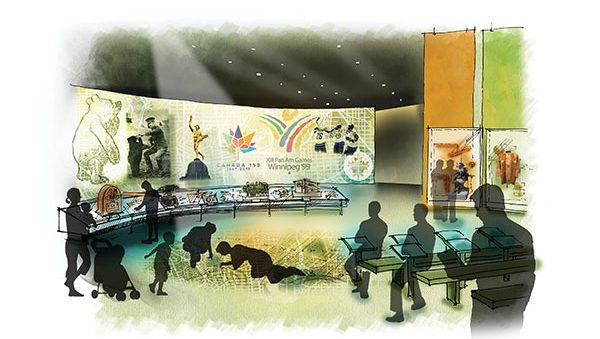 Winnipeg, MB (January 13, 2017):  The Manitoba Museum has selected the Manitoba-based company Bockstael Construction as the general contractor, with AldrichPears Associates (APA), based in Vancouver, as the project lead for the Museum’s Gallery Renewal Project, Bringing Our Stories Forward. The $19 million project will see close to half of the Museum’s galleries undergo staged renewal over three years. Its 2020 end date will coincide with three other landmark anniversaries: the Province of Manitoba’s 150th, the Hudson’s Bay Company’s 350th, and the Manitoba Museum’s 50th.

The Bringing Our Stories Forward project will see the Manitoba Museum’s galleries updated with exciting, contemporary perspectives on Manitoba history. Working in partnership with the community, the project will highlight stories with a strong focus on Indigenous peoples, immigration, first contact and trade, and the connection between people and nature.

The Gallery Renewal Project is unique in that it will refresh exhibits and gallery spaces within the Museum without impacting the exterior of the building. The upgrades will affect 42% of the Museum’s interior spaces including the Orientation, Grasslands and Nonsuch Galleries, and will include the construction of a new Winnipeg Gallery. The project also provides an opportunity to showcase more of the Museum’s 2.8 million artifacts and specimens, including items from the internationally renowned Hudson’s Bay Company Museum Collection.

While the content is driven by the Museum’s curators, the exhibit design process will be lead by AldrichPears Associates (APA), a Vancouver-based firm with an international reputation for award-winning interpretive planning and exhibit design. The firm works with museums, science centers, zoos, and interpretive centers to plan and create compelling visitor experiences that captivate the imagination and inspire lifelong learning.

This is not the first time APA has worked with the Manitoba Museum; the firm helped to create the award-winning, interactive Lake Winnipeg: Shared Solutions exhibition in the Science Gallery in 2013. APA has worked with many other museums across Canada including the Canada Science and Technology Museum in Ottawa, the Gold Rush! El Dorado exhibit at the Royal BC Museum in Victoria, and the Canadian Museum for Human Rights in Winnipeg. International projects include the Falconry and Conservation Gallery at the Zayed National Museum in Abu Dhabi, the Katirvik Cultural Center in Nome, Alaska, the Horno3 Galleries at Museo del Acero in Mexico, the WWII Valor in the Pacific Visitor Centre at the USS Arizona Memorial in Hawaii, and Space and Aviation Galleries for the Bursa Science and Technology Centre in Turkey.

“We know just how important the Bringing Our Stories Forward Renewal Project is to the community and we’re proud to be a part of it.  We can’t wait to help bring the stories in the Manitoba Museum to life in new and exciting ways for future generations,” said Isaac Marshall, Principal, AdlrichPears Associates.

Bringing our Stories Forward is part of a longer-term, three-step project for renewal. Informed by an extensive community consultation process, the $160 million Capital Renewal Vision has been mapped out into three steps. The first phase is the Alloway Hall Expansion and Renewal Project ($5.3 million), which is scheduled to open in the spring of 2017. The second phase includes the Gallery Renewal Project, Bringing Our Stories Forward ($19 million). The third and final phase will see the construction of a stand-alone Science Centre, the creation of a Community Commons, and expanded education, collections and conservation facilities.

As the contract lead, Bockstael is currently working on the first phase of the project, the Alloway Hall Expansion and Renewal. The company has experience in working on similar projects including the Via Rail Winnipeg Union Station Renovation and St. John’s Ravenscourt Senior School and Fitness Centre.

“We’re excited to be working with Bockstael again for the second stage of our Capital Campaign,” said Claudette Leclerc, Manitoba Museum Executive Director and CEO. “We’ve been extremely impressed with their work on Alloway Hall, which will be completed on time and on budget this spring.”

“I have every confidence in the team that has been selected for this project and very excited that we are moving ahead on schedule,” said Jeoff Chipman, Campaign Chair. “The response from the private and public sectors to our Capital & Endowment Campaign has been very positive and I know the community is behind this project. I look forward to knocking on a few more doors to make sure we reach our $19 million fundraising goal to ensure the Manitoba story is updated for its sesquicentennial in 2020.”

“We’re proud to be working with the Manitoba Museum again on such an important project to the community.  Bockstael has been a Manitoba company for 105 years and knows firsthand that this province has amazing stories to be told, and we’re excited to be part of the team to bring these stories to life,” said John Bockstael, President and Chief Executive Officer of Bockstael.