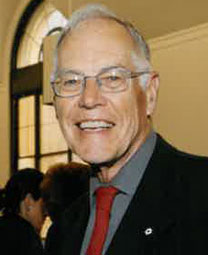 Huband’s relationship with the Museum spanned three productive decades. Through his efforts, long-term security was achieved for the historic assets of the HBC, now in the public domain. He played a crucial role in the transfer of the HBC records and artifacts from Britain, and helped negotiate the permanent gift of the HBC Archives and Museum Collection to Canada. As the Winnipeg area played an important role for the HBC, Huband facilitated the identification of the Manitoba Museum as the perfect institution to house the priceless collection of Company artifacts, so crucial to understanding the history of the fur trade era.

“The Manitoba Museum has been honoured to be named stewards of the HBC’s artifacts, and has embraced the opportunity to preserve and display them for generations, thanks to the work of Rolph Huband,” added Claudette Leclerc, Executive Director and CEO of the Manitoba Museum.

Huband served as Vice President, Secretary and Corporate Counsel of the HBC, and as a member of the Board of Directors of the Hudson’s Bay Company History Foundation. He was also Canada’s National History Society’s Publisher Emeritus and Founding Chair. Husband was named an Honorary Life Member of the Manitoba Museum in 2000 in grateful acknowledgment of his support in securing the future of the HBC Museum Collection. In August 2003, he was appointed to the Order of Canada for his contributions to preserving and promoting the past.

In 2014, Canada’s History interviewed many of the key players who were behind the transfer of the HBC records, including Huband, for the creation of the video below.