Late fall is when a number of interesting Canadian fungi produce mushrooms. Some are edible, some are smelly and some are deadly. It was with great sadness that I read of the recent death of a 3-year old Canadian boy who ate a poisonous mushroom (http://www.cbc.ca/news/canada/british-columbia/death-cap-mushroom-victoria-boy-poisoned-1.3802245). It appears that he ate the most deadly species in the Amanita genus: the Death Cap (Amanita phalloides), shown in the photo above in various stages of development (image from Wikimedia Commons). His unfortunate demise serves as a warning to anyone who is interested in foraging for wild mushrooms: be absolutely, 100% certain of the identity of any wild mushroom before you eat it. For starters, this means investing in some good mushroom field guides and books, and familiarizing yourself with the parts of mushrooms (e.g. cap, gills, veil etc.). Then you need to learn to identify not just the edible mushrooms in your area, but also the deadly ones they could be confused with. When foraging, carefully examine and cut through every mushroom, dig up the base, cut the gills to see if any latex leaks out, and make a spore print (a process that can take a few hours). The North American Mycological Association has good instructions on how to make spore prints (http://www.namyco.org/spore_prints.php), and lists some good books. 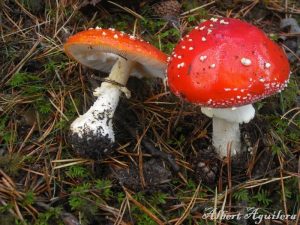 The poisonous Fly Agaric (Amanita muscaria) is brightly coloured but not all poisonous mushrooms are. From Wikimedia Commons.

The fact of the matter is there are no reliable “rules of thumb” when it comes to identifying edible mushrooms. Many people mistakenly think that poisonous mushrooms are brightly coloured like the Fly Agaric (Amanita muscaria) but many Amanitas are white, creamy or brownish. A veil on the stem and scales on the cap, other characters used to identify Amanitas, are not always present. Some mushrooms are edible only when they are young and cooked. However, cooking does NOT destroy all of the toxins in Amanitas. People may assume that poisonous mushrooms will taste bad but the last words of a man who died of Amanita poisoning were reportedly “that was the tastiest mushroom I ever ate”. And you can’t trust squirrels either; they can reportedly eat Amanitas without dying. The fact is, to the untrained, it is easy to confuse an Amanita with a number of edible species such as Button Mushrooms (Agaricus silvicola), certain Milkcaps (such as Lactarius volemus) or Puffballs (Lycoperdon) especially when they are young.

Young Amanita mushrooms may be confused with edible puffballs (Lycoperdon).  Cutting through the center can help you differentiate one from the other.

Amanitas are not the only poisonous mushrooms in North America (although none are as deadly as them). Other potentially poisonous genera include: Clitocybe, Collybia, Galerina , Gyromitra, Inocybe and some Russula and Lactarius species to name a few (see http://www.namyco.org/mushroom_poisoning_syndromes.php). Consuming alcohol with certain normally edible mushrooms (such as Coprinus) can also cause illness. Recent immigrants to Canada should be especially cautious when foraging as species that are poisonous here may look similar to edible species in their homeland. For example, the paddy straw mushroom (Volvariella volvacea) looks very similar to death caps but the former species has pink spores while the latter has white ones. Paddy straw mushrooms are common in southeast Asia but are NOT found in Canada. Making things more complicated, there are a number of Amanita species that grow on other continents (including Africa and Europe) that are edible and could be confused with the poisonous North American ones. 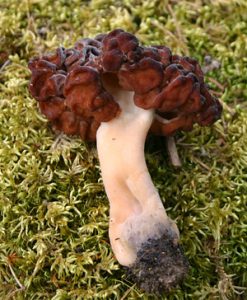 One of the most common edible and prized mushrooms growing right now is the Honey Mushroom (Armillaria mellae). This species is actually a parasite on trees and is often found at the base of tree stumps. However, the similar Shaggy Scalycap (Pholiota squarrosa) grows in the same habitat but is poisonous, more so when consumed with alcohol (although usually not fatally) so pickers beware!

Honey Mushrooms (Armillaria mellae) are among the most popular edible fungi in the province. But beware the impostor… 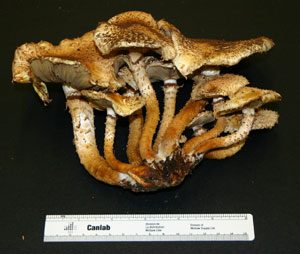 …Shaggy Scalycap (Pholiota squarrosa) which looks similar but is poisonous!

Another interesting inedible species growing right now is the extremely smelly stinkhorn (Phallus impudicus) fungus. A Museum volunteer recently brought me some specimens of this species and it really stunk up the room. Many of my colleagues thought it smelled tasty but I found the slight undercurrent of rotting flesh to be a bit overwhelming.

These stinkhorn fungi (Phallus impudicus) really stunk up my lab!

Mushroom hunting can be a fun and rewarding activity, not to mention tasty. Some people even make their livelihood from collecting certain wild mushrooms, like Morels (Morchella). But it is not an endeavor that should be taken lightly, as a mistake can cost you your life. The only way to safely collect mushrooms is to know how to identify them. Be smart and be safe!