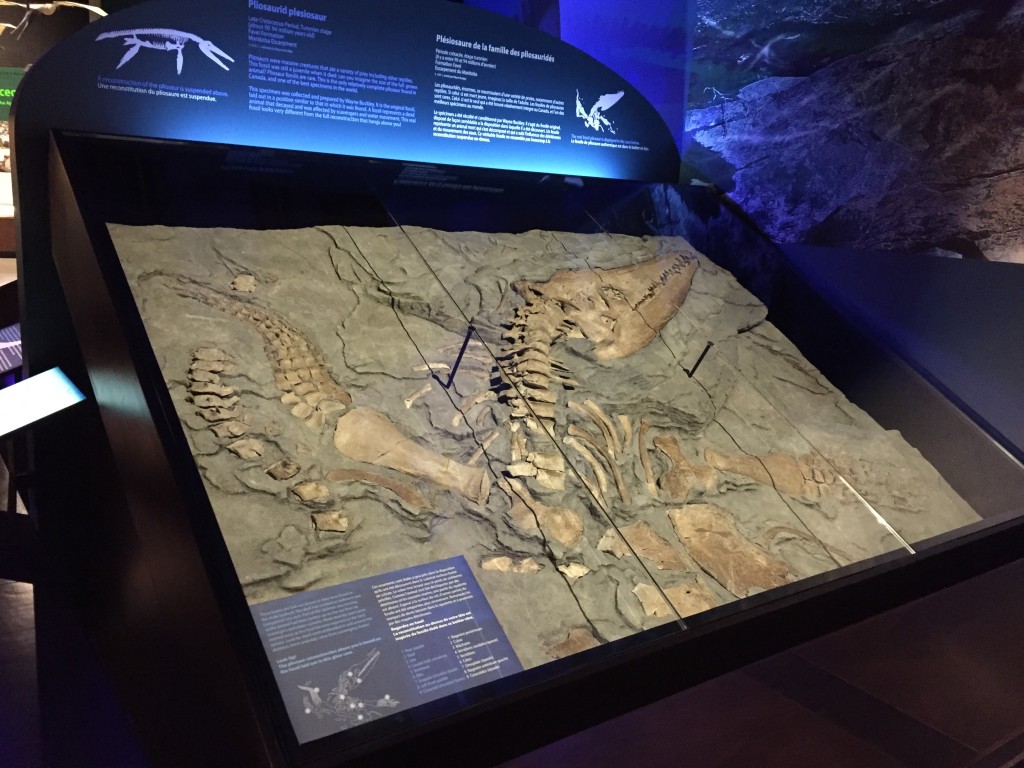 Winnipeg, MB (August 11, 2016):  A 90-million-year-old pliosaur (ply-oh-saur) fossil was revealed today in the Earth History Gallery at the Manitoba Museum.The new addition to the Museum’s fossil family, a large marine reptile, is represented by two skeletons: a display of the actual fossil; and a full skeletal reconstruction. Pliosaurs were a type of plesiosaur (plee-zee-oh-saur), a group of extinct reptiles that were at the top of the food chain in the Cretaceous seas.

“The addition of this world-class pliosaur skeleton is a great way to engage people in the story of Manitoba’s prehistoric past,” said Claudette Leclerc, the Executive Director and CEO of the Manitoba Museum. “To celebrate and educate our visitors about the pliosaur our Dino Dig Discovery Room features a variety of activities including videos describing how the reproduction of the skeleton was created. We also had about 700 entries in our naming contest and the most popular name was… Chomper! Thank you to the all the families who voted, and to all Manitobans – come on down, meet Chomper and see the set of teeth that inspired the name!”

In life, the Manitoba Museum’s pliosaur would have been about 18 feet long (5.5 metres). An examination of the fossils revealed that the creature was still a juvenile and, had it grown to adult size, it might have reached 40 feet (12 metres) or more. The skeletal reconstruction is life-sized and suspended from the ceiling, positioned as it would have been when swimming in the seas of old. Below it, the original fossil is dramatically panel-mounted in a glass-topped case, laid out in a recreation of bedrock as though it has just been discovered.

Fossils from the Cretaceous Period are abundant, but good quality pliosaur fossils are extremely rare. This fossil is so well preserved, shark teeth can still be seen embedded in the smooth bone structure. “This is the only relatively complete pliosaur ever collected in Canada, and one of the best in the world. It is scientifically significant because pliosaurskulls have rarely been found with the body fossils, as they generally became separated during decomposition,” said Dr. Graham Young, Curator of Geology and Paleontology at the Manitoba Museum. Young expects that, “Since we have both the skull and paddles (flippers), this fossil can tell scientists a lot that was previously unknown about pliosaurs. It is being actively studied by scientists from Tokyo’s Gakugei University and the Canadian Museum of Nature, who plan to write a paper about this discovery. Since it is still being studied, it does not yet have a scientific name – it might even be a new species.”

The pliosaur fossil was discovered in 2002 in the Manitoba Escarpment in the western part of the province by agricultural scientist and amateur paleontologist, Dr. Wayne Buckley, and the various components were painstakingly collected between 2002 and 2005. Buckley prepared and documented the fossils in his home workshop before donating them to the Museum in 2014.

“I have a passion for fossils. I think collecting them is important because we don’t have a complete record of the early life in Manitoba during the Cretaceous Period,” said Dr. Buckley. “It’s important to save the fossils; erosion is very rapid where we are collecting and fossils simply erode away.”

The pliosaur is on permanent display in the Earth History Gallery. This Gallery provides an overview of Manitoba’s geological history, which is illustrated with many examples of past environments and life. The pliosaur shares the Cretaceous Seas area with many superb fossils that are also 80 to 90 million years old. Other large reptiles include another plesiosaur belonging to a quite different group, and the skull of Manitoba’s provincial fossil – the mosasaur Tylosaurus pembinensis. These are accompanied by huge fishes, and invertebrates including a spectacular giant clam and a case packed with gorgeous iridescent ammonoids (extinct relatives of squid and pearly nautilus). Other areas of the Gallery show quite different life forms and geological phenomena: beautiful minerals from Manitoba’s Precambrian rocks, the underwater tropics of 450 million years ago depicted in the immersive animated Ancient Seas exhibit, the Ice Age ground sloth, and many other features.

About the Manitoba Museum
The Manitoba Museum is the province’s award-winning heritage and science centre, unique in its combination of human and natural history themes is renowned for its vivid portrayal of Manitoba’s rich and colourful history, Planetarium shows, and Science Gallery exhibits. The Museum features immersive dioramas, multi-dimensional interpretation, science and astronomy education, and quality of school and community programs. The Museum has collected and protects over 2.8 million artifacts and specimens, including the Hudson’s Bay Company Museum Collection of more than 26,100 artifacts and over 222,000 natural history specimens. The Museum’s industry-leading Alloway World Exhibits (AWE) program provides financial support for temporary exhibits, that allow Manitobans to access world-class exhibitions.