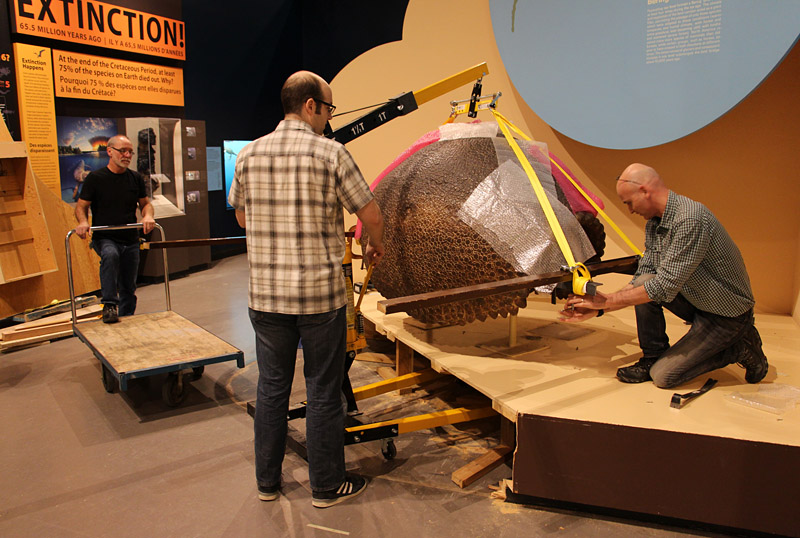 As we have worked our way through the pliosaur exhibit project, we have come up against a series of problems that have required novel solutions. About a month ago we carried out a very strange task, and one that none of us had ever had to do before: we needed to move the glyptodont.

Before I explain how we did this, perhaps I had better backtrack a bit, as you probably have some questions at this point: “What is a glyptodont, anyway? Where did the Museum get its glyptodont and why did you need to move it?” 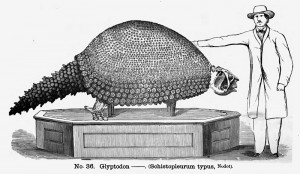 The glyptodont, as featured in Ward’s catalogue from 1866

Glyptodonts were creatures that lived during the Ice Age, that have been described as “fridge-size armadillos,” although the largest ones could perhaps have been called “armadillos the size of Volkswagen Bugs.” They were heavy, armoured creatures that weighed up to two tonnes. They spent their time lumbering around the forests and plains of South America and southern North America,  eating trees and grasses. Glyptodonts became extinct about 10,000 years ago during the “Quaternary Extinction Event,” at about the same time as giant ground sloths and other large mammals, probably as a result of climate change and hunting by humans.

Our particular glyptodont is a replica of a fossil that belonged to the genus Glyptodon, and like our ground sloth it came to the Museum by a long and circuitous route. The glyptodont and the ground sloth were among the earliest casts of big vertebrate fossils, produced during the late 19th century by Ward’s Natural Science Establishment in Rochester, New York. Our ground sloth (Megatherium) was supplied to the Redpath Museum in Montreal in time for the opening of that institution in 1882, while the glyptodont joined it in Montreal some years later. 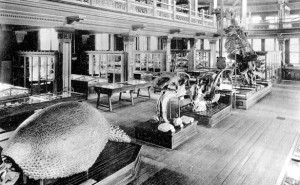 The Redpath Museum in 1925, showing both the glyptodont (left) and the ground sloth (right). (photo: McCord Museum)

By the 1960s, the Redpath was renovating, and these immense casts were removed and needed a home. The Manitoba Museum was under construction, so the casts were transferred to us and shipped to Winnipeg. They were assembled when the Earth History Gallery was constructed, and were there in time for the gallery opening in 1973. For the forty-plus years since then, both of these huge and historic casts have stood in place on the platforms that had been constructed for them. 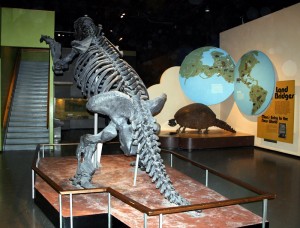 The ground sloth and glyptodont, in their positions in the Earth History Gallery from 1973 to 2016

Now, in 2016, we are renovating that part of the gallery so that we can install our exciting fossil pliosaur, and to make space we have had to move the glyptodont. Since this replica had been in place since long before any of us worked here, we did not have any advance knowledge of how it should be handled, and since it is an irreplaceable artefact dating from  over a century ago, we considered this move with some trepidation. Since it turned out that the glyptodont is also immensely heavy, having been constructed of plaster, wood, and iron in the best 19th century fashion, our trepidation was well placed. 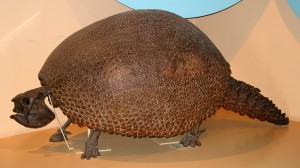 As has been the case with handling the plesiosaur specimen, our technical staff love this sort of challenge, and Bert Valentin and Sean Workman had come up with solutions in the best “jury rigged” manner. Back when we installed our mineral exhibit, Bert had modified an engine hoist so that we could move our giant amethyst specimen, which weighs close to half a tonne. Now, with a fossil cast that weighs about the same amount (we weren’t able to weigh it, so this is a best guess), Bert re-modified that hoist as a glyptodont-lifter. The following sequence of photographs shows how it went – the process was much more nerve-wracking than it appears here! 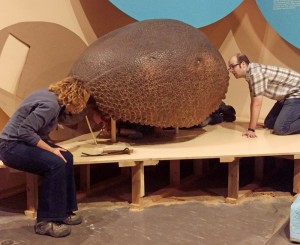 Bert Valentin crawls under the glyptodont to saw the head off, while Janis Klapecki and Sean Workman assist. The head will be taken out for conservation work, while we move the glyptodont’s carapace. 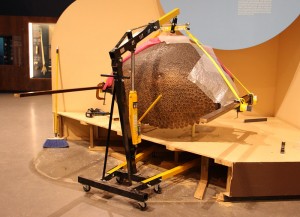 The engine hoist is placed over the glyptodont, which is attached by thick straps attached to steel beams. The long pieces of wooden rail will allow us to control the tipping of the carapace when it is unbolted from the platform. 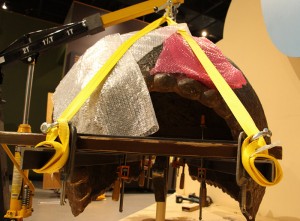 An end-on view shows how the steel beams are passed under and through the glyptodont. 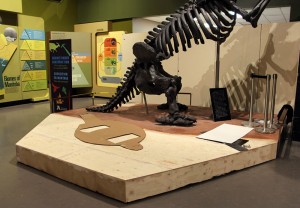 Marc Hebert had built this extension to the ground sloth’s platform. A cardboard cutout shows the location to which we will move the glyptodont. 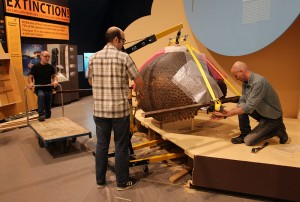 Before Sean can begin to hoist the replica, Bert adjusts the attachments. 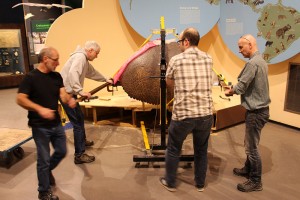 It is lifted, and the scary part of the operation begins! 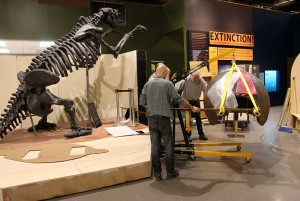 Sean rolls the hoist, while Bert and I use the rails to keep the carapace steady. 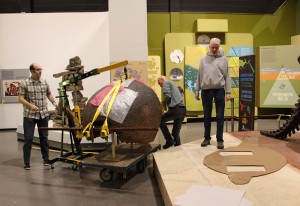 Contemplating just how we are going to swing that heavy fragile antique up onto the platform . . . 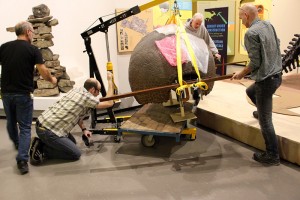 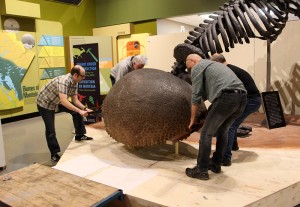 Traditional muscle power is used to slide the glyptodont to its final location. 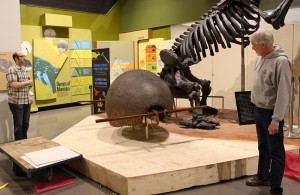 The replica is now attached in place, ready for the rest of the exhibit to be completed around it.