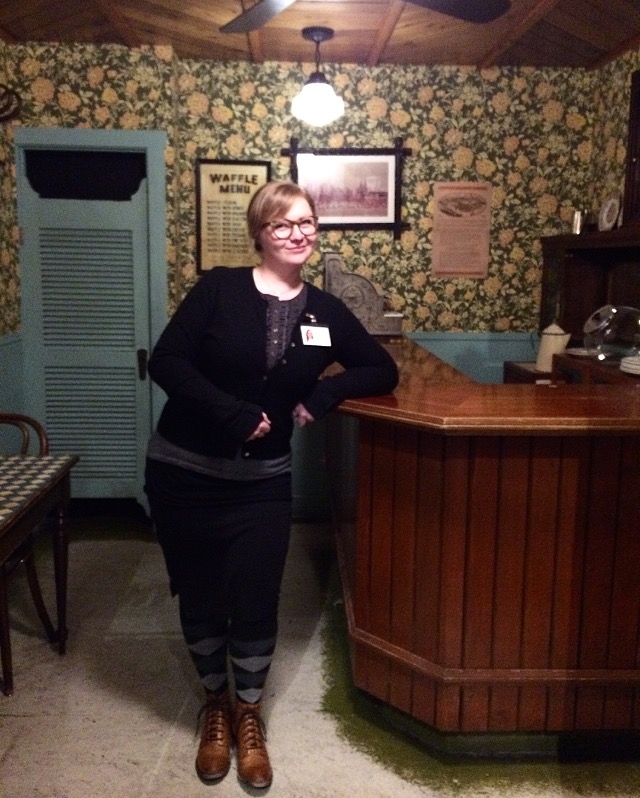 Master’s student Jessica Adam in the Urban Gallery café. The gallery represents Winnipeg in 1920, one year after the events of the General Strike.

In 2019, it will be the one hundredth anniversary of the Winnipeg General Strike, a movement that had major social and political repercussions across Canada. To commemorate this dramatic episode in Winnipeg’s history, The Manitoba Museum is researching a potential exhibition about the strike, and specifically, the experience of what it was like to be there – on the streets, in the crowds, part of the events. My role in this, as a student researcher working towards my MA in Curatorial Practices, has focused on first-hand accounts, archival photographs and materials from the Archives of Manitoba, as well as The Manitoba Museum’s collection of recorded oral histories. The recollections of people who personally witnessed these events add an extra dimension to the colourful history of Winnipeg, as they create a tangible link to the past. As I have worked my way through this research, I have become acutely aware of how connected we are to the past, overall. In many ways, this is part of what museums do –facilitate this connection for everyone through exhibitions and education.

Researching and listening to oral histories, especially, has furthered my appreciation for Winnipeg’s local history, and placed it into the larger context of Canadian history. The importance of these kinds of historical accounts, as well, cannot be overstated. They are exciting, original, and engaging, and they can make us feel like we are sharing the experience of being there, as it’s all happening. This kind of primary source research can be slow and time-consuming, but is well worth it. I’ve heard stories I never thought I’d get to hear, read sensational accounts, and admired amazing pictures taken during incredibly important moments. As a history nerd, I feel like this has been a bit of a dream come true.

Finally, I’ll end with an example. While there are many compelling stories in The Manitoba Museum’s oral history collection, I found Mr. Leslie Paulley’s description of the infamous Bloody Saturday very thrilling. In this brief segment, he discusses the violence that erupted on the streets of Winnipeg between the strikers and the Mounted Police:

They turned around and they recharged the crowd, this time with revolvers drawn. Previously, as I recall, they were only swinging batons. They swept down upon the crowd, and as they approached the gathering in front of the City Hall, they fired shots at it. One man dropped dead with a bullet through the heart on William Avenue, quite close to Main Street. Another man was shot through the head. And a third man died later in hospital of wounds to the chest. There were scores of people injured, some of them, of course, being the mounted men engaged in the charge.(Paulley, Leslie 110 – 38:45-39:34)