The Amazing Criddles – Part 1: The Family 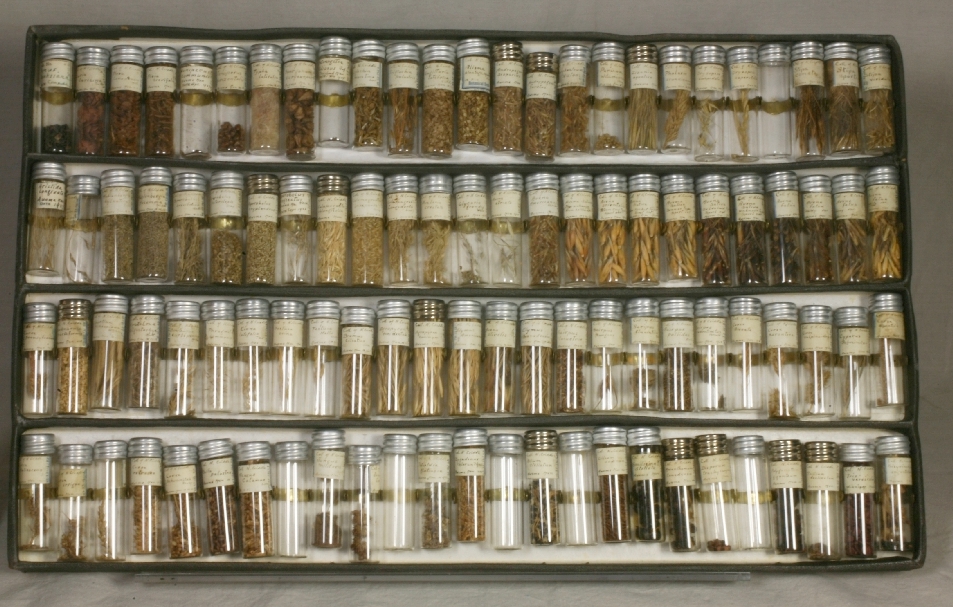 Within the History Collection at The Manitoba Museum, we have sub-collections of artefacts, tied together by object type (like our collection of crocks) or social movement (like our fraternal orders material). One of our significant collections comes from a homesteading family whose breadth of material culture has caused my coworkers and I to ask on more than one occasion, “did the Criddles ever throw anything away?!”

In 1882, an Englishman and his family immigrated from Addlestone, Surrey, UK to a patch of sandy land east of Brandon, Manitoba to try his hand at farming. Unlike typical homesteaders of his day, Percy Criddle was the son of aristocrats, schooled in medicine and music at Heidelberg. He fancied himself a renaissance man, dabbling in sport, astronomy, law, medicine and music, hosting weekend parties and maintaining a detailed meteorological record from 1884 until his death (and then perpetuated by his children until they abandoned the homestead in 1960). The most compelling peculiarity, however, is his family. Percy met Elise Harrer while he was studying in Germany; the two never married, but Elise moved to London after Percy returned to the UK and they proceeded to have six children –one of whom died in infancy. Shortly after Elise became pregnant with their last child, Percy married an Englishwoman named Alice Nicol. Alice gave birth to four children in the UK and another four at Aweme, their Manitoban homestead. After moving to Canada, both women (with Elise now using the surname “Vane”) lived under the same roof and the children were raised together, although their understanding or acknowledgement of their relationships has been the subject of debate.

From the meteorological record, visitors’ register and diaries to scientific catalogues and photographs, the Criddles were a well-documented family. The documentation pales in comparison to the material culture accumulated and preserved by the family from 1882 onward. Percy details purchases and acquisitions in his diary, noting their prices and sources and writes about his opinions on objects like his new telescope or organ. He also talks about items produced by the family; building blocks Percy made for the children or the house flag sewn by Alice. Percy and the family were regularly visited by an old friend, J.A. Tulk, who travelled from Surrey to Aweme on an annual basis, lugging all sorts of medicines, scientific instruments, books and other gifts for the Criddle-Vane family.

109 years after the Criddles arrived in Manitoba, a handful of Percy’s grandchildren donated the bulk of
their grandparents’, aunts’, uncles’ and parents’ belongings to The Manitoba Museum –a whopping 3481 artefacts and 302 specimens! Over the past six months, the majority of my time has been dedicated to completing the cataloguing of this collection. Hundreds of Criddle artefacts have passed through my hands and I count myself lucky to have access to these amazing items. Here are a few of the most memorable artefacts I catalogued from the Criddle Collection: 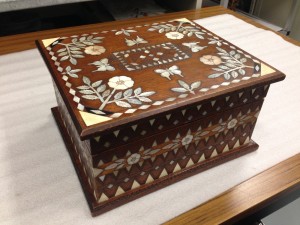 1. Storage Box made by Stuart Criddle in 1903. This box, decorated with mother of pearl inlay, is one of many inlaid pieces created by the Criddle sons on winter evenings at Aweme. Lined with lush blue velvet, the box has an internal locking mechanism that is released by pressing a small piece of inlay located near one of the hinges. It took a lot of fiddling to discover exactly how it opened, so I noted the specifics in the catalogue record for future reference. The question remains…what was Stuart hiding in there? 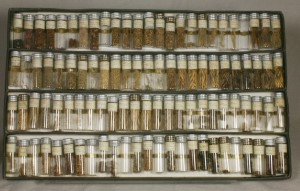 2. Seed Samples collected by Norman Criddle between 1906-1933. Mainly known for his work in entomology, Norman Criddle was appointed the Manitoba provincial entomologist in 1919 and ran an entomology lab at Aweme. However, like his father, Norman had a range of interests, so it comes as no surprise that he was also a renowned watercolourist, his delicate illustrations of local flora gracing the pages of agricultural books like “Fodder and Pasture Plants” and “Farm Weeds of Canada”. During the second half of his life, Norman developed a collection of seeds totalling nearly 700 samples sourced primarily from Aweme and the surrounding area. Each sample was stored in a vial and all the relevant information was scrawled by Norman on tiny labels adhered to the vials. Deciphering what I refer to as “historical handwriting” is an arduous task and my colleagues started asking “Still working on the seeds?” I would shoot daggers from my eyes. 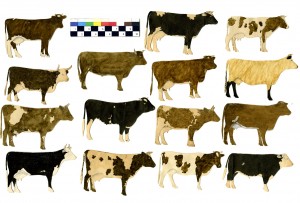 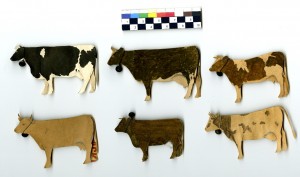 3. 129 Homemade cut-outs of Animals, including cows, bulls, horses, and dogs, made by Alma Criddle, circa 1909. According to Criddle-de-diddle-ensis: A biographical history of the Criddles of Aweme, “the cows were such favorites that [Alma] made paper replicas of them, instead of the usual “paper dolls” of childhood.” She cut out animal bodies from scraps of paper and used watercolours to tint the animals, replicating their unique looks. In the case of the cattle, Alma wrote the name of each animal near its belly, including bulls Carrot, Rhubarb and Radish and cows Rice, Nectar, Sylvia, Myrtle, White Rose and Pansy. I seriously had a huge smile on my face the entire time I worked on these paper animals. 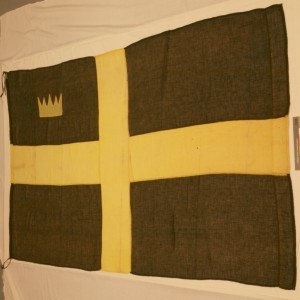 4. The St. Albans house flag was made by Alice Criddle in 1888. St. Albans was the title Percy assigned to the family home at Aweme, in the tradition of great English houses. Why he chose the name is never explained in his diaries, although his granddaughter speculates at length why he may have selected St. Albans in her book “Criddle-de-Diddle-Ensis”. The flag is well preserved and I love that it lends to Percy’s established reputation as an eccentric.

Now that the work is complete, I find myself feeling a mix of relief and longing –I’ll miss this peculiar homesteading family but other collections beckon. Stay tuned!
-Cortney Pachet, Cataloguer