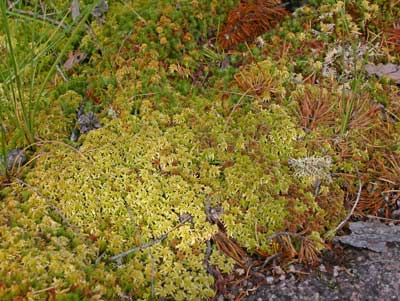 In a previous blog, Manitoba’s Miniature Forests (http://manitobamuseum.ca/manitobas-miniature-forests/), I described a field trip I took to obtain specimens of moss for the Museum’s collection. Today an exhibit featuring some of these moss specimens opened in the foyer of the Museum. I was grateful that Dr. Richard Caners with the Royal Alberta Museum was able to help identify these plants  as mosses are not my main area of expertise. 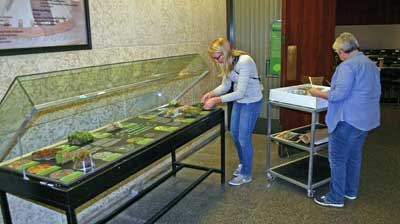 Museum Conservators Carolyn and Ellen helped with the set up of the moss exhibit.

Mosses are fascinating to look at with many varied forms. In fact, it’s amazing that such tiny plants can look so different. This exhibit will give visitors an opportunity to look at these organisms up close. Important features to look for are the stalked sporophytes, the reproductive parts of the mosses. 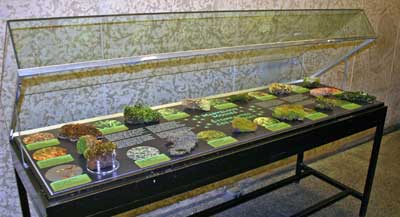 The life cycle of mosses is quite different from that of flowering plants and people. If humans reproduced like mosses, our babies would grow out of our heads! Flowers and people normally have two sets of gene-containing chromosomes. Within our sex organs, cells with only half of these chromosomes are produced, namely eggs and sperm. This occurs so that when an egg and sperm unite, there will be just two sets of chromosomes (not four), one from each parent. But in mosses things work a little bit differently. 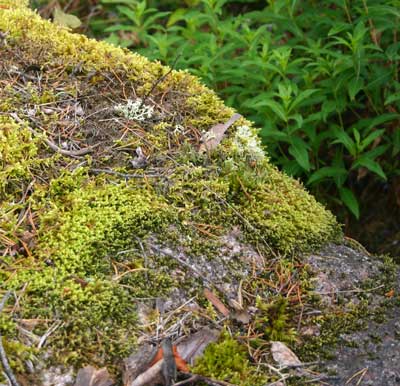 It’s not dead! It’s just resting! Dried up mosses, like the ones on this rock, cease to be biologically active during hot, dry periods.

Mosses are like the amphibians of the plant world: they still need water to reproduce. The main part of the moss, the leafy green part, has only one set of chromosomes. During a wet time of the year, often spring, these plants produce eggs and sperm by straight cell division at the tips of their stems. The sperm are released and have to swim through water to reach the eggs. Once a sperm reaches an egg and fertilizes it, a tiny structure starts to grow from the tip of stem: a sporophyte with two sets of chromosomes. The sporophyte eventually produces spores with only one set of chromosomes. Once released, the tiny spores germinate and go on to produce the little plants we all know so well. Finished with its job of making babies and unable to photosynthesize, the sporophyte simply withers and falls off.

So come on down to the Museum to check out these marvellous little plants. They are available for the general public to view for free in the Museum’s foyer until April of 2016.