41 uses for a dead plant

Does anyone remember the book “101 Uses for a Dead Cat” that came out in the 1980’s? I know, I know animal rights activists accused the cartoonist of encouraging cruelty to animals but I can’t imagine that anyone took it seriously. I mean who would ever turn a dead cat into a pencil sharpener or a pair of roller blades? 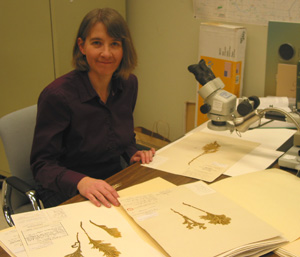 Studying, organizing and expanding the Museum's collection of dead plants is part of my job.

Anyway, it turns out that dead plants are even more useful than dead cats. In fact, next week I will be attending a conference called “Biodiversity 2010 and Beyond” in which the participants will be spending five whole days extolling the virtues of dead plants. Although everyone that I am sure to meet at this conference will be familiar with the multitude of uses for dead plants, most people almost certainly don’t. In fact, a recent survey of our visitors revealed that very few people even know that The Manitoba Museum has a collection of dead, dried plants and fungus (called a herbarium) up in the tower.

So in the interest of education, here’s my own take on the what-to-do-with-a-dead-something theme, with the goal of letting everyone know some of the things that dead plants at The Manitoba Museum, and at other Museums and Universities, are really used for.

1. Documenting the existence of new species. All new species must have a type specimen (=a dead plant) designated at the time of publication and preserved in a Museum or University for all time. 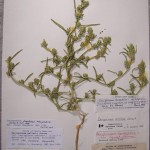 This is a type specimen of a new species of bugseed from the Canadian Museum of Nature.

2. Documenting the validity of ecological research. Without voucher specimens, scientific research is not publishable because there is no way of proving that the observations were really made.
3. Determining the population sizes and rarity status of species. Endangered species lists around the world are prepared by studying Museum collections.
4. Creating status reports and conservation plans for endangered species.
5. Documenting changes in the climate by comparing flowering dates and changes in distribution over time.
6. Documenting the spread and alternate hosts of plant diseases.
7. Documenting changes in air quality over time; lichens will die if air quality is bad.
8. Aiding in the production of Environmental Impact Assessments for development projects.
9. Acting as a storehouse of DNA for projects such as the DNA barcoding project at the University of Guelph.
10. Providing DNA for crop breeding. 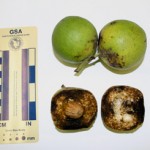 DNA from herbarium specimens, like these walnuts can be used for crop breeding.

11. Documenting the ecological relationships between plants, animals and fungi.
12. Documenting changes in ecosystems over time (i.e. sand dune stabilization rates).
13. Documenting the location of illegal marijuana and poppy fields.
14. Documenting the mutations that occur when native plants are bombarded with gamma radiation (we have an entire collection of mutant plants from the Whiteshell Nuclear Research Establishment stored here).
15. Determining the authenticity of wooden artifacts (e.g. did this wooden necklace really come from a lost tribe in New Guinea? Not if it’s made of Bur Oak!).
16. Documenting the spread of illegal aliens (i.e. plants that are alien to Canada and potentially threaten our agricultural production and native ecosystems).
17. Aiding in the instruction of students.
18. Helping people identify plants and fungi that are edible.
19. Determining the food requirements of wild animals. I used the Museum’s collection to identify the seeds found in food caches of Ord’s Kangaroo Rats (an endangered rodent found on sand dunes in Saskatchewan and Alberta).
20. Aiding in the identification of potentially poisonous plants and fungi. 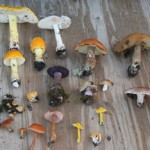 Dead mushrooms stored in a Museum can be used to identify edible and poisonous ones.

21. Indicating water quality. The presence of certain plants indicates salinity in the groundwater.
22. Documenting the kinds of plants that were used by ancient peoples and how they were used. I’ve had to identify fossilized seeds found in clay pots during the Museum’s archaeological digs.
23. Determining which wild plants are ancestral to our modern cultivars.
24. Helping scientists identify plants that may produce useful chemicals for modern medicine and other industrial applications.
25. Determining the distribution of species.
26. Determining the habitat requirement of species (this is useful information for reclamation scientists).
27. Indicating the location of certain metals such as nickel.
28. Acting as a reference collection for the identification of species.
29. Documenting the variability in appearance of plants due to habitat differences or mutations.
30. Determining how species are related to each other (=systematics).
31. Determining the genetic structure of a species.
32. Determining the normal fire cycles of forests.
33. Reconstructing past environments (using tree and lichen rings).
34. Determining the level of genetic contamination from genetically modified organisms. 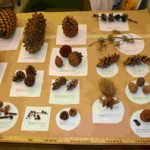 These cones were displayed in the Museum's "Travelling Plants" exhibit.

And lastly,
41. Providing future citizens of the world with the opportunity to study and utilize these specimens for whatever their future needs may be. 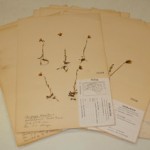 These specimens were collected over a century ago and can help us detect climate changes.

When the great British explorer William Dampier began collecting plants back in the late 1600’s he had no idea that his specimens would be used for the purposes that I have just listed. I am humbled to think that the specimens that I collect will someday be used in marvellous and completely inconceivable ways to help our species’ collective descendants solve some of the problems they will inevitably be faced with.