World War One: In the Trenches (Part Two of Three)

The Manitoba Museum is currently hosting “The Victoria Crosses of Valour Road”, a new exhibit in our foyer in which all three of the famous Victoria Crosses presented to WWI military servicemen Hall, Clark and Shankland are on display for the public. To put this exhibit of such important artefacts into a larger perspective I am providing three blog entries about the war’s beginnings, drastic developments, and the effects of the war after it ended in 1918.  This entry, Part II, explores the effects of industrialization on the war, Canada’s role, and some of the massive geo-political and combat developments that took place during the war. 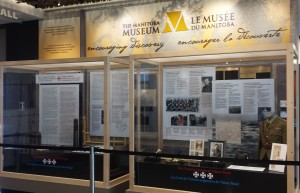 Victoria Crosses of Valour Road Exhibit in the foyer at The Manitoba Museum.

A New Kind of War

The Great War quickly intensified and within a month it became obvious that the mounting casualties were unprecedented. This was partly due to industrial technology. Extensive railway systems allowed a constant supply of food and men, even through winter months; rapid-fire machine guns caused massive loss of life; barbed wire (invented in the 1860s) slowed attacks; poison gas, used by both sides, terrified the enemy and killed thousands; heavy artillery shells were produced and fired by the millions; tanks were introduced; mines were used to blow up trenches from beneath; flamethrowers induced panic; grenades were used to clear trenches, but also caused many accidents; aeroplanes and blimps proved invaluable for reconnaissance; destroyers and sub-marines armed with torpedoes were used in the open seas. At the same time horses, swords, bayonets and trench clubs were reminiscent of an earlier period of war. What most characterized the conflict, however, were the vast trench systems that became like cities to the men involved. Trenches were so important because defending was much more successful than attacking. Defending from a trench with machine guns was extremely effective against a group of men with rifles running across an open field and then trying to wade through barbed wire. While the forward “creeping barrage” of artillery was meant to dislodge trench defenders and protect advancing forces, it was even more effective at creating a landscape of mucky craters that slowed things down even more.

This was an incredibly dangerous environment for individuals like Hall, Clarke and Shankland. In the first month of the war 75,000 French soldiers were killed – 27,000 of these on August 22 alone. In one battle at the end of August their allies the Russians suffered 50,000 casualties and 92,000 of their men were captured. Armies adapted to the slaughter by entrenching themselves in defensive positions. However, by 1917 the “creeping barrage” had been perfected, often moving forward only 300 yards ahead of advancing forces. Also, new independent attack teams had been organized that cleared enemy machine gunners more effectively. But casualties continued to grow. During the four-day battle for Vimy Ridge in 1917, Canadians experienced 10,000 casualties (including over 3,500 dead), with the Germans suffering perhaps 20,000 casualties as they defended and then retreated. It is difficult to imagine the sheer number of families back home that experienced profound loss during WWI.

While aeroplanes and artillery shells flew through the sky, trench warfare could be as simple and brutal as hand-to-hand combat. This oak “trench club”, fitted with hobnails and weighted with a lead core, was used against the enemy once trenches were overrun. H10-1-84. Copyright The Manitoba Museum.

Canada became involved on August 5, 1914, the day after the United Kingdom declared war, and eventually over 600,000 Canadians volunteered, of which 458,000 were sent abroad, with about 61,000 killed in the war. Among British Empire colonies, only India provided more volunteers (1,440,000).

Over 18,000 Manitobans volunteered for the war effort, spurred on by patriotism and in many cases lack of work in a province that was beginning to experience an economic downturn. Camp Hughes became a major training ground for Canada’s army, including the construction and use of trenches (which can still be seen today). Manitobans were involved in many of the major Canadian battles in Europe, including Ypres and Vimy Ridge.

The battle for Vimy Ridge was symbolic for Canadians because for the first time all four Canadian divisions fought together and were immensely successful. However, it should be remembered that this was one flank in a much larger operation at Arras that eventually cost the British 150,000 soldiers, compared to the defending German losses of 100,000.  Arras, in turn, was used to support the major attack by the Allies at Chemin des Dames, which stalled and ended in mutiny. In a recent 729-page history of WWI, Vimy Ridge receives mention in one sentence and doesn’t even show up in the index (David Stevenson 2012, “1914-1918”). As important as Canadian battles were to Canadians, their contributions were dwarfed by the giant scale of the war itself.

The war was particularly devastating for Czar Nicholas’ Russia, with the number of war dead reaching over 1,800,000, a staggering number, and twice that of the entire British Empire. By 1917 Russians had lost faith in their leadership, soldiers had lost faith in their commanders, and the economy was collapsing. The people of Russia wanted peace and bread. This opened the way for new leaders such as Lenin, who helped usher in the Communist Revolution. This event would affect world history to the present day, as the establishment of the Soviet Union, the Eastern Bloc, the Berlin Wall and the Cold War led to a nuclear arms race and Communist movements all over the world (including in China). The collapse of the USSR continues to have consequences to this day.

What finally tipped the balance in favour of the French and British was the turmoil within Germany combined with the late involvement of the United States of America on the side of the Allies. The USA entered the war on April 6, 1917, almost 3 years after Canada. The new troops, supplies and funding were crucial to the Allies partially because they helped to replace an exhausted Russia. As American support continued to grow over the next year, Germany attempted one last massive offensive in the summer of 1918…which failed.

Even during the war it was obvious that the world would never be the same. Economies were collapsing and political uprisings surfaced in many nations. Too many husbands and brothers and sons were missing or forever maimed. And yet, when the war did end, the borders of Germany, France and Great Britain survived in largely the same manner as before. Which would later raise the question: What did ten million soldiers die for?

Coming up in Part III: How the war ended and what it accomplished.