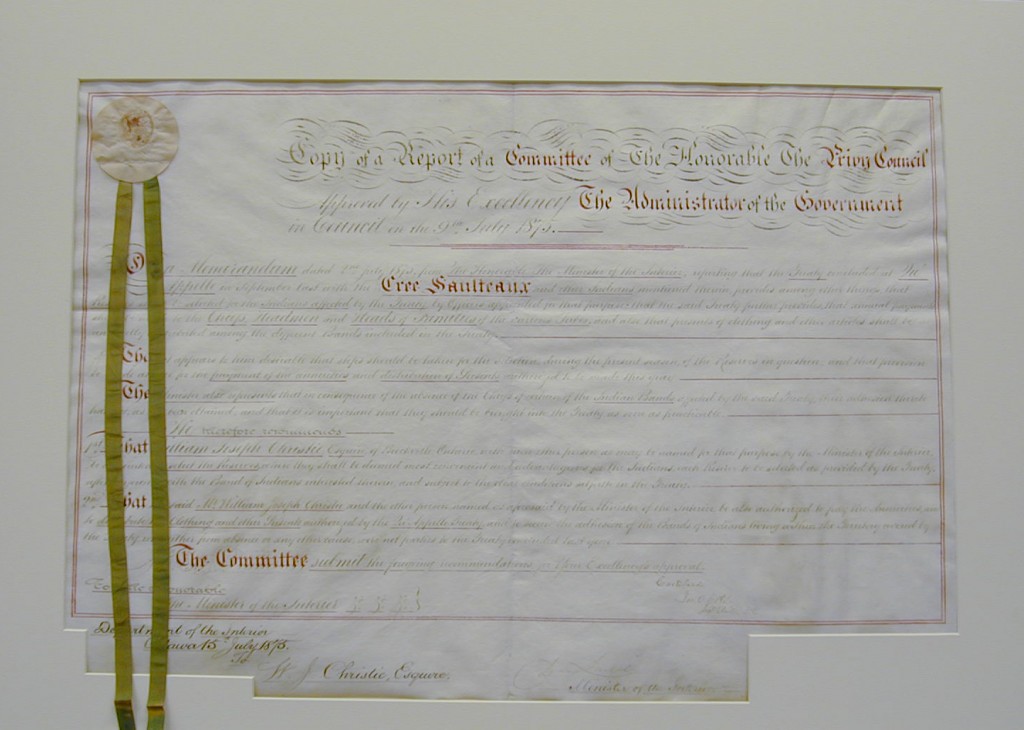 This is an image of an original 1875 handwritten parchment document related to  the signing of Treaty No. 4., the “Qu’appelle Treaty”, temporarily on display at the museum as part the “We are All Treaty People Exhibit”.  Treaty No. 4 was originally concluded at Fort Qu’Appelle in 1874 but many Anishinaabe and Cree Chiefs were absent at the time.  This fragile document sets out instructions for Treaty Commissioner William Christie to return to Fort Qu’Appelle in the summer of 1875 and ” secure the adhesion” of the remaining Chiefs.

Among those Chiefs was Piapot, one of the most famous and powerful leaders of the Plains Cree.  He wanted a reserve for his people in the Cypress Hills region of what is now South-Western Saskatchewan.   Christie misled Piapot about the terms of the Treaty, and Piapot’s band were forced to settle more than two hundred and eighty miles to the east.  This document initiated a train of events which led to a decades long enmity between Canadian officials and the Plains Cree of Piapot’s band. 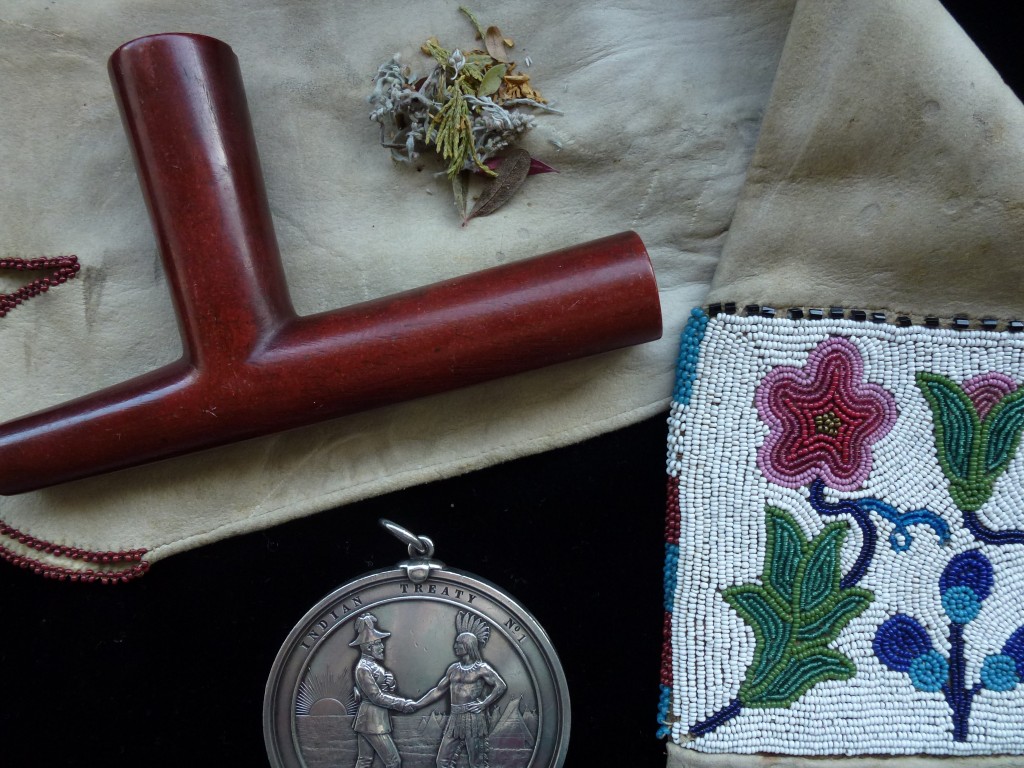 Also featured in the “We are All Treaty People” exhibit is a peace pipe formerly owned by Piapot.  The pipe was a gift of thanks to a minister who conducted the marriage of Piapot’s daughter.

The text of the document follows:

Approved by His Excellency The Administrator of the Government in Council on the 9th of July 1875.

A Memorandum dated 2nd of July, 1875, from, The Honourable the Minister of the Interior,  respecting the Treaty concluded at Qu’Appelle in September last with the Cree, Saulteaux and other Indians mentioned therein, provides among other things, that reserves be selected for the Indians affected by the Treaty by Officers appointed for that purpose; that the said Treaty further provides , that annual payments should be made to the Chiefs, Headmen and Heads of Families of the various Tribes , and also that presents of clothing and other articles shall be annually distributed among the different Bands included in the Treaty.

That it appears to him desirable that steps should be taken for the selection during the present season, of the Reserves in question and that for provision to be made at once for the payment of the annuities and distribution of Presents  authorized to be distributed this year

The Minister also represents that in consequence  of the absence of the Chiefs of certain of the Indian Bands affected by the said Treaty, their adhesion thereto has not as yet been obtained and thus it is important that they be brought into the Treaty as soon as practicable.

That William Joseph Christie, Esquire of Brockville, Ontario with the assistance of persons as may be named for the purpose by the Minister of the Interior be appointed to select the Reserves where they shall be determined most convenient and advantageous for the Indians , each reserve to be selected as provided by the Treaty after conference with the Band of Indians interested therein and subject to the conditions set forth in the Treaty.

That the said, Mr. William Joseph Christie and the other person named as aforesaid by the Minister of the Interior to be authorized to pay the annuities and to distribute Clothing and other Presents authorized by the Qu’Appelle Treaty  and secure the adhesion of the Bands of Indians living within the territory covered by the Treaty and who either from absence or any other cause, were not parties to the Treaty concluded last year.

The Committee submit the foregoing recommendation for your excellency’s approval.

The Minister of the Interior Etc, etc, etc } 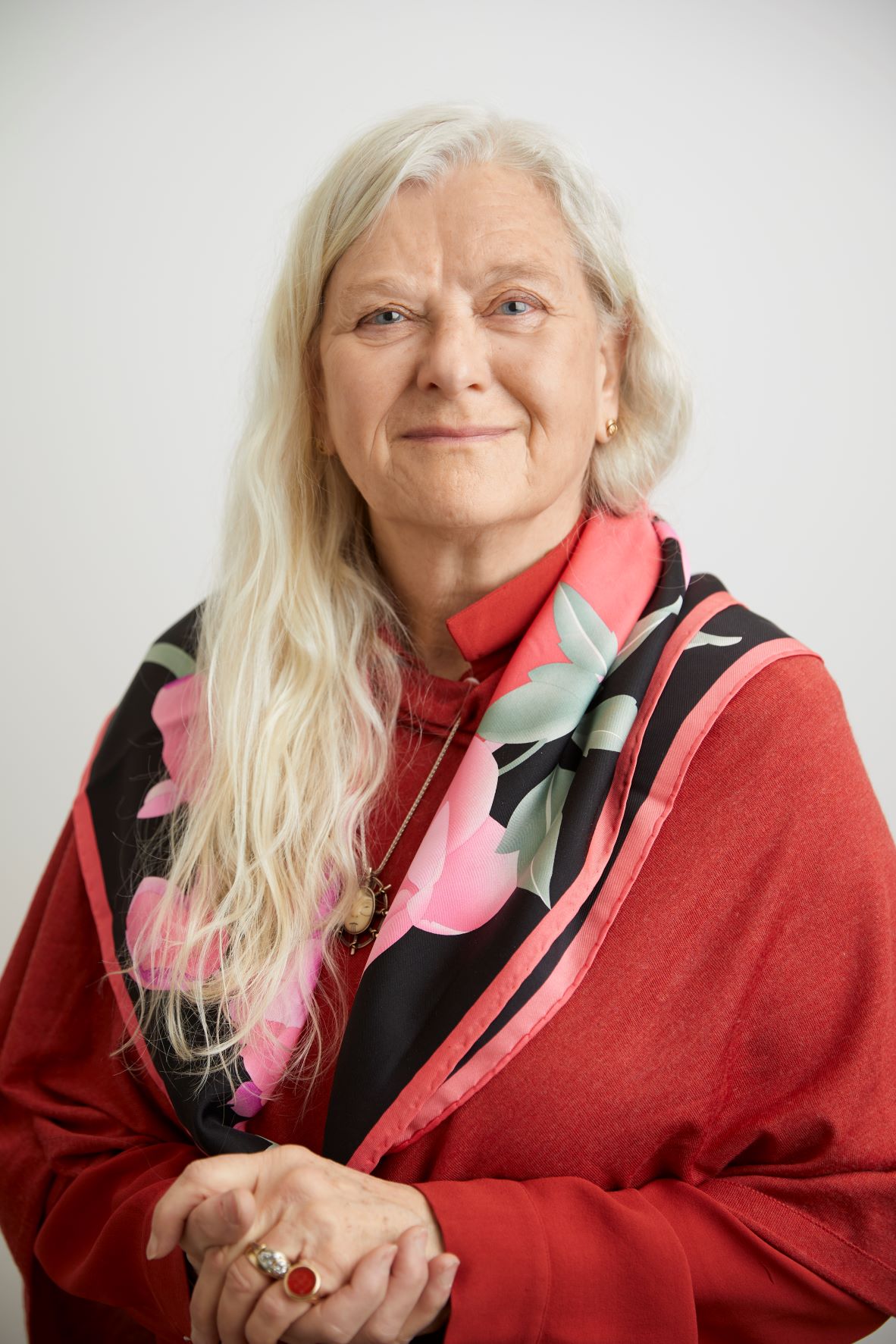