Isn’t it iconic? Don’t you think? 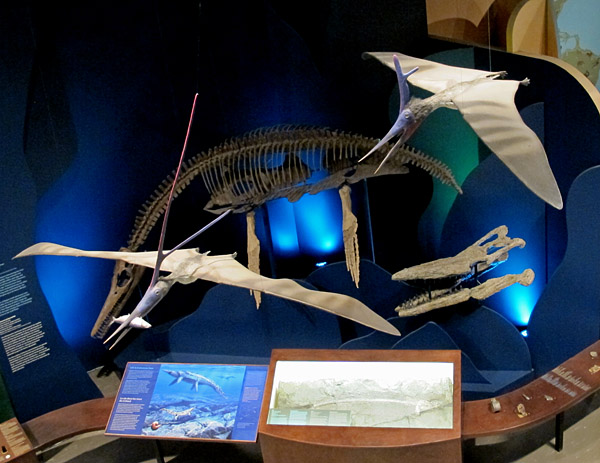 Cretaceous exhibits in the Earth History Gallery: pterosaurs “fly” above the plesiosaur and the mosasaur skull.

What are the Factors that Make an Exhibit “Iconic”?

In the last little while we have been working on the plan for a new exhibit in the Museum’s Earth History Gallery, which will be focused on a large specimen that we recently added to the collections. Around here we like to refer to the specimen and the planned exhibit as “iconic.” But what does iconic really mean? And what makes an object or exhibit iconic?

It seems to be the case that words that were once relatively obscure can become popular, and have their time in the media spotlight before once again slipping into comfortable obscurity (see my post about the word curator  from a few months back). Like curator, icon is currently a popular word; its formerly limited religious application is now being expanded to computing, linguistics, and popular culture. It is the latter meaning that is applicable to museum exhibits, and the Oxford Dictionary says that an icon is “a person or thing regarded as a representative symbol or as worthy of veneration.”

Veneration, of course, means respect or reverence. An iconic exhibit must be one that will be admired, honoured, or thought highly of by many of the people who visit the Museum. The creation of an iconic exhibit is, therefore, a rather demanding prospect for the Museum’s exhibit team, since it must be more exciting than many of the other exhibits at the Museum, and more memorable than most of the exhibits they will have seen in other museums! 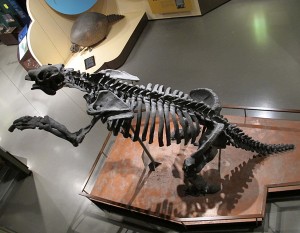 The Museum’s Megatherium has been exhibited for more than 130 years!

For an exhibit to be iconic, I think it really needs to have “legs.” It has to have the potential to last not just for years, but for decades, and to be effective throughout that time. It has to be the sort of exhibit that can excite the children when it opens, but that will also be memorable to those same people when they revisit the museum years later as adults, and to excite their children. That sounds like a high order indeed, but how can we consider something to be “revered” unless it is long-lived?

I was contemplating this question a few weeks ago, as I visited the collections building of the New Brunswick Museum in Saint John. The New Brunswick Museum is very different from The Manitoba Museum; one of the biggest differences is that their collections are not stored at the same place where the public view the exhibits. In Winnipeg we have our collections in various spaces within the same large museum building, but in Saint John the exhibits are in a rented space at Market Square near the middle of town, while the collections occupy much of the building that used to be the public museum, located more than two kilometres away on Douglas Avenue (near the Reversing Falls). 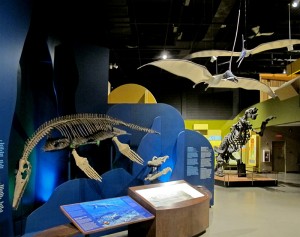 Since the current New Brunswick Museum’s exhibits were largely created new since 1990 (though of course some specimens and artefacts were relocated there from the old museum), the exhibit halls lack the sorts of long-lived exhibits that are so important at The Manitoba Museum. Some of our major exhibits such as the Nonsuch, the polar bear, and the Urban Gallery have all seen little change in forty years or more. The New Brunswick Museum may lack that sort of long-lived exhibit in its current galleries, but as I studied collections located in the former galleries, I was struck by how vividly I could recall the “ghosts” of some exhibits I had visited there as a child. Old New Brunswick Museum exhibits such the Hillsborough mastodon, the giant sturgeon, and the shipbuilding gallery all had a great impact on me, and were probably influential in my choice of a museum career.

I know when I talk to life-long Winnipeggers that our Museum has had the same sort of impact on them, as they recall with fondness some of their visits to our galleries in the 1970s and 1980s. Some older Winnipeggers, though, have similar feelings about the former Manitoba Museum, which was located in the Civic Auditorium (now the Manitoba Archives Building) from about 1932 to 1970. And the exhibits of that old museum were largely lost or removed from public view when the collections were transferred to the current Manitoba Museum. 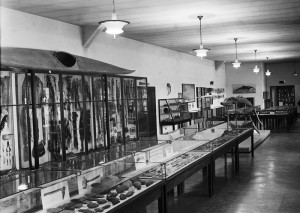 The old Manitoba Museum, housed in what is now the Manitoba Archives Building

Since The Manitoba Museum is already a place that houses many iconic exhibits, it is incumbent on us to try to keep these as we go forward in the development of new “icons.” Fortunately, from my observation of gallery planning, we are very respectful of the institution’s past, and though we have lost a few exhibits over the years, we have also taken extraordinary steps to ensure that others have been saved and refurbished. As we go forward, and as this institution is itself gradually becoming a historic site (this is hard for us to perceive, but it IS happening!), we will need to ensure that the best and most important of our old exhibits are preserved, with perhaps an occasional updating or “burnishing” to maintain their iconic status. People will always want to come to see the Nonsuch!

For our new exhibits to become icons, we need to always be considering the elements that give them the “wow” factor, that will take away the visitor’s breath, either on first sight or after slight contemplation. The most obvious iconic attributes will be in the exhibited objects themselves, which may be large, or splendidly beautiful, or unique. Again, the Nonsuch is an obvious example, but we have many others: the ground sloth (Megatherium), the giant trilobite, the elk diorama, and many of the artefacts in the Hudson’s Bay Company Gallery. In addition to the specimens and artefacts, though, there are many other factors. Cases are designed to optimize viewing by all visitors, and nowadays the Museum pays immense attention to factors such as lighting, colour schemes, graphics, and text readability. 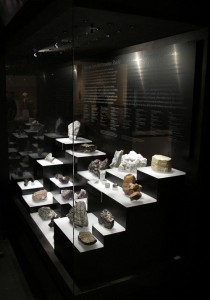 One of the Museum’s mineral cases: lighting and design are critical to modern exhibits.

Of course, there are also the technological elements, which are constantly grappled with by all modern museums. These can frustrate museum staff and they can sometimes torpedo an otherwise solid exhibit, but when they work they can elevate an exhibit to iconic status. I hope that will be the case for our Ancient Seas exhibit, opened a few years ago and a solid favourite of some of our younger visitors. I was very pleased a few weeks back when my friend Cortney posted a photograph of her daughter Teagan, with the statement, “enraptured by the Ancient Seas exhibit, every time.” 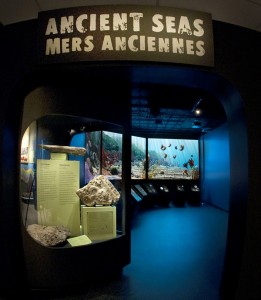 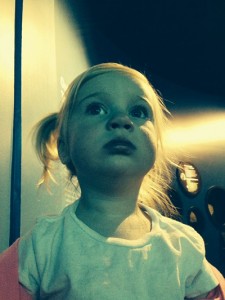 Those of us working at the Museum need to endeavour to find a way to share all of our treasures, but at the same time we should have no room for exhibits that are “worthy but dull.” We have to strive to “enrapture” all of our visitors! This is a big and exciting challenge as the Museum continues to develop and evolve.