A blog about a (yule) log: Plants of Christmas

The use of plants during Christmas arose from pagan Yuletide celebrations of the winter solstice in ancient times. The pagan beliefs have become interwoven and associated with the Christian festival of Christmas, which occurs during the same season. Those plants which remained green, flowered or bore fruit in the darkest season of the year were felt to have special powers. These powers could be invoked by appropriate ceremonies and could renew the vigour of family and herds, and ensure abundant crops during the coming year.

The tradition of the Yule Log in Europe goes back to prehistoric tree worship and the custom of re-kindling the hearth-fire each year. A log burnt on Christmas Eve was believed to give protection from ill-luck for the following year. The ashes of the log were strewn on the fields to promote good crops and charcoal from it was believed to heal many ills. In many parts of Europe and Britain, an elaborate ceremony of bringing in the Yule Log, “greeting” it with corn and wine and accompanying it with carols has been followed for centuries.

Mistletoe
Revered by the Druids of ancient Britain, mistletoe was believed to have magical powers. Called “all-healer”, it protected against poison and made barren cattle fruitful. Kissing under the mistletoe is an old English custom, perhaps associated with the belief that the plant would transfer its protection to the person kissed. European Mistletoe (Viscum album) is only partially parasitic on evergreen trees; it still produces green leaves and manufactures some of its sugar. In Canada, we only have Dwarf Mistletoe (Arceuthobium) which is completely parasitic and much less pretty. 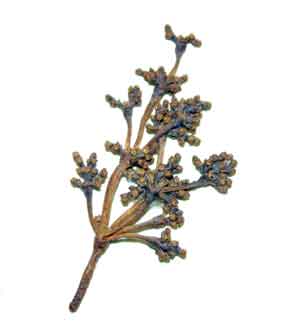 Dwarf mistletoe is entirely parasitic unlike its European counterpart that is only partially parasitic and has leaves.

These evergreen plants, which bear fruit in winter, were considered examples of the continuing vitality of the plant world. Originally used as Christmas decorations in England, they were believed to transfer their vitality to the people whose homes they graced. In ancient legends, holly (Ilex) represented the male and ivy (Hedera) the female.

Yule straw was an important part of European winter celebrations.

In Sweden and Poland, it was the custom to place straw under the Christmas Eve tablecloth. Sometimes a sheaf of grain was also brought in to stand in a corner, bringing the wholesome influence of the corn spirit into the home. The straw was then used to bind fruit trees or as feed for cattle to make them fruitful.

The Christmas Tree
Evergreens have always been considered special or sacred trees because they remain green throughout the year. Long before the Christmas tree as such became a part of the Christmas tradition, garlands and boughs of evergreens were used to decorate houses and other buildings at that time of year.

Legend has it that Martin Luther set up the first real Christmas Tree, a fir decked with candles for his children. Whether this is true or not, the Christmas Tree is indeed of German origin and was first mentioned specifically in 1605. In Germany, it is called “Weinachtsbaum” (Sacred Night Tree) or Tannenbaum (Fir Tree). In Canada Christmas trees are typically spruce (Picea), pine (Pinus) or fir (Abies) trees. 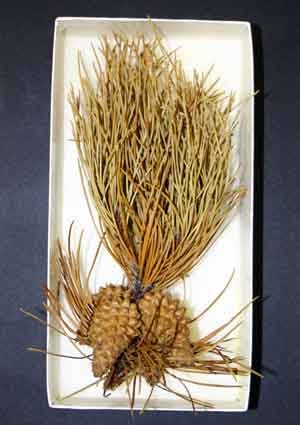 Pines are popular Christmas trees. This is a specimen of Lodgepole Pine in the Museum’s collection.